The most successful reptile in the world

Portrait of the forest lizard 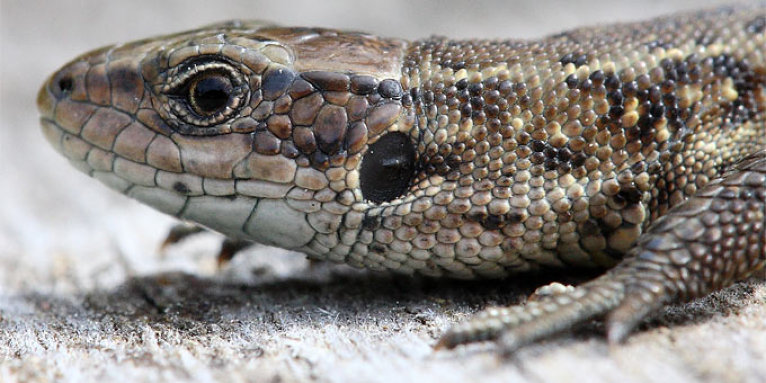 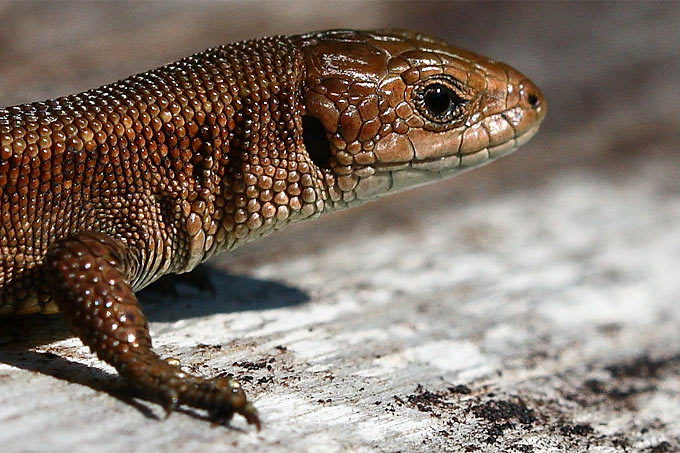 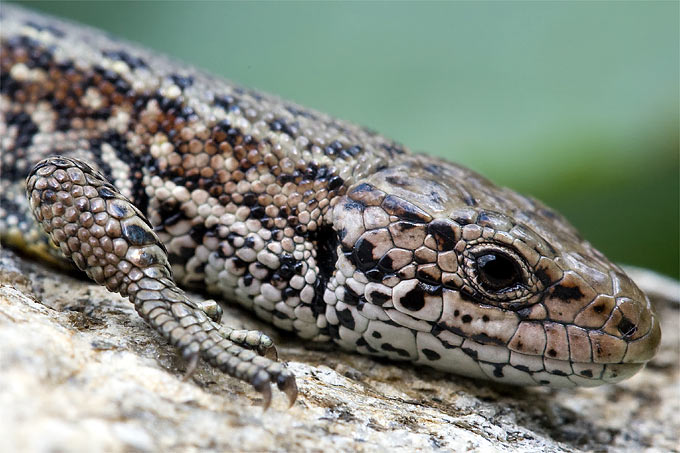 The forest lizard (Zootoca vivipara) belongs to the real lizards, the Lacertidae family. With a maximum total length of 18 cm, the forest lizard is our smallest native species. The tail takes up almost two thirds of this.

Like all reptiles, the forest lizard has scales. These scales are relatively small on the back. On the stomach and head, on the other hand, there are regularly arranged, large signs. On their upper side, the animals are colored in different shades of brown - from light brown-beige to copper-red-brown to black-brown. The throat and neck are usually light gray. The so-called collar is characteristic: a row of large scales on the underside of the neck. Otherwise the drawing of the animals is very variable.

Males and females can be clearly distinguished from one another. The females usually have two dark side stripes and a dark back stripe, this is more or less dissolved in the males. The ventral side of the females is yellowish or light brown with few or no points. The males show a strong color of the underside from yolk yellow to deep red with numerous black dots and spots. The males also have slightly larger heads and thicker tail roots than the females. The newly born young are bronze to blackish brown with a blackish tail.

The scientific species name vivipara suggests: As the forest lizard, it does not lay eggs, but is the only one of the native lizard species to be viviparous. Strictly speaking, it is ovoviviparous - that is, it lays up to ten eggs with a thin, transparent shell that bursts open during birth. The young animals are immediately completely independent. In the womb, however, the embryos are not supplied by the mother organism, but instead feed on the yolk in the egg shell. 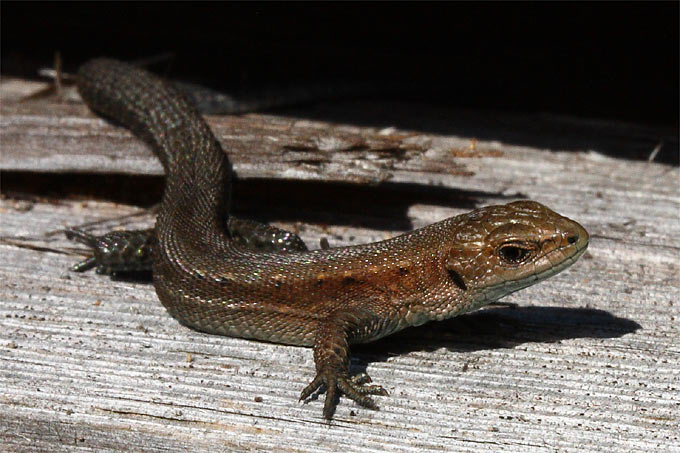 The development of eggs in the womb makes pregnant females difficult to move. The advantage of this, however, is that the forest lizard uses the heat of the sun, without which the eggs cannot develop, much better than other species. When the sun wanders, the pregnant female simply wanders with it, and the eggs never have to lie in the cold shade.
Thanks to this peculiarity, the forest lizard can also penetrate into the cold polar region and at high altitudes in the mountains where most other lizard species can no longer live.

It is noteworthy that in recent years in the Pyrenees and the Eastern Alps (Slovenia, Upper Italy and Carinthia) populations of the forest lizard have been discovered, which, like the other lizards, lay eggs. Why this is so has not yet been clarified.

Habitat and nutrition
The forest lizard has other common German names. In northern Germany it is also called the bog lizard, while in the south of the republic it is called the mountain lizard - always according to its main regional habitat.

The forest lizard is a ground-dwelling animal that rarely climbs. The animals love to sunbathe on old wood, for example on piles of wood and tree stumps or on boardwalks, boardwalks and wooden bridges.

It is found mainly at the edges of the forest and in clearings in the undergrowth. Forest lizards are also typical inhabitants of swampy and boggy habitats and inhabit our low mountain ranges as well as the Alps above the tree line.

Small insects and spiders make up the main part of the diet of forest lizards. In contrast to many other lizards, this species disdains fruits, flowers and other parts of plants.

Distribution with superlatives
The forest lizard occurs almost everywhere in Germany. The species is only absent in the marshland on the North Sea and in heavily agricultural regions, such as the Magdeburg Börde. Overall, the forest lizard likes it a little more humid and cooler than its native relatives. Their hibernation is often over by mid-February.

The forest lizard occurs throughout Northern and Central Europe. Their distribution extends over the temperate North Asia to the Pacific. Among the native reptile species, the forest lizard beats all records: Ireland is the most westerly distribution area, to the east its area extends to the islands of Sakhalin and Hokkaido in the North Pacific. No other reptile can be found this far north: the forest lizard also feels at home on the coast of the Arctic Ocean and the Russian Barent Sea.

Dive in if there is any danger
In the event of disturbances, the forest lizard takes to safety in the undergrowth, under dead wood or in holes in the ground. However, it does not always succeed in doing this without any problems and so, like other lizard species, it is able to throw its tail off at pre-formed break points in the event of danger. While the twitching tail section attracts the attention of predators such as kestrels and house cats, the now tailless lizard can flee into the thick undergrowth.

The tail grows back at least partially within a few months, but no longer reaches its original length. Forest lizards living near water sometimes go to diving stations in supposedly dangerous situations. They hold their breath for a few minutes and hide between aquatic plants and then carefully probe the situation on the surface of the water.

Human hazard
The forest lizard is one of the less endangered native reptiles, but overall relatively little is known about the frequency of occurrence and population development of the species. At least regionally, it is apparently increasingly in danger - above all through the destruction of its habitats, such as bogs and heaths, fallow land, field hedges or roadsides.

Even if small structures such as lying dead wood or piles of stones are cleared away, important parts of the habitat for the species are lost.
Regular mowing of embankments and filling older gravel pits with earth are also dangerous for the forest lizard. Habitat is also lost when ruderal areas, i.e. fallow areas, are used for agriculture or built on again.

Preserve living space
The forest lizard is helped when its habitat is no longer restricted: when moors and wetlands are not drained, when heather areas and ruderal areas remain what they are, when humans don't start clearing up the forest, but let dead wood and tree stumps rot. Above all, clearings should be preserved as sun islands in the forest so that the reptile can warm up there.

You can actively help the forest lizard by networking biotopes, piling up dead wood or building piles of stones. Road edges exposed to the sun, hedges, forest edges or old railway lines should be cared for carefully and not blindly mowed. Because this lizard can also live well in houses and allotments if the appropriate structures are available and there are not too many cats around.

Do you have questions?