Who was the most famous emperor in India

The history of India

Before the colonial era

The oldest human culture in India is probably the Indus culture, which developed around the years 2,800 to 1,800 BC in the valley of the Indus in northwestern India. During this time the settlements Mohenjo-Daro and Harappa were built by the high culture witness to civilization. The religion of Hinduism can be traced back to the Indus culture.

But in the years 2,000 to 1,500 BC, Aryan tribes from Central Asia advanced into the Indus Valley. The original inhabitants and the Aryans formed a new culture. From around the 6th century BC, Buddhism and Jainism developed in India and gained importance over Hinduism and the caste system.
The first Indian empire was the Maurya Empire in the years 320 to 180 BC. It was founded by Chandragupta Maurya in the northern region of India. His son Bindusara later expanded the kingdom to the south. Emperor Ashoka the Great expanded the Maurya Empire even further, in which the Buddhist religion and art were of great importance.

The Gupta empire founded by Chandragupta II lasted from 319 to 606 AD. Thereafter, Buddhism and Jainism lost importance compared to Hinduism.

In the north of India, after the conquest of Delhi by the Muslims, the Sultanate of Delhi was established. Between 1192 and 1206 AD the plains of the Ganges were conquered by the Muslims and from 1206 to 1290 the so-called "slave dynasty" ruled.
In the Mughal Empire, which lasted from 1526 to 1858 AD, architecture and art in particular played an important role. During this time under the Muslim emperors, among other things, the famous Taj Mahal in Agra was built. 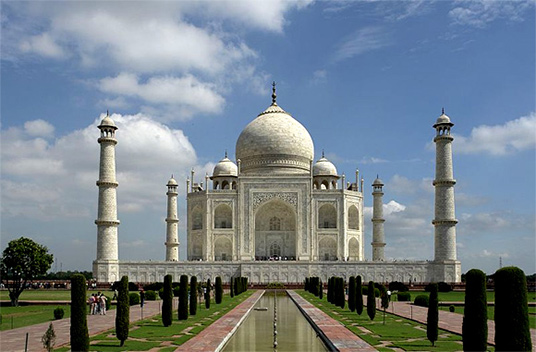 In 1498 Vasco da Gama made the sea voyage to India and Portuguese India arose. From 1756 the "British East India Company" initially positioned itself in what is now Mumbai, Calcutta and Madras. But power struggles broke out between the English, French, Dutch and Portuguese comers, which culminated in the “Battle of Plassey” in 1757. First the east of India and later the whole country were immediately under the rule of Britain, which profited economically from the raw materials of India. One of the measures taken by the British was the ban on widow burning.

At the beginning of the 19th century, the parts of India were ruled either directly by the British conquerors or by local rulers who were subordinate to the British. Therefore, in 1857, India's first war of independence broke out. The rulers and Bahadur Shar, the last ruler of the Mughal empire, decided to initiate the "Sepoy uprising". But the Mughal was abducted to Burma, where he died. The British fought the insurgents in the bloodiest of ways.

But from the end of the 19th century the call for India's independence from the Hindus and later also from the Muslims became louder and louder. It was the lawyer and Hindu Mahatma Gandhi who finally campaigned for nonviolent resistance to colonization by the British and led the independence movement. After the end of World War II, Gandhi had achieved his goal and on August 15, 1947 the colonial days of India were finally over. The now independent India was divided into India and Pakistan.

After the colonial era

However, around seven million Muslims were subsequently expelled from India. The number of Hindus and Sikhs expelled from Pakistan is as high as ten million. Hundreds of thousands of people died.

The conflict over the Kashmir region, which continues to this day, led to the first war between India and Pakistan in 1947.

In 1950 India became a parliamentary-democratic republic. In 1962 the border war between India and China broke out and in 1971, after another war against Pakistan, which was then divided, the country of Bangladesh emerged. From 1947 to 1964, Jawaharlal Nehru was the Prime Minister of India. In 1966 his daughter Indira Gandhi followed. She was convicted in 1975 for influencing the elections, whereupon she declared a state of emergency and continued to rule until 1977. She was not re-elected and was sentenced to prison. The left-wing Janata Party ruled the country until 1980, while before that only the Congress Party had been in power.

But in 1980 Indira Gandhi was reappointed Prime Minister of India. During her tenure, she was confronted with the Sikhs' demands for a state of their own. The Golden Temple in Amritsar was occupied by them, whereupon Indira Gandhi had it forcibly evacuated. This led to their murder by their Sikh bodyguards. Her son succeeded her as Prime Minister and was also murdered in 1991. However, he was only in office until 1989 when the Janata Dal party was elected.

All entries in this category:
<?