What should you never say to RuPaul

Supermodel and our queer mother

In the category # essence things we want to bring you closer to people whom we admire and love for their creative work, their activism and their commitment. Based on a quote, we will show you why this person inspires us. Today: RuPaul.

"If you can't love yourself, how in the hell you gonna love somebody else? Can I get an amen? "

(loosely translated: "If you can't love yourself, how the hell can you love someone else? Do I get an amen for that?")

Supermodel of the world and the first chart successes

RuPaul Andre Charles was born in San Diego on November 17, 1960. After his parents divorced, RuPaul and three sisters grew up with their mother. At the age of 15 he went to Atlanta to study performing arts. In the 1980s he had rather mediocre success as a musician and filmmaker until he first received major attention in 1989 with a guest appearance in the music video "Love Shack" by the B52’s.
At the beginning of the 1990s, RuPaul's fame as a drag queen and with various performance roles that played with gender boundaries, especially in the New York club scene, continued to grow. The breakthrough came in 1993 with the debut album "Supermodel of the world". The single "Supermodel (You Better Work)" became a hit thanks to the music video and MTV. Two years later, RuPaul entered into a modeling contract with MAC Cosmetics and was the first international drag queen to be the face of a cosmetics company. In 1996 RuPaul got his own talk show, "The RuPaul Show", in which he and Michelle Visage received numerous celebrities. A sensation for the US context of the 1990s: a drag queen with her own talk show that openly talks about discrimination and the self-empowerment of blacks and women. 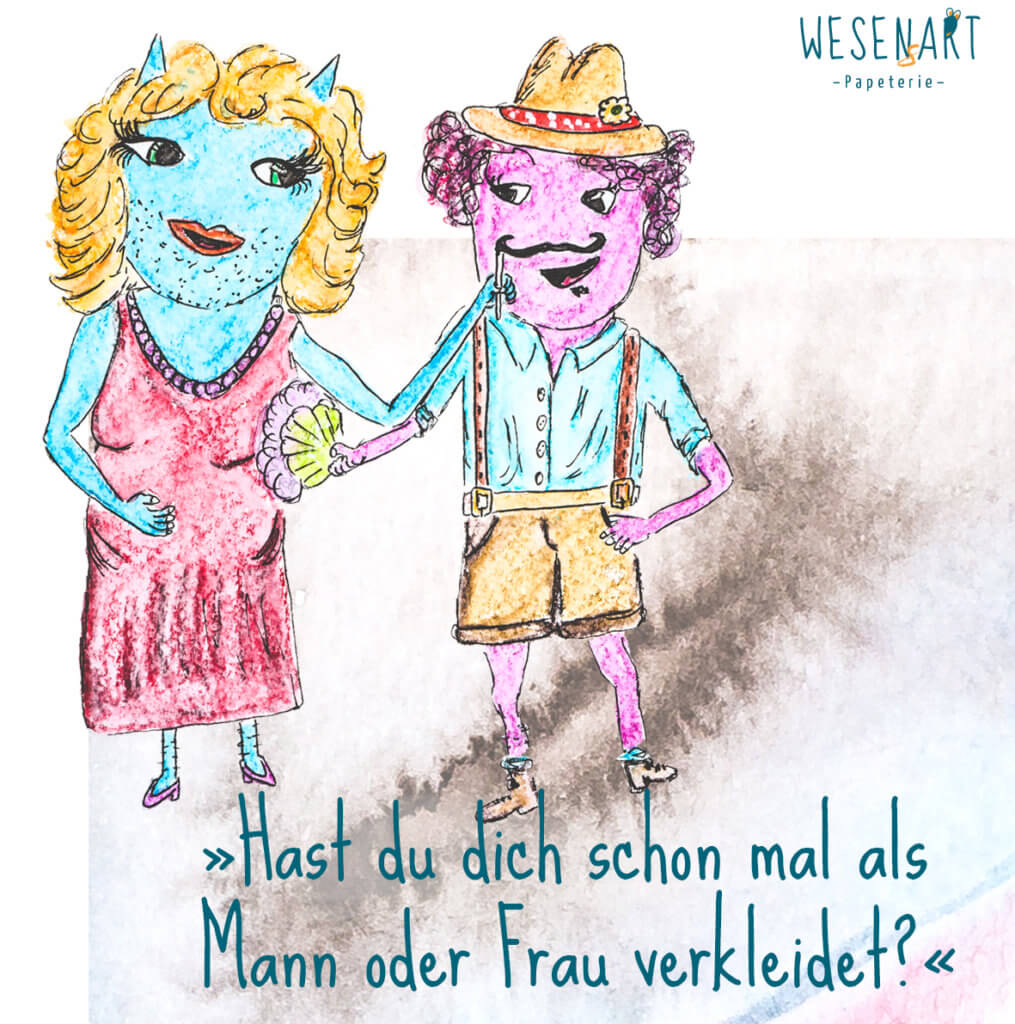 The beings ask you: "Have you ever disguised yourself as a man or a woman?"

Several albums followed, all of which had chart positions, and various film roles. Until 2008 it was announced that RuPaul was working on a reality casting show format for Drag Queen. In February 2009 the first season of "RuPaul’s Drag Race" and at the same time RuPaul released the fifth studio album "Champion" with the hit single "Cover Girl". What began as a low-budget production on the small queer channel LOGO TV has become a global mega-phenomenon almost 10 years later. RuPaul has been looking for "America’s Next Drag Superstar" for 10 seasons and with great success. In contrast to well-known top model formats, Drag Race is primarily about empowerment, recognition and a lot of appreciation for drag as an art form and queer culture.

There are now three seasons of the spin-off "RuPaul’s Drag Race All Stars", in which former participants of the show compete against each other again. Fans can experience the queens live at the annual "Drag Cons" trade fairs in New York and Los Angeles. And with »Werk the world« the winners and participants tour the whole world. But Drag Race has not only won millions of fans worldwide, several Emmys (including RuPaul as best presenter) and is a huge show and advertising business. The show mixes art, politics and activism with a lot of humor. It's about self-empowerment and empowerment - and above all about the visibility of queer art and queer life. Because the message that stands above all is love. Love for yourself and for everyone else.

In recent years, RuPaul has been criticized all the more for statements and dealings with tans * participants and trans * issues. And that, during 2017 in season 9, the drag queen Peppermint had her trans * coming out and even took 2nd place on the show.

"Drag says 'I'm a shapeshifter, I do whatever the hell I want at any given time'."

>(in an interview with the Huffington Post, 2017; freely translated: "Drag says: I am a shapeshifter, I do whatever I want, at any time.") 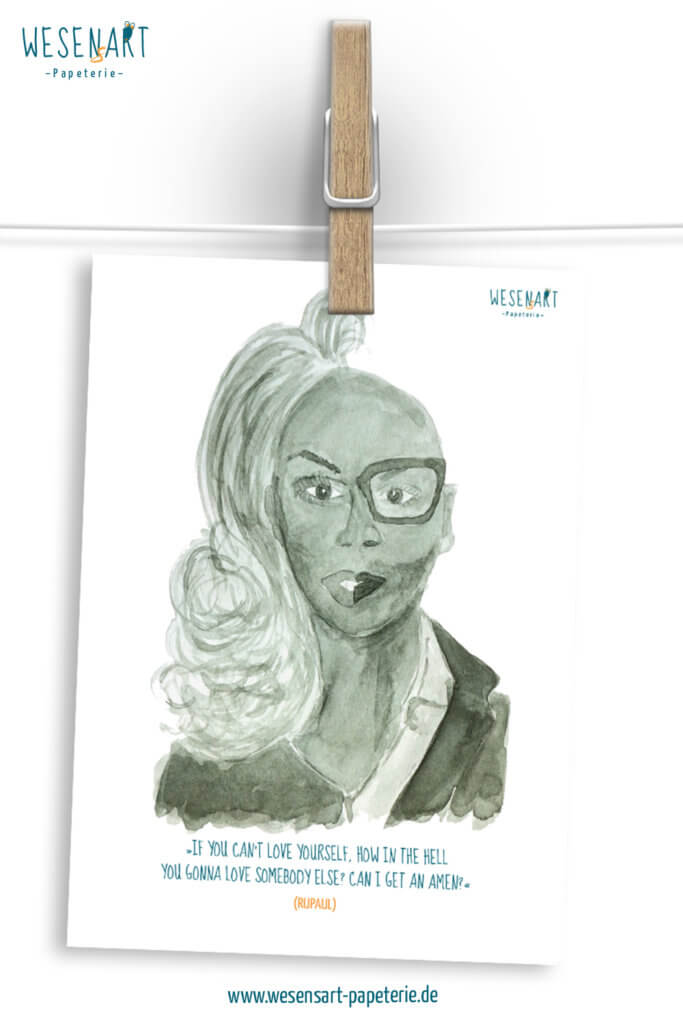 Watercolor portrait of RuPaul on one side with and without drag.

RuPaul is the head of a global mega-business. And to achieve that as a black, queer drag queen deserves endless recognition. But RuPaul is much more than that.
For countless queer people, RuPaul is a symbolic figure with a mother character. A symbol of love, success, and breaking gender roles, and a mother who empowers, cheers, and helps overcome violence, trauma, and pain. RuPaul has managed to bring drag as an art form into the mainstream, to give drag queens a platform and thereby to move queer issues into the social center. While it is rather disturbing that top model formats influence young women with endless sexism and body hatred, it is a ray of hope that young queer people today are growing up with TV formats like Drag Race.
RuPaul shows that gender is not something rigid and solid, which only exists in two categories, but a party. A party full of glitter, irony and self-love.

... UNIQUE DRAG RACE!
If you haven't checked through all of the seasons, it's high time you did. So much the better that seasons 7 to 10 are on Netflix.
If you're new to drag racing, you should start with Season 9. Because political issues are dealt with more present than in the previous seasons and there are the best challenges. In addition - ACHTUNG SPOILER - Sasha Velor has won and she is currently not only cleaning up gender categories and fashion week catwalks, but also seems to be becoming the new drag icon in the mainstream.
And if you're already a drag race pro, you can look forward to the fourth season of Drag Race All Stars with us, which will be on VH1 from December 14th.

Why do you love RuPaul?

Tell us in the comments. 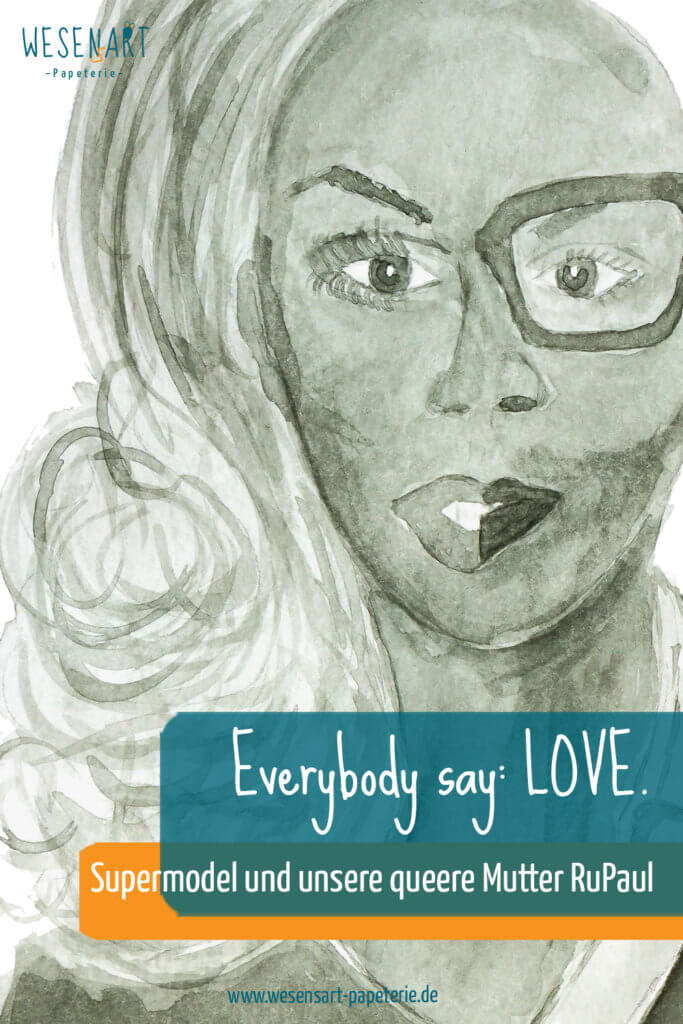 Watercolor portrait of RuPaul on one side with and without drag and title of the article "Everybody say: Love."