Why did people want slaves?

The wounds of slavery do not want to heal

For a long time the traces of this gigantic crime lay hidden. On the arrival of his Italian bride in September 1843, Emperor Pedro II had quickly filled in the quay of the old port of Rio de Janeiro. Seven hundred thousand slaves went ashore here between 1774 and 1831, more than any other place in the world. But the emperor did not want to know anything about it.

The Africans who did not survive the Atlantic passage were carried up the adjacent hill and thrown into a heap between household rubbish and dead cows. In 1996 a family discovered this "Cemetery of the New Blacks" (Cemitério dos Pretos Novos) under the foundations of their house. The memorial they set up is about to be closed today, and the city has not paid a penny for over a year.

The old harbor district, Rio's "Little Africa", has been a Unesco World Heritage Site for a year, with the excavated slave quay as the centerpiece. Actually a tourist magnet par excellence. But the memory of slavery seems undesirable to official Brazil even today.

On May 13, 1888, Crown Princess Isabella ended slavery with the "Golden Law". Without a bloody civil war, as in the USA, and without a successful slave revolt, as in Haiti in 1794. After England had banned the transatlantic slave trade in Brazil in the "Aberdeen Act" in 1845, there was a labor shortage on the plantations there. This was increasingly offset by European immigrants, who worked more efficiently than the rebellious slaves. 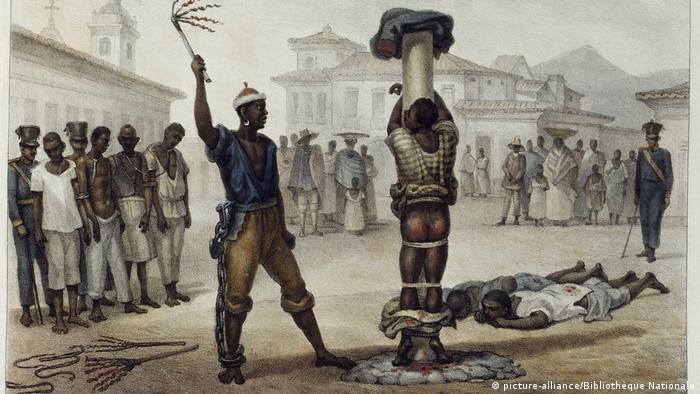 The historical lithograph shows the whipping of black slaves in Brazil

It was only when the economic system of slavery ran dry that Brazil ended it. As the last country in all of America. The record of 350 years was staggering. Every second African kidnapped across the Atlantic ended up in Brazil. Two million in Rio alone, 5.8 million in total along the Brazilian coast.

Brazil's plantations were insatiable for human supplies. It is estimated that every tenth African died on the crossing. When they arrived in Brazil, the families were separated. The men were sent to work in the fields in the most remote regions, while the women raped by their white masters gave birth to new generations of Brazilians. The exploitation of nature and man was not enough for the white gentlemen; they literally dominated their subordinates down to the flesh and bone.

Helplessness instead of celebration

Even so, the belief that slavery was more humane in Brazil than anywhere else has persisted to this day. The pictures and reports from that time, which seldom depicted the cruel reality, contributed to this. Their liberation in May 1888 was not the officially announced celebration for the slaves, but mostly an economic catastrophe. Without a piece of land, a penny of start-up capital or any education, they were handed over to their fate. And there they are still standing.

Millions of Afro-Brazilians today live in the same precarious circumstances as their ancestors freed 130 years ago. The poor favela huts on the Brazilian periphery resemble those of the 19th century. Millions of Brazilians still haven't arrived in Brazil. Two thirds of the roughly 60,000 victims of violence every year are young blacks, as are two thirds of prison inmates.

For them, Brazil offers no other perspective than the cycle of violence that began in the time of slavery, the rebellion against hostile society and against themselves. While whites are inviolable then as now, they direct their violence against themselves in hopelessness and self-loathing .

The legacy of slavery cannot be shaken off easily, says Contardo Calligaris, an Italian psychoanalyst who has lived in Brazil since the 1980s. Every Brazilian carries the figure of the "colonizador", the brutal dominant and "exploiter". "All relationships in the power structure of Brazil are inhabited by the ghosts of slavery," said Calligaris. Power is always expressed as physical domination over the other, a poltergeist of slavery that does not want to go away. 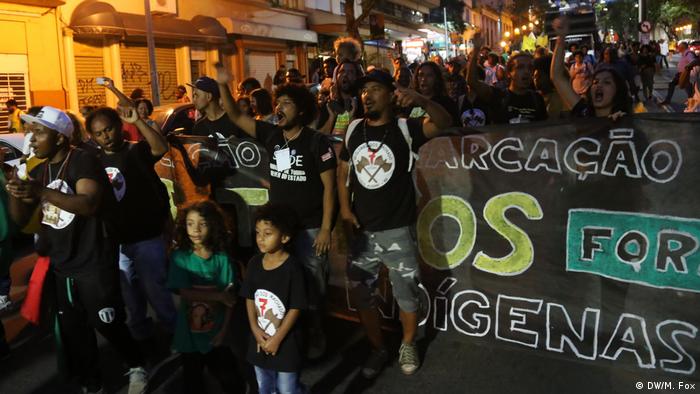 Demonstration of descendants of slaves on Black Awareness Day

Slavery itself has not disappeared either. "One still imagines the chained galley rowers à la Hollywood among slaves," says the French Dominican Xavier Plassat. "But instead of chains, people are now enslaved by economic dependencies." Plassat has been fighting modern slavery with Catholic clergy since the 1980s. At their pressure, the government passed a law against slavery in 1995.

Since then, 54,000 work slaves have been freed. They toiled without a fair wage on the cattle pastures of the Amazon region, in the illegal sewing factories of São Paulo or on the charcoal piles of the northeast. At the end of 2017, President Michel Temer surprisingly tried to soften the concept of modern slavery by removing the element of economic obsession as a criterion. But in the face of global indignation, Temer quickly rowed back.

The shadow of slavery can only disappear if Brazil's dark-skinned population finally becomes the protagonist of their own history, believes the Black Movement activist Celso Athayde. With the "Frente Favela Brasil" he founded the first party for blacks. This earned him the allegation of discrimination against whites. You saw what happened when the samba schools opened up to whites, says Athayde. Within a very short time they would have been in charge there. That shouldn't happen to his party.

Whites would never be satisfied with a supporting role, they always have to set the tone, so Athayde. "We blacks, on the other hand, like to hide behind the whites because we are afraid of the main role. But we must finally learn to take on this main role."