What a mushroom you are

Mushroom Picking For Beginners: The Best Tips For The Mushroom Season

Autumn is approaching and with it the main mushroom season. You can collect them in the woods and meadows and use them in delicious mushroom dishes. So that collecting is fun and there are no minor or major difficulties, you will find the most important tips for collecting mushrooms here.

First of all: only collect mushrooms that you know

First of all, the most important rule: Only collect mushrooms that you can identify with certainty and that you are absolutely sure are edible. Just leave all other mushrooms standing, because the damage to health from just one poisonous mushroom can be serious or even fatal.

Porcini mushrooms, chestnut boletus, chanterelles, meadow mushrooms and parasol mushrooms are among the tasty mushrooms that are easy to identify and taste delicious. 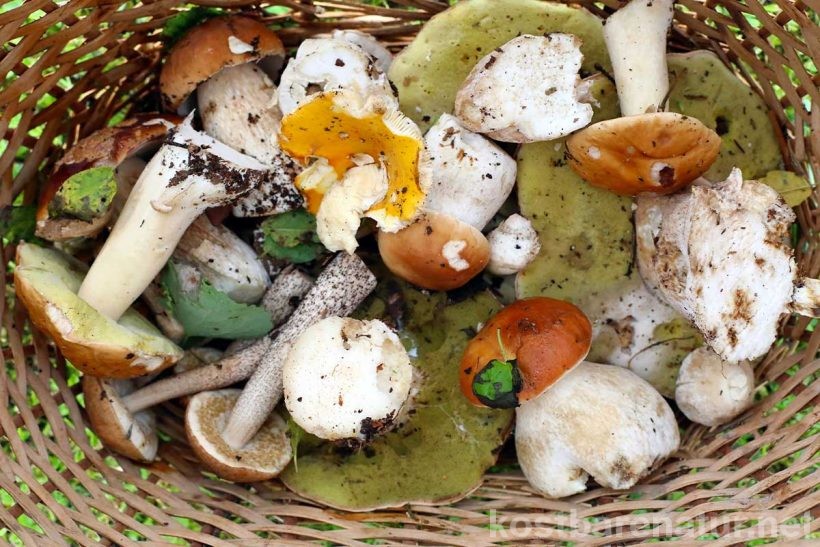 If in doubt: ask for advice on mushrooms

The assessment of mushroom experts, for example on guided mushroom hikes, can help to get a better and better feel for collecting over time.

In almost every larger town there are mushroom advisors or mushroom experts who have been tested by the German Society for Mycology (DGfM). On a DGfM service page, you can find out where you can find the nearest mushroom expert in your own postcode area, to whom you can show the mushrooms you have collected.

Some experts also offer guided mushroom hikes, during which, in addition to knowledge about individual mushrooms, a lot of interesting information about the place where they were found, the relationship between soil conditions and mushroom occurrence, etc. is imparted. By phone or email it can be clarified whether and when the expert is offering a tour.

Clothes, knives, basket and Co. - with the right equipment, your mushroom hike will be an all-round beautiful excursion. 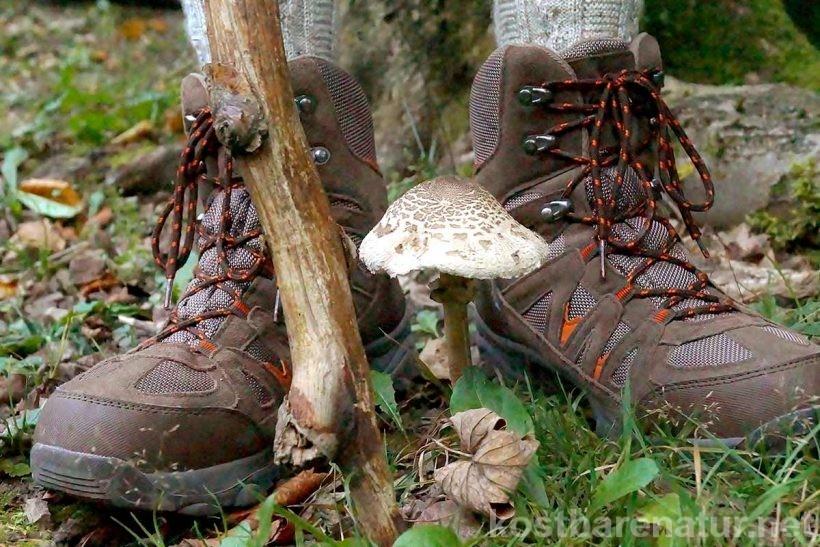 When is mushroom season?

The main mushroom season in Central Europe is in autumn, when it is still warm and humid due to increased rainfall. However, some mushrooms also grow earlier or later in the year. Here you can find the main collection times for popular edible mushrooms:

In years with little rainfall, the mushroom harvest is likely to be rather poor, as mushrooms need a certain amount of moisture to grow.

Both methods work, but can be used in different situations. If a mushroom can be identified with certainty, you can cut it straight off just above the ground. The knife is best to be very sharp so that germs cannot get into the subterranean root network (mycelium) through fraying at the cut. It also increases the chance that other mushrooms will grow back in the same place.

On the other hand, if you are unsure about identifying a mushroom, it makes sense to unscrew the entire mushroom and show it to a mushroom expert. Because the lower end of the stem (the base) is also of decisive importance for the unambiguous determination.

It doesn't really matter whether the mushroom is twisted out or gently lifted out. It is important not to tear it out so that the underground mycelium is damaged as little as possible. You can cover the small hole in the ground created by removing the fungus with a little soil so that the root network does not dry out. 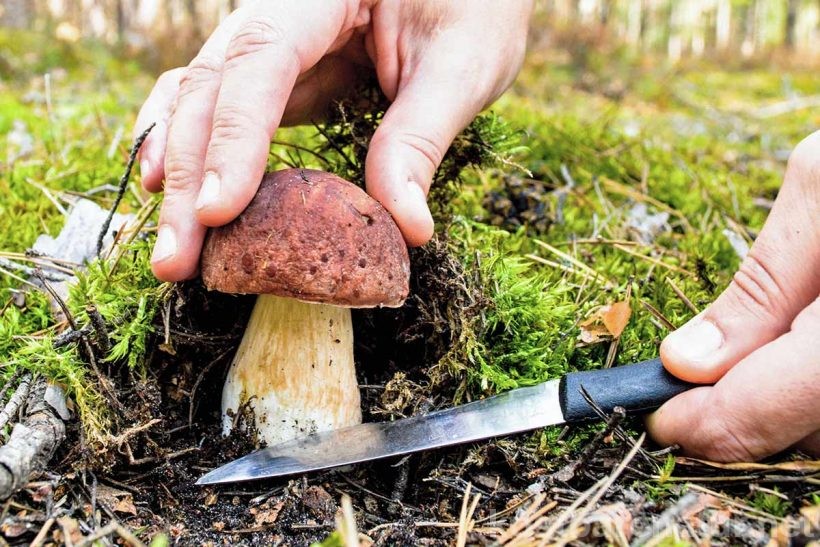 If you have been able to identify all the mushrooms with certainty, it makes sense to at least roughly brush them on the spot. Remove any sticky soil, needles, and leaves with a paintbrush or mushroom brush.

In this way you can also find out immediately whether a mushroom is very worm-eaten, for example, and not worth taking with you. Then other mushrooms have more space in the basket without damage.

Sometimes it is recommended to cut the mushrooms into pieces straight away. Since every cut surface is also a target for germs and accelerates the decomposition of the proteins, it is better to wait until shortly before processing.

Especially if the mushrooms are to be examined by an expert, it is advisable to leave all mushrooms whole in order to enable the determination. 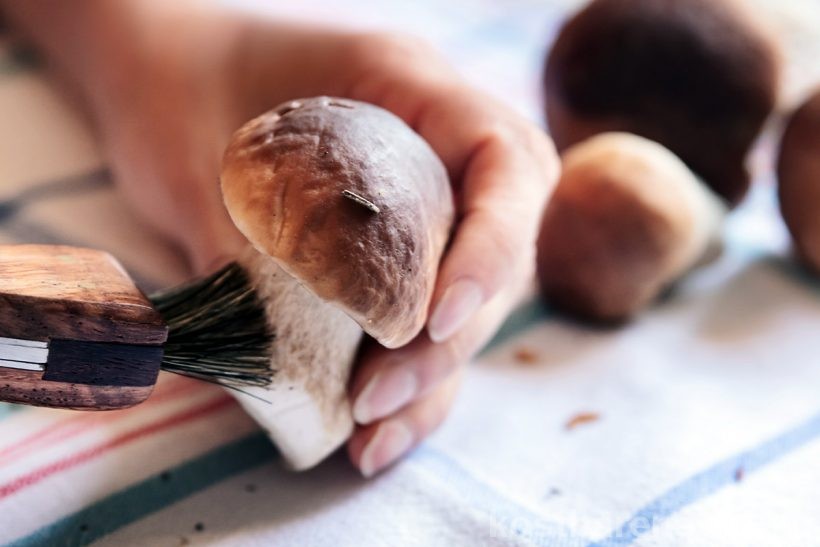 When can mushrooms be picked?

In Germany, mushrooms can be collected at any time of the year and without restriction. In Austria and Switzerland, certain collection times sometimes apply (for example only from the first to the tenth day of each month), which can differ depending on the region and canton. It is therefore worthwhile to find out exactly what time to collect in advance.

Information on collecting mushrooms in Austria can be found at oesterreich.gv.at.

On the website of the Association of Official Mushroom Control Bodies in Switzerland, there is an overview of when mushrooms may be collected in which canton and which special regulations apply in each case.

Where can mushrooms be picked?

In Germany everyone is allowed to move freely in state forests as well as in private forests. You can also collect mushrooms there (see below for the amount). However, there are restrictions because entering the following areas and thus collecting mushrooms is not permitted:

In areas whose soil is still radioactively contaminated after the Chernobyl reactor disaster, it is also worth considering for health reasons whether and which mushrooms are collected there. The map from Umweltanalysen.com shows in which regions the earth still has increased radioactivity. The interactive map of the Munich Environmental Institute shows the current measured values ​​for mushrooms and forest products for Munich and the surrounding area. You can find out in a separate article in which areas it is also better not to pick mushrooms because the heavy metal pollution is too high.

How many mushrooms can I collect?

The federal states and districts in Germany each have their own regulations on the amount of mushrooms that can be collected. Often a lot “for personal use” is allowed. A rule of thumb defines this as about one kilo per person per day. However, it is advisable to check with the responsible authority to be on the safe side. As a rule, this is the lower nature conservation authority, which is usually assigned to the district office.

Anyone who exceeds the permitted amount and is caught must expect a fine of up to 5000 euros for stealing mushrooms. These severe penalties were introduced because some people were gathering kilos of mushrooms from the forests to sell. 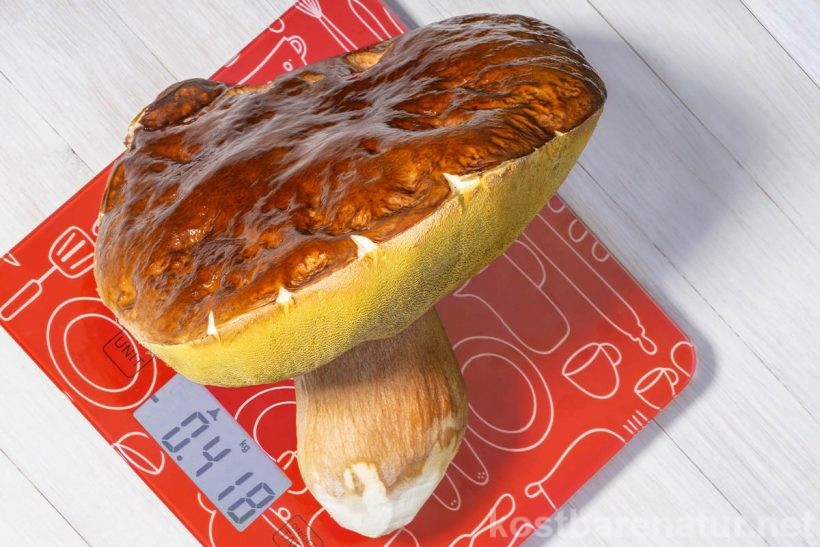 Which mushrooms can I collect?

Mushroom species that are protected by the Federal Species Protection Ordinance may not be collected. However, there are exceptions for mushrooms that can still be collected for personal use (about one kilo per person per day), such as porcini mushrooms, chanterelles, birch mushrooms and morels. If you want to be on the safe side, ask the lower nature conservation authority about the permitted collection amount for protected mushrooms.

Our book tip has a lot of valuable advice not only for collecting mushrooms, but also especially for mushroom identification: 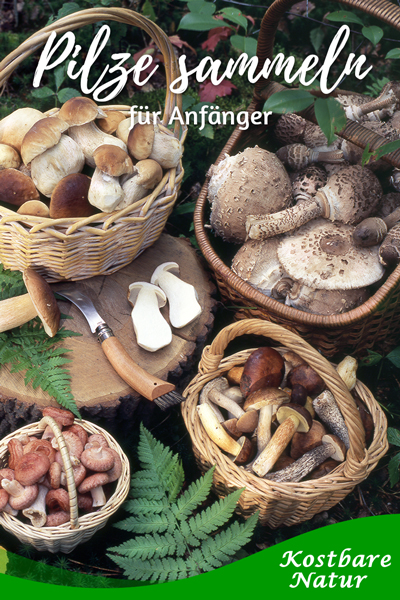