Should the piracy be stopped

Piracy is out of control

The grappling hook is becoming a career tool: "In Somalia, being a pirate is almost an idiot-proof way to get rich quickly," writes Jack Lang, UN special envoy for the fight against piracy, in a report to UN Secretary General Ban Ki Moon. Around 1500 professional pirates now earn their living in Somalia alone by capturing merchant ships. At least 26 freighters and 522 people are currently in the hands of pirates. The ransom money averages more than five million dollars. The salaries of the heirs of Captain Blackbeard are correspondingly high.

According to a recent study by the consulting firm Geopolicity, a pirate can earn 150 times more than most of his Somali compatriots. While the average annual income of a Somalis is around $ 500, pirates earn up to $ 79,000 (56,000 euros) a year - net. This corresponds to about twice the average net income of an employee in Germany.

And piracy can be practiced almost without risk: 19 warships are cruising in the Gulf of Aden. But if they catch a pirate ship, the pirates are usually released without a trial because of the difficult legal situation.

So it is hardly surprising that the pirate industry in the desperately poor Somalia has no recruitment concerns. Geopolicity expects 200 to 400 new pirates to be added each year.

At the very beginning there was self-help. To drive away the large fishing trawlers that deprived them of their livelihoods, Somali fishermen took up arms and became pirates. But those times are long gone. “Today's piracy has become a lucrative industry,” says Kerstin Petretto, research assistant at the Institute for Peace Research and Security Policy at the University of Hamburg in the PiraT research association. And today's pirates not only work successfully, but also extremely effectively.

According to calculations by the American think tank One Earth Future Foundation, the average ransom paid for a hijacked ship has increased thirty-sixfold in just five years: from a good 150,000 euros in 2005 to almost 5.4 million dollars last year. For a supertanker like the Irene SL with 1.8 million barrels of crude oil on board, a ransom of $ 13.5 million was due in April of this year. According to the industry association Intertanko, the charge was equivalent to approximately 20 percent of the United States' daily crude oil imports.

According to the International Maritime Bureau (IMB) of the International Chamber of Commerce (ICC), 26 cargo ships and 522 people are currently in the hands of pirates. Seafarers as well as private shipowners. The two Danes Jan Quist and Birgit Marie Johansen and their three children, for example, have been hostages to Somali pirates with their yacht ING since the end of February. The family is said to be held captive on the hijacked freighter Dover, according to unconfirmed reports. The problem: The pirates 'ransom demands and the money that the Danes' relatives can raise are said to be far apart.

The anchor point of the Dover is known to western military - like all the other hijacked ships. Sea scouts regularly fly over the pirate camps and the ships with the hostages on board. But a military rescue operation is considered too dangerous. While some hostages ended relatively quickly, others, such as the 20-person crew of Iceberg 1, have been waiting for liberation for more than a year. And the crew pays a high price for it - sometimes even with their own lives.

Regardless of these tragic human fates, the pirates also cause increasing economic costs. The One Earth Future Foundation estimates this at seven to 12 billion dollars - per year. The actual ransom of up to $ 148 million is still one of the smaller items, however hard it may hit the individual shipowner. The cost of all the naval units to protect merchant shipping, at $ 2 billion, is far higher. The detours that many shipowners are now using their ships in order to have enough distance from the Somali coast and the pirates also cost up to three billion dollars.

If this is of any use at all. The pirates follow their potential victims into the Arabian Sea and beyond - and thus avoid the massive military presence in the Gulf of Aden, where at times up to 19 warships of the various anti-piracy missions cruise. "The situation in the Indian Ocean is completely out of control," complains Captain Pottengal Mukundan, director of the International Maritime Bureau. While only one ship has been hijacked in the Gulf of Aden this year, according to the IMB, there are 15 off the coast of Somalia. “The pirates now even venture as far as the coast with their mother ships, which can accommodate several small attack boats India, ”says Mukundan bitterly.

Tankers are a worthwhile destination

The tanker shipowners' association, Intertanko, is observing this with great concern. Every day, according to the United Nations' International Maritime Organization (IMO), 3.3 million barrels of oil are transported through the Bab al-Mandab Strait, which connects the Red Sea with the Gulf of Aden. That is 30 percent of the world's oil demand. But also all the tankers that have to go around the Cape of Good Hope because they are too big for the Suez Canal have to go through the Arabian Sea - that is, through the very area in which the pirates are spreading more and more.

And tankers are a worthwhile destination: when fully loaded, the ships lie deep in the water and travel through the sea with far fewer knots than container ships, for example. The pirates noticed that. According to the Federal Police in See, "tankers have emerged as the preferred target for pirate attacks". Almost a third of all raids were carried out on tankers. And it's worth it for the pirates: the ransom for tankers is high, negotiations are fast. The cargo is far too precious to be left lying off the Somali coast for months.

Joe Angelo, Managing Director of Intertanko, knows that. The fact that the pirates have relocated their activities to the Arabian Sea is nothing less than a "game changer" for him. With considerable consequences: "40 percent of the world's crude oil is transported across the Arabian Sea," says Angelo. So far, the hijacking of a tanker is not yet immediately noticeable. But that could change quickly if the pirates weren't stopped soon. "Many governments are still not clear about the full extent and the consequences of piracy off Somalia," says Angelo, who represents 250 shipowners with a tanker fleet of around 3,050 ships.

The geographic radius of piracy now extends to the entire Indian Ocean. “We now need small armed teams on board to protect our seafarers. If the government cannot do that, we need a clear legal framework for the private protection teams. The current vacuum - no protection and no guidelines - can no longer be expected of seafarers, ”complains Ralf Nagel, General Manager of the German Shipowners Association.

False alarmism? The numbers speak a different language. The number of pirate attacks increases every year. According to the IMB, 142 attacks were registered worldwide in the first quarter of this year, more than ever before. The majority of these occurred off Somalia. And German shipowners are often affected. Because their ships often serve the heavy shuttle traffic between East Africa and India, as expert Petretto from the Institute for Peace Research and Security Policy says. The result: of the 445 incidents with pirates last year, 15.5 percent affected German shipping companies - making it number one.

Piracy is an efficient oligopoly

Given all these numbers, all of which are increasing annually, IMF Director Mukundan's outlook is bleak: “We have now reached a critical point. If the international community does not intervene immediately, the situation will undoubtedly worsen dramatically next year. ”If it is not already too late anyway.

For experts like Kerstin Petretto, the critical point was reached the moment the pirates shot the first hostages and the ransom demands rose dramatically. Today an industry with a high degree of professionalization has emerged from the pirate beginnings of yore. There is a kind of oligopoly: There are supposed to be twelve leaders who have perfectly organized the recruitment and training of new staff, the procurement of equipment, the care of more than 500 hostages plus all the pirates and the pre-financing of attacks.

Piracy is a business. Pirates are managers. And because that is the case, the consulting firm Geopolicity draws up a simple and generally applicable equation: As long as the costs and risks do not exceed the benefits and the expected profits, piracy will remain attractive for Somalis. Especially since the alternatives of risking your own life for less money with one of the many civil war militias are by no means better.

Ships hijacked by pirates in the Gulf of Aden 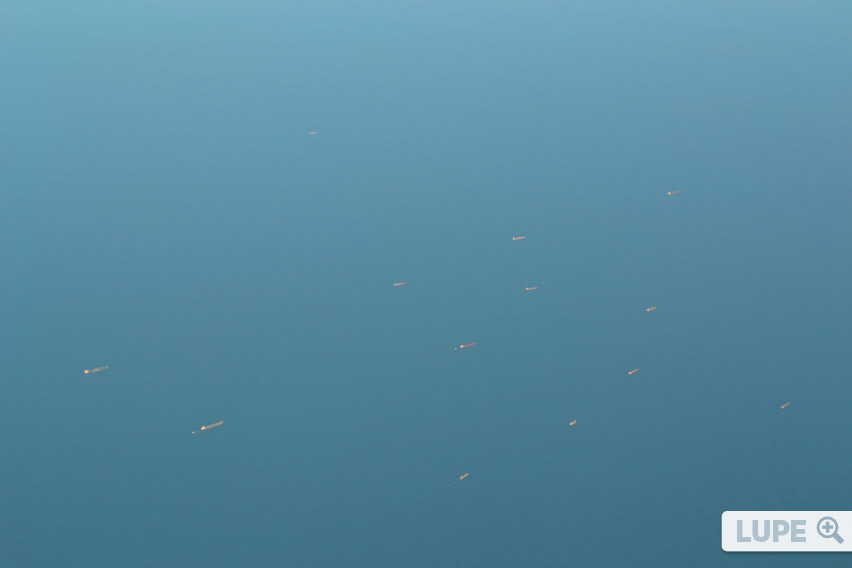 A view out of the window of the P-3C sea reconnaissance aircraft of the German Navy over the east coast of Somalia. From an altitude of about 18,000 feet you are just white streaks in blue sea. But these white lines are ships - 12 hijacked freighters and tankers that anchored off the east coast of Somalia with their crew in mid-April. According to unconfirmed information, these include the "Suez", the "Eagle", the "Yuan Xiang", the "Hoang Son Sun", the "Sinar Kudus" or the "Rosalia D'Amato". If every ship has an average crew of 20 sailors and officers on board, a total of 240 people were held captive on these ships. In the meantime, some of them, such as the “Eagle”, have been released - but the pirates have hijacked new ships in the meantime. Probably the most tragic pirate victim on this recording is the "Iceberg 1". The ship has been anchored here for more than a year. Some members of the crew are said to have already died - allegedly also from starvation. At the upper edge of the picture there is another, a 13th ship: the American destroyer "USS Bainbridge". The small white dots that are connected to some freighters by lines are hijacked dhows or small fishing trawlers. These can be used by the pirates as mother ships for attacks deep in the Indian Ocean.