What if Bruce Lee were alive

Bruce Lee - when you hear this name, you inevitably think of martial arts, Kung Fu and films like "The Man with the Death Claw". "Lee Jun-Fan" - as Bruce Lee is actually called - was an actor, martial arts instructor and icon at the same time. He is still celebrated today as the “King of Martial Arts Film” and is considered by many to be the greatest martial artist of the 20th century.

His films such as “Greetings from Shanghai” or the Death Claw sequels made him internationally known. They convinced not only with impressive fight scenes, but also with Lee's famous charisma. But there is still more to be learned from the life and work of Bruce Lee - especially about success ... 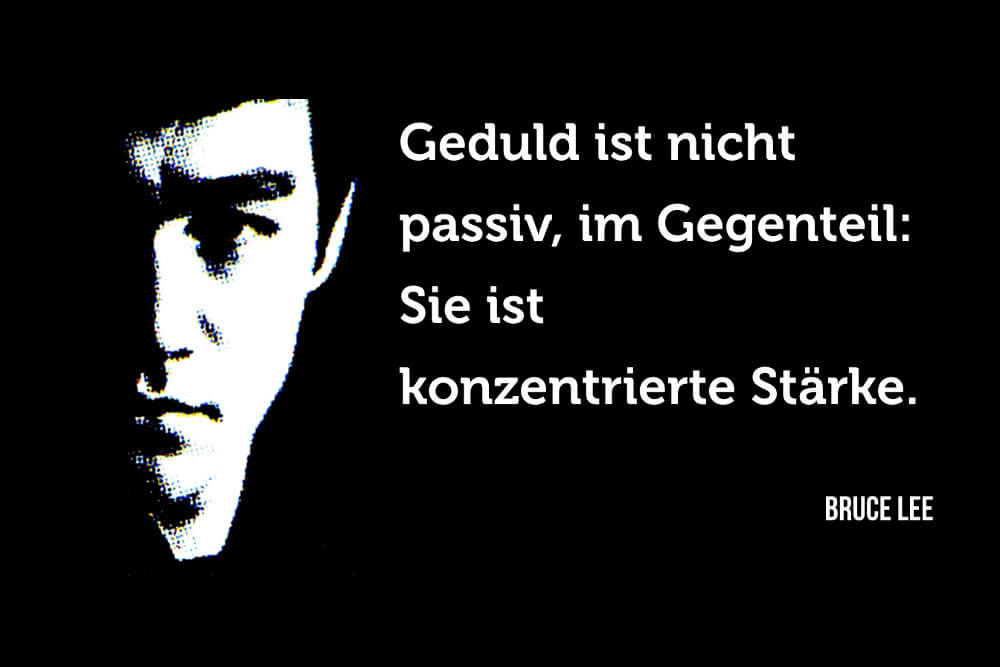 Bruce Lee: the actor, the legend

Bruce Lee was born in 1940 in San Francisco as “Lee Jun-fan” or “Lǐ Zhènfán” in Chinese. A little later, his family moved to Hong Kong, which was then occupied by Japan. The Japanese occupation shaped Bruce Lee from an early age. Lee's mother is said to have told about how he is said to have raised her fists at the Japanese fighter pilots when he was only five years old.

In general, Bruce Lee had a very combative nature as a child: Lee grew up in a wealthy and privileged environment. At school, however, he was teased by his classmates because of his small size and, in particular, his origins, and there were some brawls. In order to be able to defend himself, he finally began to learn martial arts techniques. His first teacher was his father Lee Hoi Chuen - a leading actor in Cantonese opera and regional films. His teacher later became the famous Yip Man, one of the most famous masters of Wing Chun Kung Fu. He trained him for five years. Lee learned Kung Fu, Taekwondo and later developed his own style: Jeet Kune Do.

Bruce Lee studied acting, psychology and philosophy at the University of Washington. His role in the series "The Green Hornet" was to be the beginning of a great film career that made him famous in the USA and eventually worldwide.

While filming "The Man with the Death Claw" Lee suffered a breakdown on the afternoon of May 10, 1973 and was taken to hospital with convulsions. After a thorough examination in Hong Kong and then in Los Angeles, the doctors diagnosed cerebral edema and an epileptic seizure. Bruce Lee eventually returned to the Hong Kong set with some medication to complete the film. But it turned out differently ...

After a busy day and after taking pain medication, Lee was again admitted to the Queen Elisabeth Hospital in Hong Kong, unconscious. All attempts at resuscitation failed. Bruce Lee died in 1973 at the age of only 32. Officially, from a swelling of the brain caused by an allergic reaction to the pain reliever. His death is still a mystery to this day.

Bruce Lee left behind a wife and two children (son Brandon Bruce Lee, also deceased in 1993, and daughter Shannon Emery Lee). When he was buried in the "Lake View Cemetery" in Seattle, his pallbearers included famous actors such as Steve McQueen and James Coburn. Many also make pilgrimages to his grave to this day. The legendary director Quentin Tarantino also created a monument to the actor in his film "Once Upon A Time In Hollywood". There the role of Bruce Lee took over the martial arts actor Mike Moh.

Bruce Lee wasn't just a crossover between martial arts and anti-colonialism. The "dragon" also developed numerous philosophical thoughts. Among them, for example, the famous request: “Be water, my friend!” The underlying idea: It is not hardness that wins, but the concept of water: softness, flexibility, adaptability, which play around the hard, soak up its strength and finally conquer it. There is also much else that can be learned from the exceptional talent. We have therefore selected nine quotes from Bruce Lee that reflect his understanding of success and from which you can gain insights for your own implementation:

Challenge yourself again and again

There are no borders. There are steep mountains, but these have to be overcome. A man must regularly outgrow himself.

Anyone facing a major challenge is initially overwhelmed. The hurdles seem insurmountable. But instead of throwing in the towel, go step by step. Challenge yourself to always go a little further, to climb the next level. ➠ More about this: Learning phases: learning from plateau to plateau

See failure as a step to success

An idea didn't work, a project went wrong, self-employment didn't work - anyone who fails feels like a failure. Many people mistakenly feel ashamed of their failure. Bruce Lee believes this is completely wrong. If you take a risk, you run the risk of failure. Many people let their fear of failure deter them from even trying to turn their ideas and plans into action. “I would like to write a book”, “I would like to start a business” and the end of the song is “But what if it doesn't work out?” You took this risk and it takes a lot of courage. Instead of blaming yourself, you can be proud of your courage. ➠ More on this: Overcoming defeats: Using failures

It not only takes 10,000 kicks, but, according to US psychologist Anders Ericsson, 10,000 hours of diligence, hard work and discipline to become world class in one thing. He called this not entirely undisputed finding the “10,000 hour rule”. ➠ More about this: 10,000-hour rule: Is practice a master?

Better slow and right than fast and wrong.

We live in a world where everything should happen “now” and “immediately”. Nobody has any more time, everything happens in a hectic and stressful manner. As a result, things are done hastily and prematurely, making mistakes. Stick to the words of Bruce Lee or stick to a well-known German proverb: Good things take time. ➠ Read more: Patience: How to Benefit from Virtue

Know your strengths and weaknesses

The basis for self-confidence is to know your strengths and to have a positive self-image. Having confidence means being aware of yourself. Bruce Lee has lived this himself again and again. The foundation for this are three questions: Who am I? What can I? What am i worth Those who know their strengths and weaknesses find it easier not to take criticism personally and to be able to laugh at themselves. ➠ More about this: Self-awareness: Do you know who you really are?

If you are being criticized, then you have to do something right. Because you only attack whoever has the ball.

Criticism is not always pleasant. You feel attacked, treated unfairly and question yourself. The quote from Bruce Lee shows: Do not be too harsh with yourself. There is always someone you can't please who finds what you're doing wrong. Rather, attacks can also show that you are on the right track and that envious people have noticed you. ➠ More on this: Dealing with criticism: blame obliges

Live in the here and now

Life is there to be lived and not to be 'understood'.

The “what if” question can become an excruciating burden. What if I didn't get a rejection? What if I hadn't been fired? Thinking about the reasons for failure is a good way to learn from mistakes. But then you have to stop brooding about it, otherwise you won't find the courage to try something new. Those who cling too closely to past mistakes are missing out on opportunities. ➠ Read more: Mindfulness: definition, benefits, exercises

Don't put your light under a bushel

When you make a donkey of yourself, there is always someone ready to ride on you.

Those who make themselves small are treated accordingly by their boss and colleagues. Especially in the job there are always situations in which you have to confidently stand up for yourself. Bruce Lee did that - on set as well as building his martial arts schools. Because respect does not come easily to you, you have to work for it. ➠ More: Self-Marketing: Proper Self-Promotion!

In the classic sense, the term adaptability first of all describes people who are able to adapt to the new demands of their environment. The good news: flexibility, suppleness and improvisation are not supernatural gifts. Rather, they are based on behavioral patterns that everyone can train or develop. This requires the will and the courage to accept changes. So follow Bruce Lee's invitation: “Be water, my friend!” ➠ Read more: Learning to improvise: The key to success

Anyone who wants to take Bruce Lee's courage and discipline as a role model - be it in training a sport or in a professional career - should take a look at his wisdom every day in order to internalize it. That is why we have summarized them for you here in a PDF file: free to download, print out and hang up.

That's why Bruce Lee is a good role model

In addition to the quotes and lessons, there are other reasons why Bruce Lee is a good role model: On his way to success, he has proven time and again what it takes to make it to the top. As a martial artist and actor you need a lot of resilience and motivation anyway, but you should not only orientate yourself on your successful career with well-known films. To conclude, we therefore provide you with four things that you should learn from Bruce Lee's life: