How many DMs do I have

"DM to collab": This is how dropshippers cash in on Wannabe influencers on Instagram

In influencer marketing, influencers should normally generate attention for the advertiser and, as a result, purchases from their followers. But some savvy digital businessmen are now turning the tables: They let the “influencers” buy the products (at a “discount”) after they had previously promised them - in automated and massively posted comments - actually free goods. The "influencers" thus become the real customers. OMR shows examples and explains the method and the underlying mechanisms.

“Absolutely stunning! We'd love to send you jewelry for features! Please write us a message and become one of our aspiring brand ambassadors! ”-“ I was looking for someone like you! Let me send you free jewelry for a collab! ”-“ What a lovely post! We would love to work with you and send you pieces of jewelry as gifts for features! Send us a DM. " 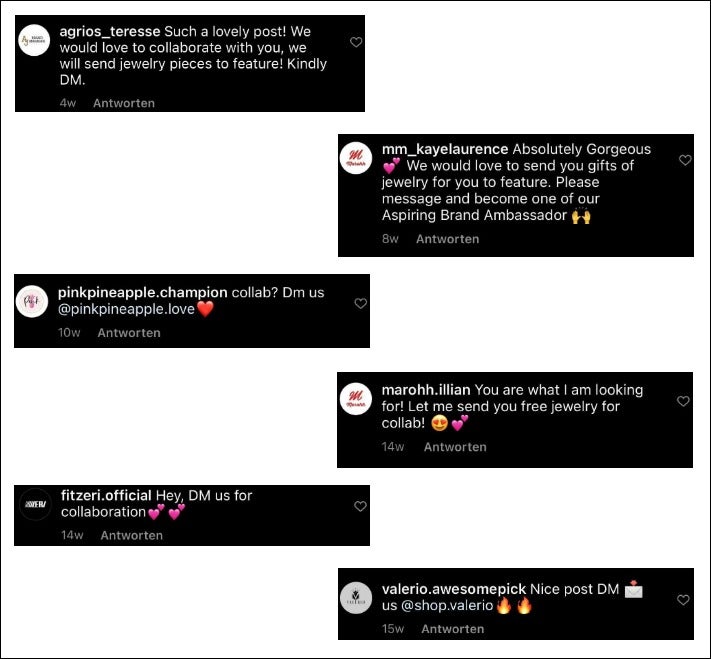 "I'm being harassed by a fashion brand on Instagram"

These comments we quoted (and translated) were made under posts on the Instagram account of our OMR sales colleague Hannah Speidel. Hannah is by no means the only one who receives such comments. If you search for “dm to collab” or “instagram collab scam” on Google or other digital platforms such as Twitter or Youtube, various blog entries, videos and social posts can be found that give an impression of the extent of this phenomenon Has. Apparently it has become everyday on Instagram in the past twelve to 24 months that “Otto and Ute normal users” receive such invitations to “Collabs” (short for Collaborations).

Zulie Rane, editor at OneZero, the tech blog of the US platform Medium, recently tested what happens if you accept such an invitation and write to the relevant accounts about a "collaboration". "I found out that these brands are fake from cover to cover," Rane writes. You have neither been able to enter into a paid partnership, nor have you received the free product samples that are often promised in comments.

20 percent discount instead of free products 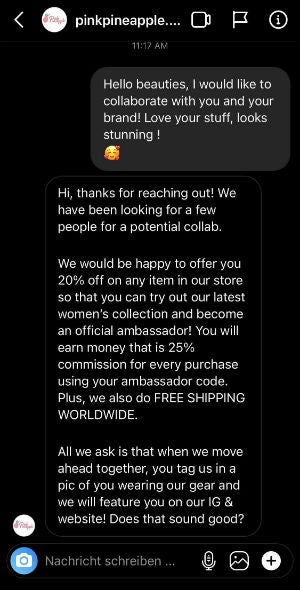 Instead, the respective brands offered her a discount code with which she could purchase the items in their online shop at a 20 to 50 percent discount. In addition, they can pass on a personalized discount code to their followers and receive a commission of 30 percent each time they make a purchase using this code.

Hannah got a very similar answer when we asked her to write to the fashion and jewelry "brand" Pink Pineapple about a collaboration, as previously promised in a comment: 20 percent discount on your own purchase, 25 percent commission when buying followers. From other suppliers, such as the fashion jewelry brand Marohh, you can read in online forums that they are offering the “brand ambassadors-in-spe” free pieces of jewelry and that they only have to pay the shipping fees, which are probably the purchase price of the articles Far exceed.

The impression that the “DM to collab” spammers grant at least some generous discounts is put into perspective as soon as it becomes clear where the majority of the goods offered in the shops come from, what they cost to buy and how much the shop -Operators in sales ask for it. Several YouTube channel operators have dealt with the phenomenon of "collab scams" and have repeatedly come across examples of products that shop operators on Chinese marketplaces buy at ridiculous prices and then sell for ten to 22 times to be resold. Even with a discount, the bottom line should be a respectable profit for the online shop operator with every purchase made by an “influencer”.

Are mostly dropshipping adventurers behind it?

Presumably, many “native Instagram brands” also sell the goods in their online shops according to the dropshipping principle: only after a customer has ordered from them do they themselves order the respective item on a Chinese marketplace and give the address of their customer Customers as the delivery address. This means that the goods do not have to run through their own hands and the shop operators save storage and other logistics costs.

We had already dealt with the dropshipping hype at the beginning of 2018; In May 2020, Wired published a portrait of the adventurer scene that had arisen around dropshipping, including the “digital nomad” existence in Bali and their “rough awakening” in the corona crisis: “In Bali, western immigrants are selling products they've never handled, from countries they've never visited, to consumers they've never met. "

With all those dropshippers who use the “fake collab comment spam” method, the supposed “influencers” are primarily the real customers. But through the posts that all those users produce because they feel flattered in their vanity, speculate on free product samples or try to start an influencer career with such "collaborations", they still find content that is for them Marketing can use as well as additional reach.

We reported on a very similar strategy a year and a half ago. Back then, young Instagram brands (including German) advertised organically and with paid Instagram story ads for “micro influencers”. As it turned out in the further course of the communication, they then had to pay for the products for which they were supposed to advertise.

In the case of “DM to collab” spam, there is another component with which the respective traders can again advertise more actively and aggressively for brand ambassadors / buyers: a method that “mother-child” in the growth hacking scene or also called "mother slave". This consists of a “mother account”, ie the main brand and online shop account. In order to stimulate its growth, the growth hackers set up a large number of “child” or “slave accounts”, which massively advertise “collabs” to other users. This is usually done automatically using bot software. The Jarvee tool is apparently particularly popular for this at the moment. But there are apparently also specialized “mother-child” tools. 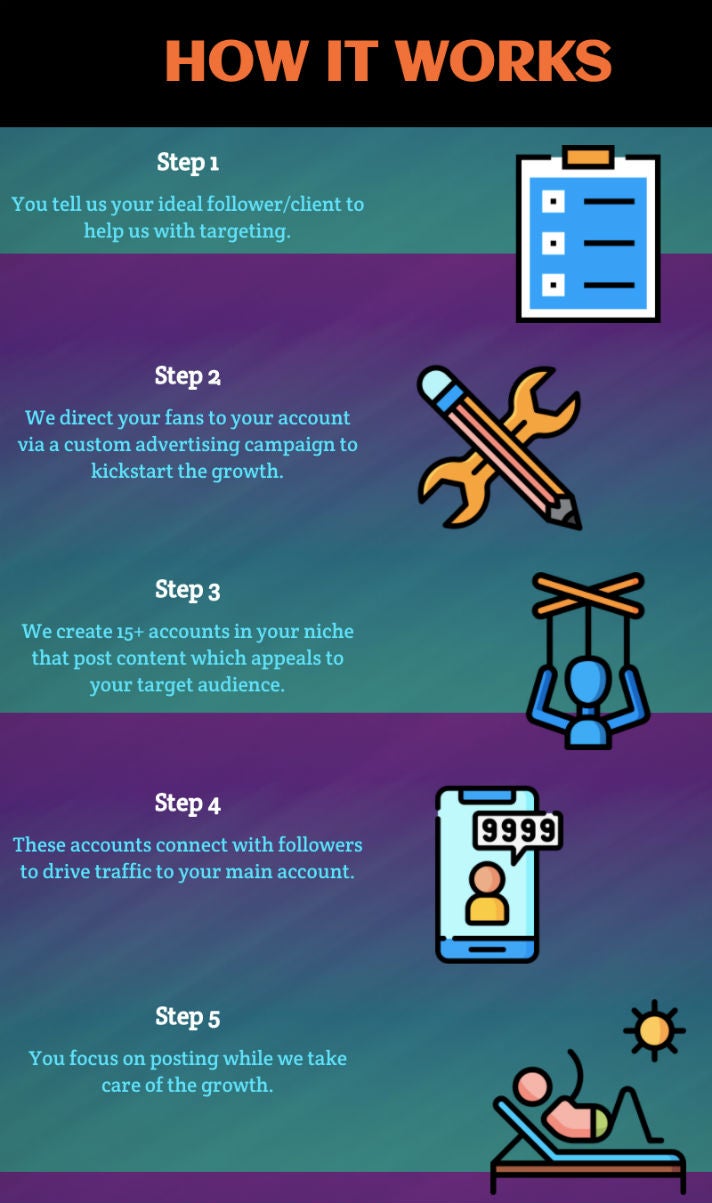 A provider of a "mother-slave method" software explains how the method works (screenshot: motherslavemethod.com)

On the one hand, the “mother-child method” creates a kind of “social proof” effect. The "child accounts" are likely to act like existing brand ambassadors to inexperienced users and perhaps even increase the desire for such a "membership". On the other hand, and this is likely to be the more serious advantage of this method, you can use masses of fake accounts to advertise the main account to other Instagram users without risking them being blocked. After all, Facebook has been taking very rigorous action against the use of bots and spam for a number of years.

One account is blocked, ten new ones pop up

What was originally intended as a means of building coverage on Instagram (with comments like "Follow account XY, you might like it") is now being used by the "DM to collab" spammers as a sales driver by using the method with fake collab Link offers. Apparently some of them have a two- or three-digit number of sub-accounts that advertise new "ambassadors" via comment or direct message.

If one of the accounts is blocked after user complaints, you can simply set up ten new ones. Because the "growth hackers" do not spam via their main account, but mostly use the "bio" of the child accounts, it is apparently very difficult for Instagram to prevent this method.

There are entire networks of “Dm to Collab” spam brands

How big the phenomenon has become is not only shown by corresponding tweets and other social posts. Lists can also be found on the Internet that were created by influencers and Instagram users and on which brands and accounts are documented that offer fake collaborations or rip off influencers in other ways.

Some “DM to collab” spammers also seem to operate a whole network of brands. The fashion and jewelry “brand” Pink Pineapple that we wrote to, for example, seems to belong to such a network. In the online shop and on the brand's Instagram account, no information about the identity of the operator can be found. However, Apple names the company Lasting Impact LLC as the operator of the “Pink Pineapple” shopping app. On its website, the founders indicate which brands belong to their “empire”. In addition to “Pink Pineapple”, these include “Brute Impact” (urban lifestyle fashion, 231,000 Instagram followers), “Valerio” (watches and sunglasses, 147,000 followers) and “Urbanice” (fashion jewelry set with fake gemstones, 120,000 followers).

"Those who know their value do not give discounts"

The "Lasting Impact Holding" was apparently founded by two brothers from the USA. One of the two documents his “digital nomad” lifestyle on his Instagram account, including “Hustle like you are on your last dollar” slogans, sports car photos and of course photos of sunsets and coworking spaces in Bali and Thailand. The most amusing post with knowledge of his company's methods: a visual statement with the inscription: “Lamborghinis are never on sale. Do you know why? Because the day you realize your own worth, you stop giving people discounts. "