What do I mean in the book 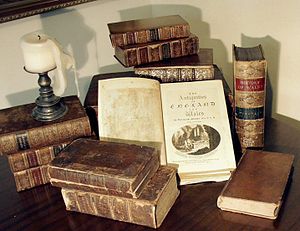 Some old books with thick covers

A book consists of different numbers of printed pages. They show texts or pictures and are mostly made of paper. Usually a book also has a cover that protects the pages so they don't crease or get dirty. Most of the books today differ according to their content: there are stories, dictionaries, school books, special books for professionals and many other types.

A book needs an author to write the text. Sometimes there are also pictures that are painted or photographed. The graphic artist designs the book cover. In the print shop many pages are made from the individual pages. In the bookbindery, the sheets are finally put together into whole books and packed for sale. The books are sold in a shop, for example a bookstore. The collaboration between the author, graphic designer, photographer, printer and bookstore is organized by a publisher.

In the past, books were copied by hand. Often this was done by monks in a monastery. It was very laborious and only a few books could be produced. In the Middle Ages, in 1440, Johannes Gutenberg invented letterpress printing. Even if fewer people were able to read back then: From then on, books were produced faster and cheaper and suddenly there were a lot more of them. Today everyone learns to read and books are available for little money.

What was there before the first books? 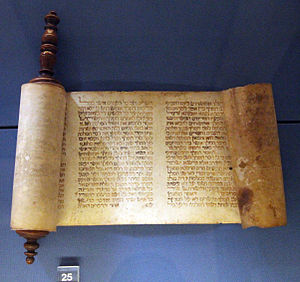 This scroll is composed of pieces of parchment. A part of the Old Testament is written on it.

Initially, people wrote on wood or on clay tablets and even chiseled important texts in stone, as we know from tombstones. In the Orient, people also wrote on papyrus made from a plant. Since this plant does not grow in our country, thin leather was used, which was called "parchment".

Parchment is the skin of animals, such as cows or sheep, from which the hair has been removed. So it's a thin leather. Parchment lasts a long time, but was always very expensive.

Several sheets of paper were needed for longer texts. Usually they are glued together into a long strip and rolled up. That made a scroll. You had to roll them apart to read the content. The Egyptians used such scrolls 5000 years ago.

The actual book was invented in the 5th century AD: Pieces of equal size were cut from papyrus or parchment and then placed on top of one another. Something like that was called "Codex".

In the Middle Ages, paper was invented in Europe as well as in China. It is still made today from wood or from waste paper. Paper quickly replaced papyrus and parchment because it was cheaper.

What kind of books are there? 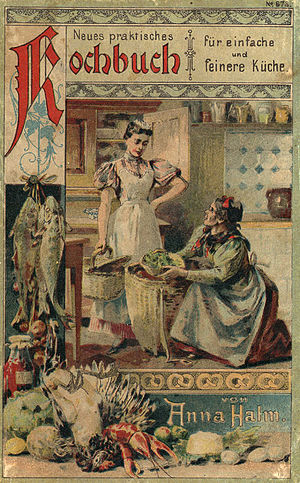 A “New Practical Cookbook” from 1900. The colorful title page is intended to arouse curiosity among buyers. Today such a front page is often called a “cover”, pronounced kawwa.

There are many ways in which books can be grouped. A bound book is usually more expensive and heavier than a paperback, i.e. pehpa-bäck. The paperback or paperback is simply glued together. Since around the year 2000, electronic books have also been sold, so-called “ebooks”, i.e. ih-bucks.

Often books are classified according to who should read them. Picture books usually have thicker pages and many pictures with little text. They are read to young children. Children's books shouldn't be too difficult and should be about something that children love to read about. Youth literature is intended for readers aged around 12 or 14 when they hit puberty.

Some books are considered simple because they tell stories that one has often read in one way or another. Other books are called "high literature". It is about important things, about feelings and the way you deal with other people.

Non-fiction books don't tell a story, but explain something from a field of knowledge: for example about astronomy, animals or other countries. Such non-fiction books are available for adults, but also for children and young people. Textbooks, on the other hand, are there for scientists who are already very knowledgeable.

What does a book look like from the inside?

A book is not just a text from beginning to end. In most books, the content is divided, mostly into chapters. A chapter has several or dozen pages and starts with a large heading.

You read a novel or other story from cover to cover. Other books are there so that you can look up something quickly, for example an encyclopedia. You can often find a table of contents at the front of the book. This is a list of the chapters in the book. There are also page numbers so that you can immediately turn to the page on which a certain chapter begins.