Ammonia is a liquid

Base ammonia (NH3) is a colorless gas with a typical and pungent odor that can be obtained from nitrogen and hydrogen. It is miscible with water and is often used in the form of aqueous solutions. The gas and its solutions are rarely used medically today. But they play an important role in the production of ammonium salts, for chemical syntheses and as cleaning agents. When dispensing, it must be noted that ammonia solutions can be misused for various purposes.

Ammonia (NH3) is a colorless gas with a typical, pungent and unpleasant odor, which is composed of nitrogen (N.2) and hydrogen (H2) can be obtained. In the laboratory, it can be made with an ammonium salt and sodium hydroxide:

Ammonia can be mixed with water. The concentrated ammonia solution contains between 25% and 30% percent ammonia. It is available as a clear, colorless and strongly corrosive liquid with a pH value of 13 and is miscible with water. It should be stored at a maximum of 20 ° C and not together with acids. In the Pharmacopoeia Helvetica, the ammonia solution 10% PH is also monographed. The → amines are formally derived from ammonia. 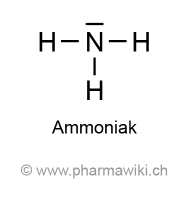 Ammonia is basic. For example, it reacts with acids, producing ammonium salts, for example ammonium chloride when reacting with hydrochloric acid:

Together with nitric acid, ammonium nitrate (NH4NO3). NH4+ is called the ammonium ion.

Ammonia and its solutions are rarely used medicinally today. In the past, the preparations were used, among other things, for the local treatment of insect bites, as a liniment and as a fragrance for fainting.

Ammonia is used for chemical syntheses, as a reagent, solvent and in pharmacy for the production of active ingredient salts such as ammonium chloride or ammonium bituminosulfonate.

Diluted solutions are often used as cleaning agents, for example for glass, porcelain or metals.

Ammonia can be used for the production of the cocaine base (freebase). This is the deprotonated and smokable form of cocaine. Ammonia is also used as a chemical in the illegal manufacture of intoxicants such as methamphetamine.

At the 2018 World Cup, some Russian players inhaled ammonia as a performance-enhancing agent shortly before they were used.

If ammonia solution is added to elementary iodine crystals, the labile and highly explosive iodine nitrogen (NI3). Dry iodine nitrogen explodes with a loud bang when touched lightly, which can damage hearing and lead to injury.

Conflicts of Interest: None / Independent. The author has no relationships with the manufacturers and is not involved in the sale of the products mentioned.

Support PharmaWiki with a donation!

© PharmaWiki 2007-2021 - PharmaWiki provides independent and reliable information about medication and health.
This article was last changed on February 16, 2021.
Imprint and data protection declaration
Show products for this page
<?