Will humanity live with robots

Artificial intelligence
The human robot knocks on the door

International research networks are working on robots that not only resemble humans in their intellect, but also move and behave in this way. It will take some time before an artificial intelligence can meet us at eye level.

The Human Brain Project (HBP) was launched by the European Union in 2013 - with an ambitious goal: within the next ten years, they wanted to develop an Artificial Intelligence (AI) that achieves the computing power of an Exa-FLOPS. An Exa-FLOPS corresponds to a computing power of 10 to the power of 18 computing steps per second, i.e. a number that is greater than the number of stars in the Milky Way and the Andromeda Galaxy added together (FLOPS: Floating Point Operations per Second; Exa: a trillion, i.e. one One with 18 zeros or 10 to the power of 18). Everyone is born with a compact version of such a computer - the brain. So within ten years, the HBP wants to use AI to do what evolution took billions of years to do.

At the beginning of this major project, in which over a hundred research institutions and companies are involved, the establishment of an international research network stood. Neuroscientists, computer scientists and other specialists from different disciplines now exchange ideas with one another. Together they examine the human brain in greater detail than ever before - starting at the molecular level through to the connections that enable complex cognitive processes. Since this research also touches on ethical questions, philosophers are also on board.

In order for such a cooperation to work smoothly, the exchange within the knowledge community must improve. To date, there are no international standards for neurological research and the results are structured differently from one organization to another. This makes it difficult to capture the current state of research in a uniform model. The HBP should change that: Researchers from all over the world should be able to access the new knowledge that is generated during the project and use it for their own projects. To this end, the project aims to build an international platform that processes neuroscientific data in a standardized manner for everyone. The findings can then also be used for medical research, for example.

An AI to shake hands with

While the HBP in Geneva is on the trail of the structure of the brain, researchers in Munich are working on a robot that is supposed to imitate the human body in all its finesse. This robot by the name of Roboy is, so to speak, the face, arms and legs, ankle, swing of the hips and the opening of the eyes of the HBP.

The story of Roboy began in 2013 at the University of Zurich, where computer scientists, engineers and mechatronics technicians came together to develop a robot that - technically speaking - is in no way inferior to humans. The researchers came together from all over Europe and even included partners from other continents: For example, researchers from the University of Melbourne made a decisive contribution to the software that controls Roboy's motor skills with their knowledge of muscle control. In return, the Roboy team equips them with high-quality hardware for their own projects. 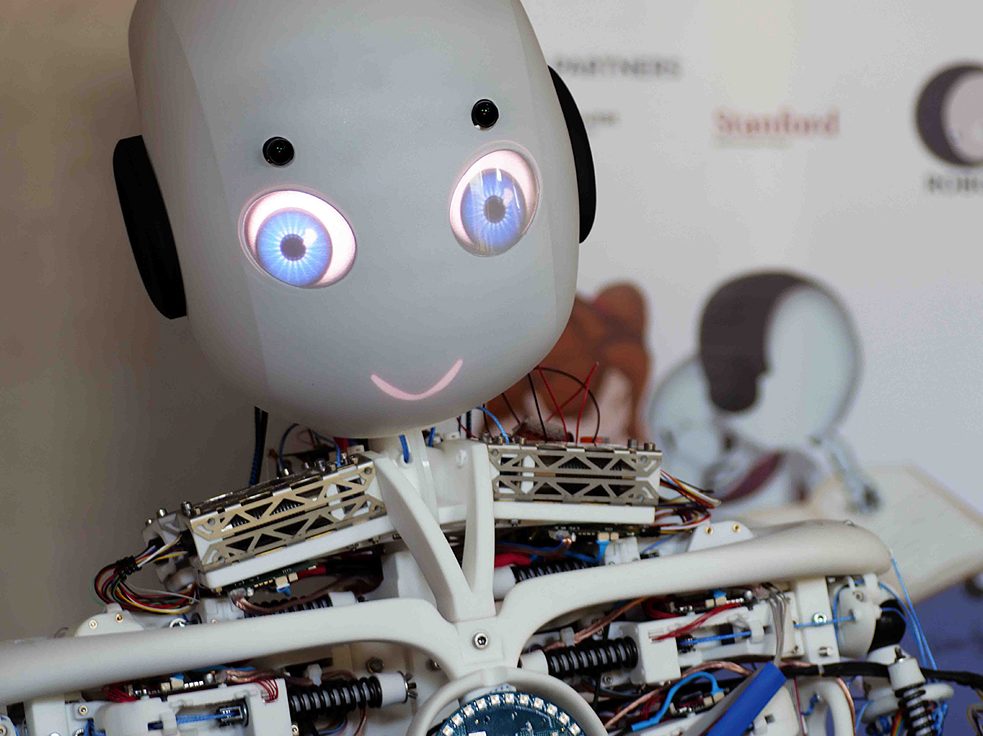 The robot Roboy can already cycle and operate a turntable. In 2020 he should even be able to make medical diagnoses. | Photo: © Roboy 2.0 - roboy.org The robot has now moved to the Technical University of Munich. Every semester there, a new team of students from different disciplines is busy teaching the Roboy something new. They instruct him, for example, to have a conversation with two people at the same time or to play the xylophone. They make all the knowledge gained freely available on a robotics platform on the Internet. From the mechanics of its feet to the circuit diagram that lets Roboy's eyes see: The complete anatomy of the robot is explained in the open source portal and is available for download, so that any layperson, researcher or tech geek can access and develop the technical knowledge can.

And the little robot is learning rapidly: Roboy can already ride a bike and operate a record player. In the future, he can look forward to a career as a waiter and carpenter - professions that require exceptional motor skills.

And 2023? By then, the HBP wants to achieve its goal and have developed a computer that is in no way inferior to the human brain. Until then, there are still a few hurdles to overcome. For example, many technical steps are necessary for the computing power of an Exa-FLOPS. To even begin to simulate the speed and storage capacity of the human brain, enormous amounts of energy are required. This requires development work in the area of ​​energy-efficient computing power, which could ultimately also revolutionize classic industry.

If these hurdles are to be overcome, however, the future of the Roboy is impressive: Merged with the Exa-FLOPS “brain” of the HBP, its capabilities would resemble a human being like no machine before. Of course, this raises fundamental ethical questions: An ethics committee has always been a close companion of the project - on the other hand, his charming eyes and the robot's motto: "be friendly" ensure that an encounter with Roboy is not perceived as threatening.