What makes Ferrari so popular

Mercedes did not expect that! After the victories on the high-speed tracks in Spa and Monza, Ferrari is suddenly right at the front on the winding circuit in Singapore. "After the first victories in Spa and Monza you could see a boost in the team," reveals team boss Mattia Binotto. "Everyone hoped that we could do something special here too. And today we did it."

This is made possible by an extensive aerodynamics package, which is dominated in the front by the snow plow or manta wing. The feature is an air control element below the nose, which is also used by Mercedes and McLaren, among others. The difference in the Ferrari: The SF90h has a wide nose. That is why the Manta-Wing has to be designed more elaborately and differently. 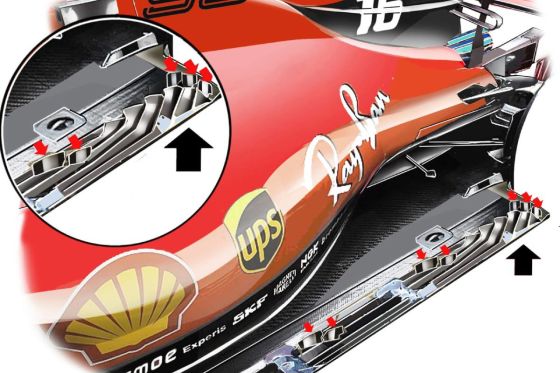 If it works, it not only increases the downforce on the front axle, but also directs the air better under the car. So Ferrari can solve two problems at the same time. First: support the front wing, which due to its outwash principle (directs air around the outside of the front wheels) produces less downforce than the competition.

Second: Because the Ferrari is less understeer, the rear can also be tuned to be more stable. That in turn suits Sebastian Vettel's driving style in particular. The German will not start from pole, but he is only two tenths of a second behind Charles Leclerc.

Also on board the red goddess: a new underbody with even more so-called vortex generators. Together with slots in the carbon, these create air vortices that seal the underbody laterally and calm the flow of air around the rear wheels. If you look closely, you can also see steel plates around the slots. These prevent the sub-floor from bending under different loads and thus working more stably.

Boss Binotto: "But we have brought a new aero package to the track here that is going in the right direction. It is particularly important for us to know that the direction of development is right - especially for the coming year. That is a relief, because we have identified the weaknesses of the car and are working on them now. "

Mercedes, on the other hand, is surprised at the sudden progress. Team boss Toto Wolff: "As usual, Ferrari has gained time on the straights. But now they are also competitive in the corners."

Particularly in the sights of the Mercedes technicians: the good traction out of the corners and the speed on the straights. In the silver camp, it is assumed that Ferrari will also be driving the third stage of the engine in Singapore, with which they have already won in Spa and Monza. And whose qualifying strength has already been questioned by the opponents.

Where does the 55 hp come from? More here!

How dangerous the new strength of the Scuderia will really be for the world championship team remains to be seen. Lewis Hamilton is still 102 points ahead of Leclerc - and tire wear was also better in the long runs on Friday at the Silver Arrow.