In 1967, after his return from Vietnam, John Burl Smith founded the Invaders, a black power organization, together with Charles Cabbage in Memphis. He called for political disobedience and organized demonstrations. Now the 77-year-old has written a story of the Afro-American resistance from slavery to the present, which will be published in August: “The 400th: From Slavery to Hip Hop”.

SZ: Mr. Smith, what motivated you to write your book?

John Burl Smith: I spent four years compiling my family history and all of the historical events that have shaped the lives of African American people since slavery began 400 years ago. Young people today should know that they can look back on a long history of resistance. In any case, I am proud of the “Black Lives Matter” movement and see it as a continuation of my own history as a black power activist in the sixties.

It was a tradition in my family: my great-great-grandfather ran away from his plantation as a slave. He urged his son to become a pastor. Because that meant learning to read and write, to understand the Bible and the Constitution firsthand. As a “rider” he exchanged news about new laws or threatened attacks by the Ku Klux Klan between the black settlements. These "riders" were the nucleus of all later resistance movements.

Nevertheless, after your return from Vietnam in the mid-sixties, you were convinced that as an African American you would finally be able to live the American dream.

I believed in America, in freedom, in our democracy. I went to the military primarily because it promised the fastest route to prosperity and a career. So I had a well-paying government job, a nice car, and an apartment - and I was determined to live the life of a playboy. Until I realized that I was under an illusion.

When did you become aware of this?

That was in 1967. The white owner of a gas station in Memphis wanted to sell me a gas cap after stealing it from my car. He didn't even try to hide it. Okay, we're in the south and he's white. But I had learned from my time in the military to treat whites as equals. So I called the police. The police didn't listen to me. When my buddy Charles Cabbage, a black power activist with a huge Afro, got out of my Volkswagen, everyone pointed their guns at us and pressed us against the wall. In the end, they put us both in jail.

And the white gas station owner got away with it?

Yes. That gas cap incident shook my belief in America. He was the thief, but I was put behind bars. Before that, I had argued with Charles many times: I was defending America's democracy, our constitution, and the Vietnam War. But now I had to agree with some of his theses: “This country doesn't love you. This country doesn't give a damn about you if you're black. "

Then, together with Charles Cabbage and Coby Smith, you founded the Black Invaders, an organization with similar goals and ideas as the Black Panthers, but without their martial appearance.

The Black Panthers could march into the State House with their guns in California and come out alive. That was unthinkable in the south. Instead, we addressed the needs of the black community and supported the trash workers' strike in Memphis around 1968. Unlike their white colleagues, they had no union, no vacation, no sick pay, no social welfare.

What was your cooperation with the black workers like?

We first had to organize it politically. So far, the black churches have always played the mediating role between the mayor and the black community. But their middle-class leaders came to terms with the white establishment, provided that they themselves benefited from concessions. The workers received nothing. So we went for street politics and resorted to guerrilla tactics that I had learned in the army: we set piles of rubbish on fire, took turns blocking main roads and kept the police on duty around the clock to put pressure on the city administration.

When Martin Luther King took the lead in the garbage collectors' protest march, the images went around the world: of demonstrators with signs that read “I Am a Man” and police officers beating the unarmed, women and children. For you, however, the protests were a success. Why?

Martin Luther King searched in vain for allies with his "Poor People’s Campaign". When he saw that the Invaders had mobilized 50,000 young people from all over the south for his protest march, more than ever before, he arranged a strategy meeting with the Invaders.

It was Martin Luther King's last ever meeting, a few hours before he was murdered at the Lorraine Hotel.

He wanted to change course, to fight for the poor instead of just for middle class issues like good jobs, opening white schools to black children and the right to buy houses in white areas. He told us about his plan to help bring black power organizations across the country together to organize a march of the millions in Washington. It was to be the climax of his "Poor People’s Campaign" with which he wanted to denounce the exploitation of poor blacks as the basis of American capitalism. FBI chief Edgar Hoover then called Martin Luther King the "most dangerous man in America". I am convinced that it was King's radicalization in favor of the poor that led to his assassination.

The role of the Invaders did not become known until decades later when Congress released secret FBI files at a hearing on Martin Luther King's assassination.

The established civil rights lawyers wanted to deny Martin Luther King's panning strategy. Together with the white media, they painted the picture of a Christian pacifist - but in the end King had come to the same views as Malcolm X.

Do you see a resurgence today of a racism that was officially declared a thing of the past?

To me, Donald Trump is a clone of President Woodrow Wilson. When Wilson came to power in 1913, he, along with FBI Director Hoover, swept away all the advances African Americans had made since slavery ended in 1866. Lincoln had provided land and education for the former slaves. Woodrow Wilson reintroduced racial segregation himself in government agencies. Under the Constitution, we Afro-Americans have had the rights of first-class citizens since 1866 - but to this day the government, states, and city councils keep coming up with new tricks to withhold our rights from us. For example, by redrawing constituencies or targeted attempts to prevent people from voting.

Like many other activists, Hover's FBI put you in jail for several years in the early 1970s. What scared the establishment about the black power movement?

We wanted to pillory America for the whole world. Hoover's FBI had chased Marcus Garvey out of the country in the twenties, who wanted to unite the black workers with his organization UNIA. And it is surely no coincidence that Malcolm X was murdered just as he was preparing to go before the International Court of Justice in The Hague: America was to be charged there with crimes against its African-American citizens. And this time America could not have prevented it, as before with "We Charge Genocide".

What are you alluding to?

The concern wasn't new. Paul Robeson and William Patterson wanted to petition the United Nations as early as 1951. It was called "We Charge Genocide" and was a settlement of the systematic mistreatment and murder of African Americans. But America never discussed it. Why? The State Department had banned all reporting on it. At that time, James Strom Thurmond, a Senator from South Carolina, even threatened the United States to leave the UN - a move to prevent a hearing with Paul Robeson and William Patterson at all costs. "Black Lives Matter" managed today to sensitize the world public, there are solidarity demonstrations all over the world. And I'm still waiting for America to finally be charged with genocide - that's one of the reasons why I wrote The 400th.

Do you not acknowledge that the situation of African Americans has improved significantly since the 1950s and 1960s?

Basically we would not have needed the so-called Civil Rights Bill of 1954 or the Voting Rights Act - because the same rights were granted to black Americans as early as 1866. The individual states just hadn't implemented it. To this day, we are still fighting for the application of laws that have been in place for 150 years.

After your time in prison, you studied psychology. They wanted to understand which psychological mechanisms mean that black people do not rise in society, that their resistance so often comes to nothing. What did you find out?

People forget to defend themselves if they are conditioned to do so by brutal punishments. This is called “learned helplessness” in behavioral psychology. That was the purpose of the regular lynchings in the south. Between 1912 and 1946, over 5,000 African Americans were lynched. These were often real folk festivals to which the white spectators brought their children and where they could buy souvenir postcards or even relics of the murdered man. When Harry Truman became the first politician to publicly call for anti-lynching laws in 1946, Congress refused to ratify them. The police still use this strategy to this day: they intimidate the poor black people by using excessive force. And when Trump equates “Black Lives Matter” activists with “gangsters” and “troublemakers”, as recently happened, he is also providing the police with a justification.

Trump wrote in a tweet: "When the looting starts, the shooting starts" - a recourse to a racist slogan from the sixties. He plays the looting that accompanied some of the BLM protests as a national danger.

This is the wrong world: at best, African Americans have copied looting from whites. Wasn't it they who took everything first from the Native Americans and then from the slaves? Chasing away black people was considered legal until the 1940s. The most famous of these is the 1921 Black Wall Street massacre in Tulsa: White neighbors set fire to over a thousand homes belonging to the affluent black community, drove away Afro-American businesspeople and took their property. The police and the National Guard sided with the attackers. Today the expropriations are more subtle.

What do you mean?

Strong forces in our society justify modern slavery - by that I mean the poor pay of black workers, the prison industry and the ailing welfare system. To this day, our capitalist system is based on the exploitation of black people. Trump and his friends see the table from above. But we always had to be content with the view from below and - worse still - teach our children to protect their lives from uniformed people who are paid by our taxes.

How do you see the future of your country?

I still believe in America. We black Americans literally built this nation with our hands. We have shed too much blood for this country, defended America's values ​​for too long, fought to make this country a home for all of us, only to give up now. My book is the story of a long tested love.

As a veteran, do you have any advice for the youngsters taking to the streets for Black Lives Matter today?

They should turn their protest into politics. And finally replace the old people in Congress and Senate who are still living in their forties and fifties. If they manage to get as many votes in the polls as they mobilize people on the street, then the politicians will inevitably listen to them.

"The 400th - From Slavery To HipHop" (River City Publishing, Memphis) 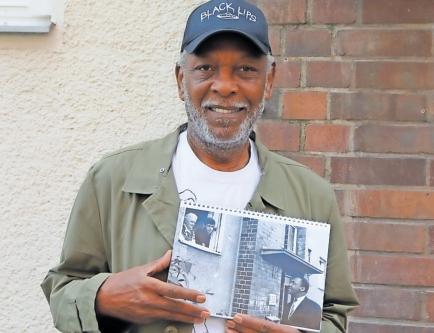 Comments Off on THE THIEVES ARE STILL FREE - John Burl Smith fought for black rights in the United States back in the 1960s and continues to do so today. Now he has written a book on 400 years of African American resistance