What does Elon Musk think of Stratolaunch

Will Stratolaunch lead us to black ice?

The company “Stratolaunch” has been developing an airplane with enormous dimensions for a while. The sponsor for the project and owner of the company is Paul Allen, who once founded Microsoft together with Bill Gates and subsequently became one of the richest people on this planet. The "Stratolaunch" (the machine is called like the company) is a flying launch pad designed to bring an orbital launch vehicle to a launch altitude of around 10,000 meters and to launch it from there. Advantages of the system: No launch delays due to weather, the carrier can head for any inclination, only needs a small launch infrastructure on the ground, and a spacecraft that takes off from the Stratolaunch carrier has an (albeit not particularly great) initial advantage in terms of launch altitude and Start speed with. On a generous basis, this aircraft thus forms the first stage of the launcher. The giant shoulder-wing wing has two fuselages, 28 wheels, six engines in the class used by the Boeing 747, for example, and a wingspan of 118 meters. The device weighs 540 tons when fully loaded and can carry 230 tons of payload. This cargo is hung on the wing between the two fuselages. The Stratolaunch requires a runway of 3,700 meters in length and has a range of 2,200 kilometers. The hangar in which this machine is built is so large that a special permit was required for the scaffolding.

Paul Allen originally planned to use this aircraft to launch a medium-weight SpaceX launcher called the “Falcon 5”. Elon Musk soon dropped out of the project because he didn't want to get bogged down with too many different types of missiles. Then there was a short interlude with a "Pegasus II" solid carrier from Orbital / ATK, before this project was also shelved. About three years ago we heard of a plan to launch up to three small carriers of the type “Pegasus XL” at the same time with the “Stratolaunch”, also a product from Orbital / ATK. The disadvantage of the project: The “Pegasus XL” is indeed a small carrier, but it is notoriously complex and sensitive, very expensive for its small size and is only rarely used for these reasons. It comes about once every two years. In the end, the Stratolaunch planners did not really understand where the need to start three of these carriers in a single operation suddenly came from, and so it was abandoned again.

Despite the fact that no suitable payload could be found for the giant bird, Stratolaunch continued to develop and build the machine relatively quickly. And the space fans scratched their heads helplessly and asked themselves: What on earth is Paul Allen going to do with this giant?

Rumors spread that the billionaire was developing the aircraft on behalf of the US military and that secret payloads could be launched with it. A story that wasn't really convincing, because keeping flights with this Behemot a secret is hardly feasible these days. Some wanted to know that the Stratolaunch was being discussed as a carrier for transporting bulky payloads to remote areas of the world. In doing so, they deliberately ignored the fact that this monster cannot take off and land on very many runways around the world, and certainly not in areas with undeveloped infrastructure. The assumption that the machine would simply be manufactured as an exotic one-off piece that Paul Allen intends to incorporate into his famous aircraft collection after completion has also made the rounds. The Stratolaunch as a pattern without a purpose, but with a lot of ideal value.

But recently the lid of the secret lifted a little. Possibly. The secret is called “Black Ice”. It is said to be an aircraft the size of the former shuttle orbiter, weighing 230 tons, which, if launched from the Stratolaunch platform, could fly “single-stage to orbit” into orbit. Without gradation processes and thus an absolute high-performance device. Black Ice is said to be able to maneuver independently in orbit for about three days. But it should also be able to control the international space station (or generally any space station in earth orbit). The first indications that Stratolaunch is also at work with regard to rocket technology only became public a year ago when the company hired its own director for space propulsion.

Incidentally, “Black Ice” is a very interesting name for the project. On the one hand, there is no “ice” in Mojave, California, where the device is (presumably) built, and secondly, “Black Ice” means “black ice”, but also an invisible, surprising layer of “black ice” on the streets. In addition to a good dash of irony, there may also be a hidden hint in the project name.

Otherwise everything that concerns “Black Ice” is currently in the subjunctive. The semi-official and informal statements currently available on the subject could be interpreted as if Stratolaunch only wanted to start developing Black Ice after the aircraft giant has completed its maiden flight. That could take place towards the end of this year. The giant aircraft is currently being attempted to taxi, but only on weekends when Mojave Airport is closed to normal air traffic.

However, starting with the development of a complex spacecraft only when the carrier vehicle is ready for use makes no sense at all in view of the long development times in the space business. Even if the Black Ice concept had secretly reached the Critical Design Review, it would still be years before a prototype was ready to fly. And what use would it then have to have the gigantic carrier aircraft ready for action, only to immediately mothball it again for many years? 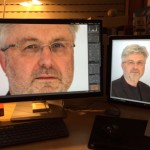 I've been a space fanatic since I was a child. My key experience was in 1963. I was in bed with measles. And there was a program on TV about Scott Carpenter's Mercury space flight. On this the comment by Wolf Mittler, the ancestor of TV space travel reporting. Today I work as a "breadwinner" at Airbus Safran Launchers in Munich in the field of carrier and satellite drives at an interface between business and technology. I also write for print and online media and above all for my own portal, "Der Orion", which I run together with my friends Maria Pflug-Hofmayr and Monika Fischer. I appear on radio and television, and am the author and co-editor of the space travel yearbook of the Association for the Promotion of Space Travel (VFR), which has been published since 2003. "Intercontinental Missile" was recently published by Motorbuch-Verlag. In the meantime I have published a total of 16 books with this publisher, three of which are now also published in the USA. In addition, I give lectures about 15-20 times a year at various institutions at home and abroad. My leitmotif comes from Antoine de Saint Exupery: If you want to build a ship, don't drum up people to get wood, distribute tools and assign work, but teach them to long for the vast, infinite sea. In this sense: Ad Astra

Stay up to date with the free Spektrum.de newsletter - five times a week from Tuesday to Saturday!
<?