What is the importance of conductor insulation

An audio cable consists of three elements or components: The ladder, the insulation material (more precisely the dielectric) - and of course the Plugsthat enable the connection to the equipment / loudspeaker.

The conductors of a cable are usually made of copper or - more rarely - silver. Silver has a light higher conductance As copper, the use of this expensive material can be useful not only for this reason: In terms of permanent, undisturbed signal transfer, another advantage is that silver oxide - in contrast to copper oxide - also has a high conductivity. The ravages of time therefore give rise to the “electrically better decay product” in silver.

The conductance of a substance is nothing different than that Reciprocal of its resistance:

and is measured in the Siemens unit. A substance with a low specific resistance therefore has a high conductance.

The resistance that a substance opposes the current flow results from its specific atomic structure. The more likely it is that the flow of free charge carriers will collide with atoms of the material, the higher its electrical resistance. Metals have one crystalline structure on and free electrons can move through this crystal lattice like a "gas cloud". This is not possible with materials with a rather irregular atomic structure (e.g. ceramics, glass), which is why they are insulators.

At a given temperature, length and cross-section of the conductor, the resistance (and thus the conductivity) theoretically only depends on the material itself. One speaks here of his "specific resistance". Three values ​​as an example:

In practice, however, the conductance is also from Impurities and Lattice construction defects determines which occur in varying degrees in each material.

Most audio cables are made of copper. The price certainly plays a role here, but also the fact that some listeners perceive silver as "too brightly timed". Not all copper is the same.

The quality of this metal is judged according to several criteria:

The Crystal structure of the metal is said to be in connection with the "Direction of travel“Of a cable. The copper crystals are not arranged at random, they have one certain orientation. Some claim that this is audible - others never tire of making fun of it ...

It may contradict common sense - but the choice of insulation material around the individual conductors is one of the decisive factors for a good construction.

Air has the epsilonR.-Value 1, paper 2 and for certain types of ceramics four-digit values ​​are possible. The Strength (in the formula the "d") and the Art of the insulation material - as I said - essentially determine the capacitance of the cable. This cable capacity is seen as an essential parameter, especially for cinch and XLR connectors. High-capacitance connections between source and receiver can cause problems here:

For example, if the output impedance of a preliminary stage is relatively high and the input impedance of an output stage is relatively low, the problem can be exacerbated by a high-capacitance cable. Because a high capacity goes with you low capacitive binding resistance along with (Rc = 1 / (2 * Pi * f * C)). At low frequencies this is not a problem, the capacitive reactance is very high, but it decreases with increasing frequency. This can be thought of as a resistance connected to ground, which decreases with increasing frequency. As a result, more and more voltage drops at the output impedance of the preamp and no longer at the input impedance of the output stage. The setup is like one Low pass - the effects are a loss of height and a reduction in dynamics. In extreme cases, it can even lead to a clipping pre-stage, as the higher power demand caused by the low impedance of the output stage and the high capacity of the cable may no longer be able to be satisfied. (see Harley, 2004, p. 512ff.)

In addition to the effect on the capacity of a cable, the so-called "dielectric absorption“To be observed. This is the effect that a capacitor hasto its discharge again a certain Tension builds up and thereby is able to give off energy again. A typical measurement procedure is as follows: A capacitor is first charged for 5 minutes and then discharged for five seconds. Then let the connections rest for a minute and then measure the so-called "Recovery tension“Caused by dielectric absorption. The voltage is measured as a percentage of the (charging) voltage originally applied to the capacitor. The reason for the dielectric absorption is shown in Polarization effects (Charge shift) seen in the insulation material itself and is largely independent of the capacitance.

To come back to the topic of cables: It is easy to see that these recovery voltages are undesirable because they falsify the original signal by - with a time delay - the "first tension„ a „echo" Add. The electrical energy in a cable should ...

a) … preferably not at all be absorbed by the dielectric and ...

b) ... if it is recorded, if possible completely absorbed become (heat conversion).

c) If a) and b) are not possible and there is therefore a reflection, then this should be with if possible low phase error ("As quickly as possible") and across the frequency spectrum evenly respectively.

The choice of the right dielectric material influences the described effect. Air is often referred to as “the best dielectric” - this is what some manufacturers find fibrous or foam-like material with high air content use. Other good to very good materials are: polyethylene, polypropylene or Teflon.

Of course, a good cable also needs a good plug. Generally desirable are one large contact area and a high contact pressure at the transition point to the component or to the loudspeaker. Since high conductivity of the connector material is also important, copper (or its alloys) is usually used. The connection should still be resistant to oxidation - this is why surface refinements with gold, silver or rhodium are often found in practice.

Various techniques should guarantee contact with as little loss as possible:

This is how it is found on speaker cables Spreading banana by “turning” a wedge located inside the signal-carrying contact is displaced so that the plug contact spreads apart and a higher pressure is created on the contact surface of the socket. 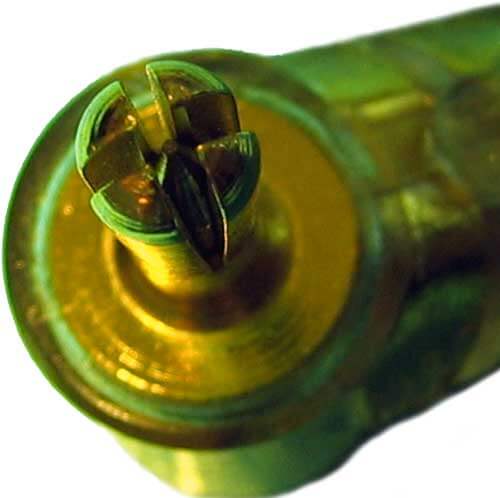 But that is also very common Hollow banana:

However, the classic, simple one Cable lug sometimes the more suitable means. Depending on the nature of the speaker terminals, they often enable an even stronger contact pressure. 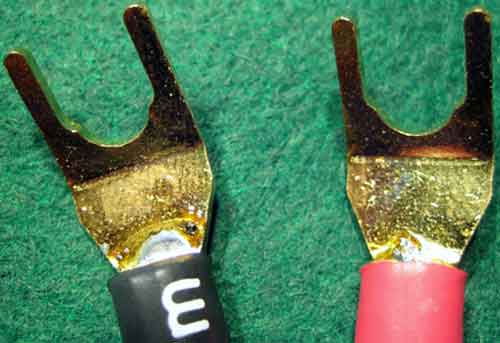 At RCA plugsOf course, the "WBT technology" is known: By screwing the outer ring, a firm ground contact with the socket is ensured.

The Neutrik connector On the other hand, it can also be plugged in and unplugged during operation: The upstream "ground sleeve" ensures that a ground contact is established first.

Due to possible inhomogeneities between the conductor cross-section and the connector pin, some prefer the (also coaxial) BNC connector. But it can be found more often in the studio area: 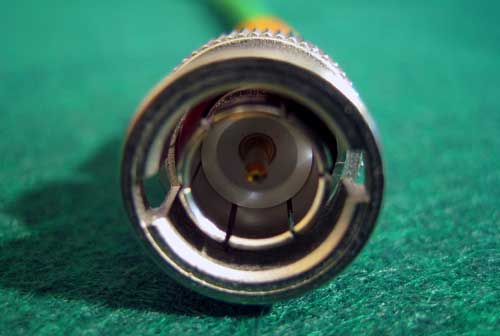 Of course, there should also be a good connection between the plug and the conductor of the cable. The best methods are certainly crimping or soldering - the latter is still the most common method. A Solder joint but can cause various problems: Environmental influences (temperature fluctuations, current loads, etc.) can possibly loosen the soldering point from the connector (partially or completely). Humidity can also affect the conductor / plug / solder connection over time. The lower conductivity of the soldering material itself is also not conducive to a low contact resistance.

So many think so Crimping (also called "cold welding") for better technology. A sleeve is squeezed over the end of the conductor with very high contact pressure and the largest possible contact area. The advantage is that here "Material with material"Is connected directly without the aid of a third material (the solder) - and ideally even airtight. A (“correct”) welding using high currents also occurs - the metals of the connector and the conductor melt here and form a firm connection.