What started the chemtrail conspiracy theory 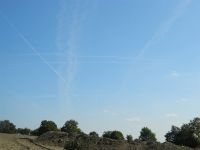 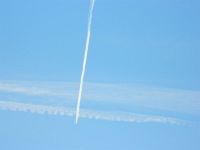 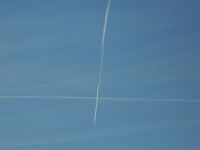 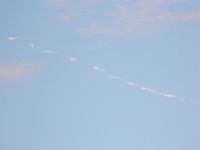 Ordinary contrails that are mistaken for "chemtrails"

The chemtrail theory has been around since 1996. The trigger was apparently the publication of an article by the US Air Force on military weather manipulation that may be possible in the future.

Initially, however, only a few believed that the article was a hidden indication that a weather manipulation was already being made and that this could be recognized by the contrails. The word "chemtrails" was first found on Usenet in 1999 (where internet discussions mainly took place in the 1990s). The breakthrough in terms of notoriety seems to be with the appearance of chemtrail "pioneer" William Thomas on the radio show Kind of Bell's To have taken place in 1999.

In this country, the breakthrough came in 2004 when the librarian Gabriel Stetter published an article about "the destruction of heaven" in the esoteric magazine Space & time published. As a result, the myth spread incredibly quickly. Authorities received hundreds of inquiries from concerned citizens.

Gradually the interest ebbed, but since the beginning of 2011 the inquiries have been increasing again.

For a long time I only noticed the topic in passing. In 2009 a reader of my website wrote to me that the harmful particulate matter was partly comes from chemtrails and that the many fine dust measuring points are actually supposed to monitor the chemtrail project.

On December 8th, 2010 I called the Austrian Environmental Aid because I wanted to know whether they still existed. Yes, they still exist, only the creator of their website died in 2002 and they have no successor. When I asked what they were doing, the friendly gentleman told me, among other things, that they fight chemtrails. You see from the
Earth found out that the contrails contain toxic chemicals. That puzzled me at the time because I didn't know that all long-lasting contrails are mistaken for chemtrails.

Starting in 2011, I occasionally read about chemtrails on an esoteric newsletter. In 2014, in the course of my research for the article "Chemtrails - no, thank you!" discussed with a chemtrail believer.