What are the attributes in BGP

This document is intended to provide a better understanding of the Border Gateway Protocol (BGP) Multi Exit Discriminator (MED) attribute when an AS (Autonomous System) boundary is crossed by implementation in different scenarios.

The MED offers a dynamic possibility of influencing another AS in such a way that a certain route is reached if there are several entry points for this AS. BGP follows a systematic process of choosing the best path. There are other important attributes such as weight, local preference, original route and AS path that are considered before considering the MED attribute. So if any of these criteria match, the MED attribute is ignored.

Note: If all other factors are equal, the starting point is with the lowest MED preferable.

Cisco recommends that you have a basic understanding of BGP.

When a BGP speaker learns a route from a peer, the MED of the route is passed to other internal BGP (iBGP) peers, but not to external BGP (eBGP) peers.

Routers R1 and R2 are configured as follows:

Router R3 configuration is given here:

In this configuration, iBGP is executed on R1 and R2. When an update with a certain metric gets into the AS, this metric is therefore used to make decisions within the AS. The command show ip bgp shows the metric value for 10.10.10.10 when activating R2. This value is set via the iBGP neighbor 192.1.12.1 and has a MED value of 100.

The output of R2 is pictured here: 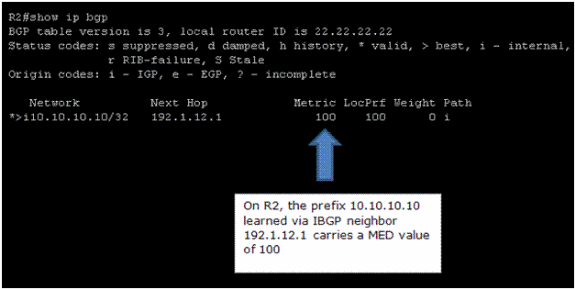 The output of R3 is shown here:

If the route fed into the BGP (either via the network or the command for redistribution) comes from an IGP (RIP or EIGRP or OSPF), the MED is derived from the IGP metric and the route is communicated to an eBGP neighbor with this MED.

The following network setup is used in this scenario:

Router R1 is configured as follows:

Routers R2 and R3 are configured for BGP, with redistribution done in R2 to inject the RIP networks into a BGP.

Both RIP and BGP run on R2. If you are using the command show ip bgp check, you can see it shows the prefix 10.0.0.0 network with metric 1 derived from the RIP.

The output of R2 is pictured here:

With R3 running on eBGP, however, the network is advertised taking into account the MED value derived from the IGP. In this case it's RIP. The prefix 10.0.0.0 is announced with the IGP-MED value, i.e. H. the RIP metric 1.

This can be seen in this issue:

In this scenario, the behavior of the MED for networks that use the network- Or redistribution command are passed to the BGP router, clearly recognizable where the actual MED value is replaced by the actual value of the IGP metric. Now that this attribute is a hint to external neighbors about the path preference in an AS. As mentioned earlier, there is not always consideration given to whether there are other important attributes in determining the best route. To get the same effect with a more deterministic attribute, use the Set as-path prepend command under the route overview. If you prepare the AS path for certain routes, it will continue to be displayed by other AS. For more information about using As-path prepend, see Using the Set-aspath prepend command.