What are some tips to spot pickpockets

Most tricksters and pickpockets work in teams and work in a division of labor: while one perpetrator distracts a person, for example, an accomplice commits the theft.

The repertoire is very diverse. We present some current approaches here:

On the train: simulated boarding aid

Pickpockets often spot travelers with luggage at train stations. A perpetrator is helpful and offers to carry the travel bag on the train. While this perpetrator hurries ahead or provokes a "traffic jam" in the boarding area of ​​a train, an accomplice takes the valuables from the victim's shoulder bag or handbag.

Illustration: Getting started (PDF, 427KB, file is not barrier-free)

In the crowd: shoving trick

One or more perpetrators bump into the victim in a crowd or take them "in a pincer". The accomplice is in front of the victim and suddenly stops. While the victim "runs up" on the accomplice and is thereby distracted, the pickpocket steals the valuables from the backpack

Illustration: Theft from a backpack (PDF, 440KB, file is not barrier-free) 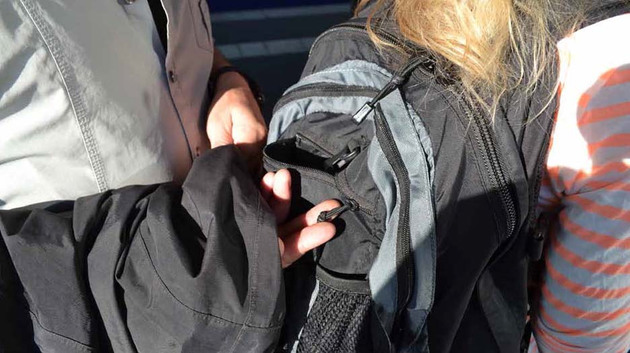 While the victim "runs up" on the accomplice and is thereby distracted, the pickpocket steals the valuables from the backpack

Theft from a suspended jacket

Rows of seats, for example on a train or in a restaurant, offer pickpockets a good opportunity. As soon as someone hangs a jacket over the seat, the pickpocket can access and remove the valuables inside.

Illustration:
Theft from a hanging jacket (PDF, 430KB, file is not barrier-free)

Escalators offer a variety of options for tricksters, for example:

This trick is mostly used by children who pretend to be deaf and dumb. A cardboard sign asking for a donation is held in front of the victim. While the victim willingly looks for change in the coin compartment of the wallet, the perpetrator, covered by the cardboard label, pulls the banknotes out of the bill compartment. Reaching into the open handbag is also conceivable.

Especially after visiting a bank, the victim is "accidentally" smeared with ketchup, ice or a liquid. If you try to clean it for a long time, the money you have just withdrawn disappears from your clothing pocket.

The pickpocket speaks to his potential victim, shows himself unfamiliar with the location and asks for directions while holding a city map. While the victim picks up the card and orientates himself, the pickpocket opens the handbag unnoticed. 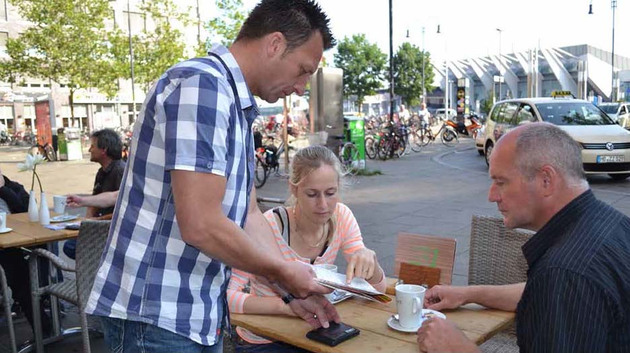 While the victim looks at the card, the perpetrator steals objects hidden with it unnoticed.

The pickpocket greets the victim exuberantly, claps them and hugs them to dance with them or puts their leg between the victim's to show them a soccer trick. The pickpocket or an accomplice exploits this inattention to steal the wallet or the mobile phone. The perpetrators have an easy job with drunk people.

In the supermarket, accomplices have certain goods explained to them. During the assistance, the bag in the shopping cart is searched and the purse or the entire handbag is stolen.

Variation: The pickpocket asks the victim to help them get a magazine off the upper shelf. When the victim takes the newspaper out of the upper shelf, the open jacket falls forward. The hand of the crime, covered with a magazine, then reaches into the inside pocket of the jacket and steals the wallet or the mobile phone. After the crime, the magazine covers the stolen property and the pickpocket leaves the scene.

Illustration: Theft from inside jacket pocket (PDF, 487KB, file is not barrier-free)

A perpetrator observes the victim entering the PIN number at the ATM. The accomplices provoke a traffic jam, for example, in which the wallet and EC card are stolen. The EC card is handed over to the perpetrator who spied out the PIN number. This then goes to the nearest ATM and withdraws money from the victim's account.