Why don't we get any more snow

Hardly anyone knows what winter is 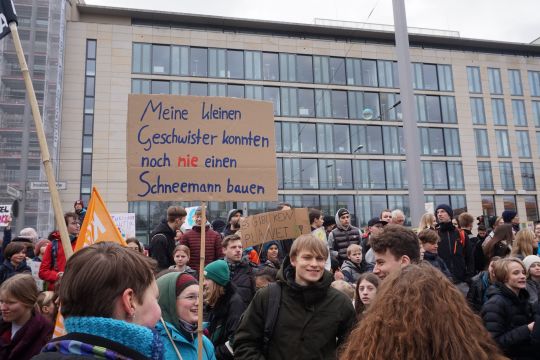 At a Fridays for Future campaign in Berlin. (Photo: Friederike Meier)

Snow falls in winter, sometimes a lot of snow. It used to be normal, nobody was surprised. It's different today.

"We often get emails with the question: 'Where is the climate change?'" Says meteorologist Andreas Friedrich from the German Weather Service (DWD) in Offenbach. Especially this winter, which has brought that white splendor down to the lowlands in this country, of which almost nothing was to be seen there in the last two years.

"Unfortunately, many people cannot differentiate between weather and climate. That is the problem," says Friedrich.

Climate icon Greta Thunberg also recently responded to such questions. On Twitter, the Swede, who initiated the Fridays for Future movement, quoted the assessment of environmental experts: "More snowfall in winter storms is an expected result of climate change. This is because a warmer planet evaporates more water into the atmosphere. " To then resignedly state: "This should of course be basic, general knowledge by now, but apparently it is not ..."

In fact, warmer air can basically absorb more water in the form of water vapor - it is seven percent per degree of warming. With the right weather conditions, precipitation can therefore be stronger - depending on the temperature either as rain or, if the temperatures are low enough, as snow.

Despite global warming, there can still be relatively cold winters, even if the temperature trend averaged over 30 years - as is usual for climate considerations - is clearly upwards. In Germany, the climate has already warmed up by 1.5 degrees compared to pre-industrial times.

Temperatures were low enough for snow, especially in January, which is now drawing to a close. Hence the snow masses in the low mountain ranges and the Alps. Nevertheless, the month was a bit too warm in Germany. Specifically: It is about one degree above the mean value of the internationally valid 30-year reference period 1961 to 1990.

In contrast, December, with its typical dreary weather, was far too warm and dry in comparison. The temperature average was 3.1 degrees Celsius, 2.3 degrees higher, and compared to the latest, warmer comparison period 1991 to 2020, the upward deviation was still 1.3 degrees. However, a drop in temperature of around ten degrees caused a white surprise on Christmas Day, at least in the low mountain ranges.

Memory of cold winters is fading

It is not yet possible to say what the bottom line of the meteorological winter will be this time. The third month, February, is still missing. To compensate for the warm months of December and January, it would have to be significantly too cold. That is rather unlikely.

The weather is currently divided into two: In the south-west and in the middle of Germany there is a strong thaw with maximum temperatures of up to 13 degrees on Friday, while it is significantly colder in the north and east.

The shift in perspective shows that almost "normal" January seems cold and snowy for many. "Human memory does not look back 30 years, but often only remembers the last ten years," explains DWD meteorologist Marcus Beyer. In this respect, it is understandable "that this winter is already felt to be quite neat".

What exactly did that mean at the time? In Frankfurt am Main, for example, where it is mild compared to Germany, there was a blanket of snow on 48 days in 1978/79, and the lowest temperature reached minus 17 degrees. In other regions of the Federal Republic of Germany and the GDR, the temperatures were sometimes significantly lower and the snow higher. "You simply can't imagine a winter like it was back then today," Beyer sums up.

There is one limitation, however. Even if the trend is clearly towards milder winters, prolonged extreme cold spells are also possible in Europe and North America in the future - as was most recently in the USA in 2019. They could even become more common, as climate researchers expect. The cause is then arctic air masses that detach from the polar vortex, which normally circles the North Pole in a relatively closed manner.

The experts warn that one cause of such instabilities could be the changed flow conditions in the atmosphere due to climate change. That means: There can be bitter frost - and still get warmer.