Ford's death was announced by his wife Betty late Tuesday evening (December 26, 2006, local time) in Rancho Mirage, California. Ford was the 38th President of the United States and the only one who was not elected neither as Vice President nor as President by popularly elected electors. When Vice President Spiro Agnew resigned during Richard Nixon's presidency in 1973, Nixon named him as his successor. Both the US Senate and the House of Representatives approved this decision. When Nixon finally had to resign in the wake of the Watergate affair, Ford took over the presidency.

US President George W. Bush received the news of his predecessor's death with sadness. Bush called Ford a great American who had served the country faithfully for many years. Ford took office in an hour of national division and then helped restore confidence in the presidency, Bush said on Wednesday in Crawford, Texas. "Our 38th President will always have a special place in the memory of our nation," said Bush.

Ford was born in Omaha, Nebraska on July 14, 1913 and studied law at Yale. During the Second World War he served on an aircraft carrier in the Pacific. In 1949 he won a seat in the House of Representatives, which he would hold for 24 years. He quickly gained a reputation as a man of the greatest integrity. In 1973 Nixon nominated Ford for the office of vice president.

Ford became president on August 9, 1974, following the resignation of Richard Nixon. His three years in office until 1977 were not a good star. He faced the aftermath of the Watergate affair and the withdrawal of the last US soldiers from Vietnam. In addition, he had to fight above all against galloping inflation. The economy slid into recession. 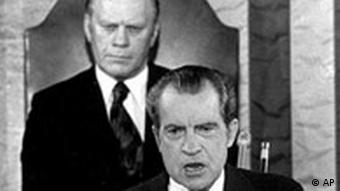 One of his first acts as president was to grant his predecessor Nixon a full amnesty. In the opinion of many, this step cost him the election victory in 1976. The following year he was replaced by Democrat Jimmy Carter. In his last speech on the State of the Union in January 1977, Ford, who had already been voted out of office, emphasized that he had succeeded in reuniting the nation that had been divided as a result of the Vietnam War and in having re-strengthened confidence in the post of President after Nixon. Experts saw it similarly and valued Ford's presidency higher than the population generally felt. 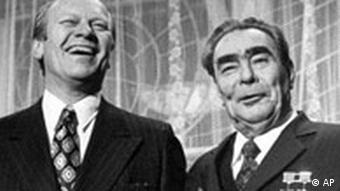 Humorists were constantly targeting Ford, a promising football player at a young age: He was considered clumsy because he hit his head more than once while exiting Air Force One and stumbled down some stairs.

A US president has never gotten older

Ford became the oldest of any previous president of the United States. In August he received a pacemaker and in January 2006 he was in hospital for almost two weeks because of pneumonia. In 2000 Ford suffered one or more minor strokes. In 2001, three days after September 11th, he attended a memorial service for the victims of the terrorist attacks with ex-Presidents Carter, George Bush and Bill Clinton. In June 2004, he attended the funeral service for the late former President Ronald Reagan with the other three former presidents. (sams)