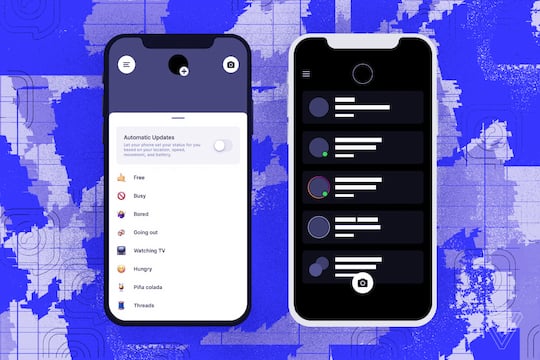 According to The Verge, this is the draft of the new thread app.
Ilustration: Alex Castro / The Verge A bitter battle is raging among the messenger services and those who are at the forefront today can be on the decline tomorrow. Like Snapchat right now. The service is particularly popular with young users. At the end of last year, however, there was an initial decline in users.

Things have been improving a little for a few weeks now, but now there is a threat of new adversity. Instagram, Facebook's picture service, appears to be planning an attack on Snapchat, according to The Verge website.

According to The Verge, this is the draft of the new thread app.
Illustration: Alex Castro / The Verge

For the closest friends only

The means to an end is a new service called Threads, which is supposed to allow communication only between closest friends. You can already create a corresponding list on Instagram. Threads should not become part of Instagram, but an independent app.

Otherwise, Threads is similar to the messenger service already integrated in Instagram. Texts, pictures and videos can be sent, which can be edited beforehand with the Instagram tools. The news appears in a central feed, and newly published stories can also be viewed by friends. A green point indicates whether someone is currently active.

Not the first attempt

Instagram has already tried a similar attempt as with threads. The Direct app was launched in selected countries in December 2017 and aimed precisely at the core competencies of Snapchat. It was started directly in the camera app and had a very similar structure to that of the competition. Direct was discontinued in May. Above all, the beta testers complained that they didn't want to switch between two apps all the time. Threads may have more chance of success here. Restriction to a small group of friends could be the guarantee for this.

This restriction also fits in with Mark Zuckerberg's statement that he wants to gear the services under the umbrella of Facebook to more privacy in the future. In March, he announced, among other things, that more and more of the group's offers would receive complete encryption based on the model of the WhatsApp chat service. You can read more details in our report.