Aluminum has a metal fatigue limit 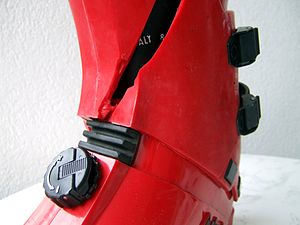 Hard shell of a ski boot broken due to material fatigue

The Material fatigue describes a slowly progressing damage process in a material under environmental influences such as changing mechanical stress, changing temperature, UV radiation, radioactive radiation, possibly with the additional influence of a corrosive medium.

Material fatigue means that even a statically uncritical load (still in the elastic range, i.e. still below the yield point of the material) can lead to malfunction (fatigue crack formation) or even to total failure (fatigue fracture) of a component if it acts often enough on the component.

Parts subject to cyclical loads therefore generally have a limited service life. For this reason, a service life assessment, calculation or tests must be carried out on critical components before they are used, which allow an assessment of the durability of the component. Components that can theoretically withstand an unlimited number of cycles (because they consist of certain, suitable materials) are referred to as fatigue-resistant.

Simple example: The holder of a ballpoint pen can be bent back and forth elastically several times. However, the greater the number of bending operations, the greater the likelihood of breakage. The expression "constant dripping wears away the stone" or the philosophical law of "turning quantitative changes into qualitative ones" describes this phenomenon.

A close look at the fracture pattern of a component shows whether there is a force or a fatigue fracture. Conclusions must be drawn from this in order to avoid component failure in the future.

The process that ultimately leads to the failure of a component or material due to the formation of a crack, reaching a certain crack length or fatigue fracture is referred to as mechanical material fatigue of metallic materials. The process begins with local dislocation movements that occur even with loads below the yield point, especially on the component surface at cross-sectional transitions and surface notches or in the volume of material inhomogeneities such as inclusions, pores, precipitations, dispersions, etc. due to local excessive stresses. Repeated loading results in statistically randomly distributed areas of local plastic deformations. In the further course of the load, dislocation configurations develop, which can have a damaging effect by concentrating plastic deformations on very small areas. The further behavior under cyclical loading is heavily dependent on the material and its history. Usually fatigue sliding bands, so-called persistent sliding bands, form in material areas close to the surface, which then form so-called ex- and intrusions on the component surface at 45 ° to the direction of loading (highest shear stress and therefore preferred direction of dislocation movement, Mohr stress circle). These act like sharp notches and initiate micro-cracks that run parallel to the sliding bands. After a few micrometers (often around twice the grain diameter of the structure) the cracks swivel around and run at 90 ° to the direction of stress. When a certain crack length is reached, one speaks of macro cracks or so-called technical cracks, which spread depending on the crack geometry, the type of stress (crack mode) and the height. If the crack reaches the so-called critical crack length, the component fails due to unstable crack propagation (force fracture) in the remaining cross-section.

The theory of fatigue strength was the first to be investigated by August Wöhler from 1858 onwards. Until then, only stress tests were made static Load carried out. Static load here means the load on a body (object) with a constant force from a constant direction. As an example, placing a stone on a table is mentioned here. The stone has a constant mass and exerts a constant force on the table due to the acceleration of gravity. If the force exceeds a certain value, the table will collapse.

With the advent of the railroad, problems arose unexpectedly. According to static calculations, the wheels of the wagons should have easily absorbed the stresses and strains of the journey without being damaged. However, more and more railroad cars failed because the wheels were broken. Wöhler investigated this phenomenon and discovered that oscillating loads can damage a component even if it is obviously not damaged by a single load with the same force.

The maximum number of load changes for a certain deflection is shown in the Wöhler line. It depends on the material properties (cyclically strengthening / cyclically softening), the force or the resulting tension and the type of load (alternating / swelling (pressure or tension)). With the same displacement amplitude, the changing load damages the component the most.

Example: A screw which z. B. is used to attach an exhaust to the vehicle, can break because of the vibrating load of the vehicle movement, although the actual yield point has not been reached. This effect can be intensified by corrosion and / or temperature.

High-frequency pulsators are used to determine the fatigue strength of materials and components in the time and fatigue strength range, for example in the fatigue test according to the DIN 50100 standard (Wöhler curve), in the tensile, pressure, swell and alternating load range.

Fatigue strength is a term from the field of strength and describes the load limit that a dynamically (e.g. vibrating) loaded material can endure without significant signs of fatigue or failure.

In addition, the static rest load, the so-called medium voltage, must be taken into account. It has an enormous influence on the behavior of the material. Depending on the medium voltage, one speaks of alternating strength or threshold strength:

Theoretically, one can specify an infinite number of fatigue strength values ​​- consisting of a mean stress and a stress excursion - for every material. In the so-called Haigh diagram, the fatigue strength is plotted against the stress ratio R. R denotes the ratio of low to high voltage.

Materials with a face-centered cubic crystal lattice such as B. Aluminum do not show this limit value by the way. Here, even with low stress amplitudes, "long-term" symptoms of fatigue are to be expected.

In the case of voltage fluctuations above the fatigue strength, significant signs of fatigue and damage occur; only a certain number of load changes until breakage (breaking frequency) is endured. This dependency is shown in the Wöhler diagram, a dimensioning aid for engineering designs based on the principle of operational stability. To determine the Wöhler curve, see also Wöhler experiment.

If the material is so heavily loaded that it can only withstand the load for a certain period of time, it is called fatigue strength. This is usually given in a certain number of oscillation cycles, which are then converted into a period of time.

The fatigue strength is defined differently. Materials whose specimens withstand 2 $ \ cdot $$ 10 ^ 6 $ to $ 10 ^ 9 $ backlash without breaking are considered fatigue-resistant.

With the Wöhler experiment the fatigue strength of materials or components is determined (component Wöhler test). For this purpose, the test bodies are loaded cyclically, usually with a sinusoidal load-time function. The load amplitudes and the stress ratio from underload to overload (the so-called degree of rest [R]) are constant.

To determine the values, the test bodies are tested on several load horizons. The test runs until a defined failure (breakage, crack) occurs or a specified number of limit cycles is reached. Test specimens that reach the limit number of cycles without recognizable failure are referred to as runners. 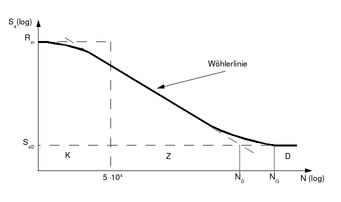 Qualitative representation of the Wöhler curve

The results of the experiment are entered in a double logarithmic diagram. The nominal stress amplitude S is usually used in the Wöhler diagrama Plotted against the tolerable number of cycles. The resulting curve is called the Wöhler curve or Wöhler line. The three areas K, Z and D are shown in the adjacent SN curve.

Below the fatigue strength SaD In principle, a component can withstand any number of oscillation cycles. Loads above the fatigue strength cause failure of the component after a certain number of cycles. The number of endurance cycles of a component under operational load (variable load amplitudes) up to failure can be predicted within the scope of statistical accuracy with the help of the Wöhler curve. To do this, the methods of linear damage accumulation according to Palmgren, Langer and Miner are used. One speaks here of the operationally stable dimensioning of a component. Fatigue strength is used today in almost all areas of technology for the purpose of lightweight construction.

With the cyclical loading of steels, one can distinguish between four fatigue stages, according to Machera:[1] The elastic-plastic alternating deformation stage, the microcrack formation stage, the stage of stable crack propagation and finally the fatigue fracture. In hardened steels, the alternating deformation stage predominates and microcracking only occurs shortly before fatigue failure. In the case of normalized or quenched and tempered steels, the stable crack propagation can cover a considerable part of the service life, depending on the level of stress.

In the case of elastic-plastic alternating deformation, the stress-total strain relationship produces hysteresis loops,[2] from which various parameters can be derived from sufficiently stabilized material behavior according to Figure 17. In the case of a stress-controlled experiment, the total strain amplitude εat and the plastic strain amplitudes εa, p as a function of the number of load cycles N. Cyclic solidification (softening) is with a decrease (increase) of εa, p and thus also from εat connected. In contrast, when the test is carried out with total strain control, the stress amplitudes σ arisea and the plastic strain amplitudes εa, p as dependent quantities. A cyclical solidification (softening) is with an increase (decrease) of σa and a decrease (increase) in εa, p connected.[3] If the dependent variables are plotted for a given stress amplitude as a function of the logarithm of the number of load cycles, so-called alternating deformation curves result. If one takes from these associated value pairs of σa and εa, p or εat and if these are applied against each other, the cyclic stress-strain curve is obtained. This can be taken from the stress-strain curve of the tensile test, as well as cyclical yield and elongation limit values.

The alternating deformation curves allow conclusions to be drawn about the material behavior during cyclic loading. Normalized steels usually show, after a quasi-elastic incubation period, a load cycle interval of strong alternating softening, which is followed by a service life range with alternating hardening. The alternating softening observed is due to the occurrence of elongation inhomogeneities, which run as fatigue Lüders bands over the measuring section.[4]

Quenched and tempered steels also show a strong alternating softening after an incubation period, which lasts until cracks form. As the voltage amplitude increases, both the incubation time and the service life decrease. Since the formation of new dislocations is unlikely because of the very high density of dislocations, the plastic deformations that occur must be generated by rearranging the existing dislocation structure.In the case of hardened material states, there are increased opportunities for the dislocations to interact elastically with the carbon atoms dissolved in an increased non-equilibrium concentration, which leads to alternating hardening. Since the proportion of dissolved carbon is reduced by tempering, the possibilities for interaction between the dislocations and the carbon atoms are reduced and the dislocation structure is transformed into alternating softening.

where c and n are constants. A double logarithmic plot of da / dN over ΔK results in a linear relationship. Crack growth no longer occurs below a threshold value of ΔK. With very high ΔK values, unstable crack propagation leads to breakage.