Where is Europe's air cleanest?

"Smog is very tangible. You can see it, you can smell it," Andrzej Gula told DW. "People in Krakow joke that you can even bite him." Krakow people try to take it with humor, even if air pollution can kill several thousand people in Poland every year.

For many Poles, checking smog levels is now part of everyday life, as is wearing respiratory protection masks. On a few days, children and the elderly are advised to stay at home - taking a deep breath outside is too dangerous. There is a risk of headaches, dizziness and shortness of breath in addition to long-term effects such as respiratory diseases and heart problems.

The worst season is yet to come in Poland. In winter, the smog increases dramatically, as many people still traditionally heat with wood and coal. In the winter months, people's clothes stink of smog, says Gula. He compares the dirty air people breathe to smoking. Activists estimate that anyone who lives in Kraków inhales as many pollutants every year as if they were smoking 3,000 cigarettes.

Increased particulate matter pollution is particularly dangerous for health, as the microscopic particles can penetrate deep into the lungs. Although the number of premature deaths from air pollution has steadily decreased over the past three decades, pollution levels still remain dangerous and illegally high. It is much better today than it used to be: in 1990, high levels of pollution caused almost twice as many deaths as today. However, around 90 percent of Europeans who live in cities still breathe air that is harmful to health, according to the EEA. Air pollution remains the greatest health threat in Europe. 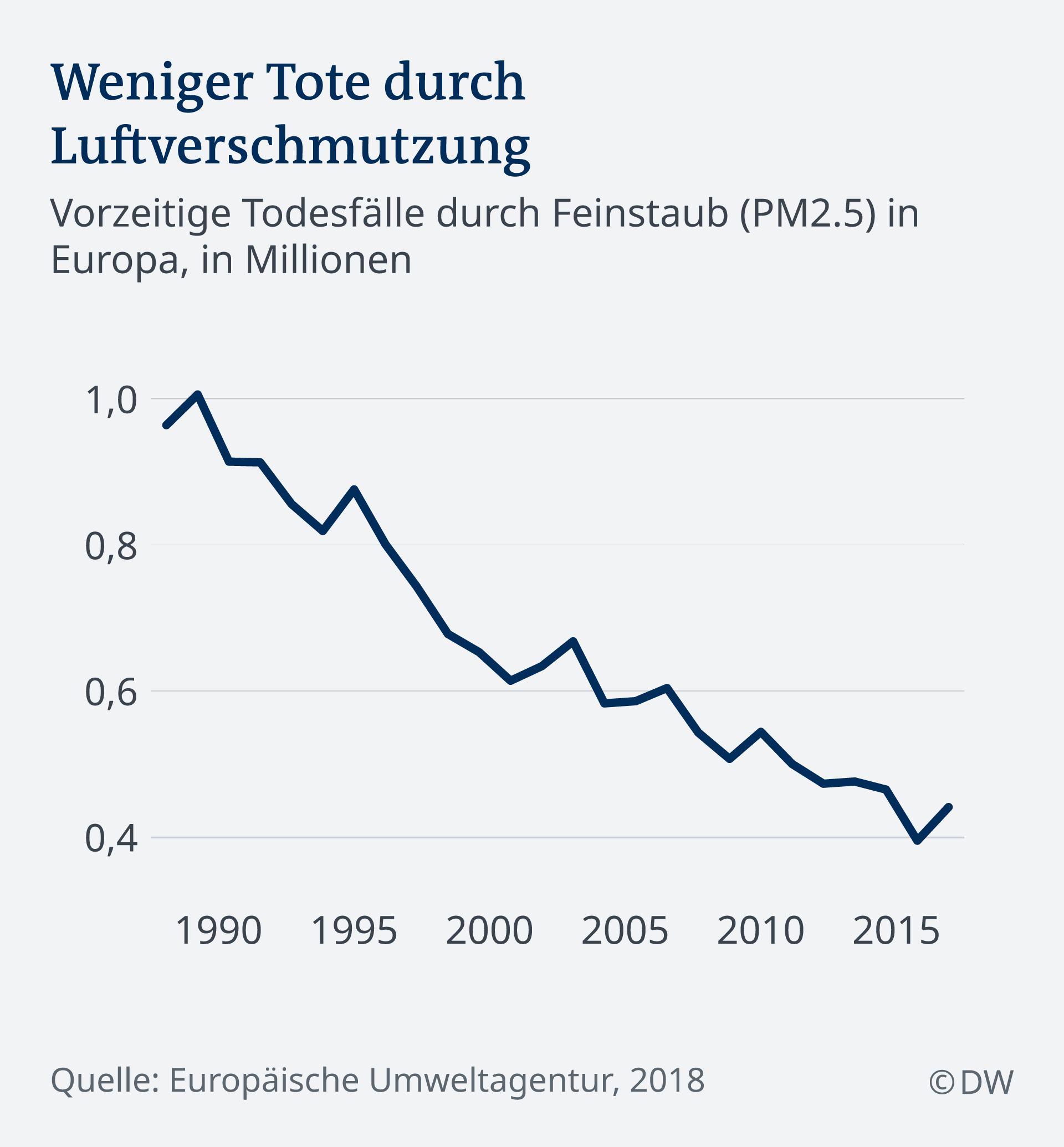 In addition to fine dust, the air contains other pollutants such as nitrogen oxides, ozone and ammonia, which are emitted by industry, road traffic, agriculture and heating. While pollutants have been reduced in almost all areas, ammonia emissions in agriculture remain high. Alberto González from the European Environment Agency is particularly concerned about this. Because when the gaseous ammonia penetrates the atmosphere and reacts with other pollutants from vehicle exhaust, new fine dust is created, the deadliest pollutant for humans.

Around 94 percent of ammonia emissions in the European Union arise in agriculture, especially in animal husbandry. There have been no major emissions reductions in agriculture since 1990. "It is very important that we finally get involved in agriculture to fight air pollution," González told DW.

Where in Europe is it unsafe to breathe?

The air is not always bad everywhere in Europe. In general, pollution levels in Central and Eastern Europe are higher than in the rest of the EU. Bulgaria has the worst air and has the highest number of premature deaths from air pollution. The main reason for this are particulate matter emissions from heating, says González.

More on deaths from pollution here: Be careful with epidemiological studies

and here: Epidemiologist: Deaths can be estimated 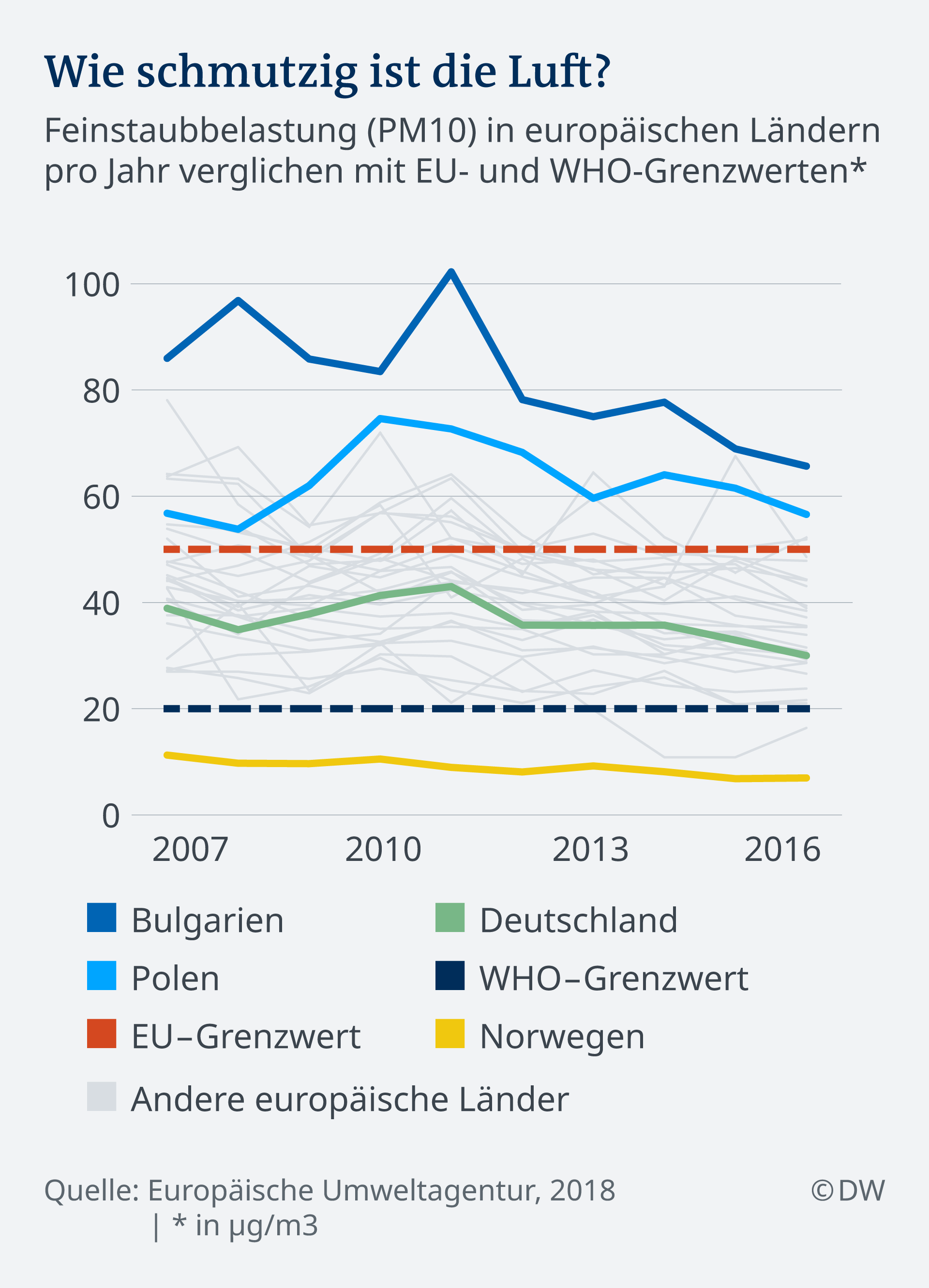 Poland, host of this year's climate conference in December, follows Bulgaria on the list of European countries with the worst air quality. Air pollution kills around 45,000 people every year in Poland, experts estimate. According to the WHO, 33 of the 50 dirtiest cities in Europe were in Poland last year. One of these cities is Katowice, where the climate conference will take place. In Poland, too, coal-fired and wood-fired heating systems are the main sources of smog and particulate matter emissions.

Germany is in the middle of the field. If all the data are combined, the Federal Republic of Germany will comply with the annual EU limit values ​​for fine dust pollution. But especially in cities, the air is often significantly worse. In Stuttgart, for example, 64.40 micrograms of fine dust are measured per cubic meter of air, the legal limit is 50 micrograms.

Norway, on the other hand, is the only country in Europe where the air is consistently cleaner than the WHO demands, which has stricter limit values ​​than the EU. Norway's green strategy, such as promoting clean vehicles, is paying off.

In some countries there is a growing awareness among the population of how dangerous polluted air is. Air pollution is making headlines in Poland too, thanks to campaigns by activists like Gula in Krakow. At the same time, pressure from the EU has led to a rethink, says Przemyslaw Hofman, head of the low-carbon economy department in the Polish Ministry of Entrepreneurship and Technology.

The Polish government now wants to do something for better air and has banned the sale of heating systems that do not meet emission standards. For this purpose, it is providing 25 billion euros over the next ten years so that poorer residents can also swap their old heating systems for newer, clean heating systems.

Regional governments are even a step further. In Krakow, most coal-fired heating systems have been replaced by less polluting alternatives such as gas heating. Krakow will soon be the first city in Poland to completely ban the use of wood and coal.

Since 2013, a package of measures for clean air has been slowly improving the situation at EU level. By 2030, air pollution is to be reduced significantly and the number of premature deaths halved. That is only possible if all countries adhere to the guidelines. However, it does not look like that in many member states at the moment. In May, the EU Commission sued Germany, France, Great Britain, Italy, Hungary and Romania for bad air in the cities.