Who is Manasa Devi 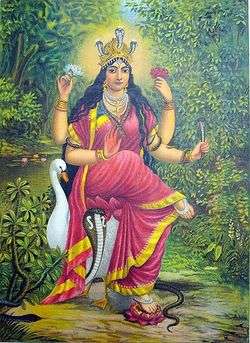 Manasa Devi, the goddess of snakes

Manasa, the Hindu goddess of snakes

Manasa is famous as the very powerful goddess of snakes and is worshiped in different shapes and with different names all over India. The goddess is mainly worshiped in the rainy season when the snakes are most active. There is a belief that manasa protects people from snake bites. She is known as the daughter of the famous sage Kashyapa and Kadru, the sister of the serpent king Shesha, who is also the sister of Vasuki, one of the most important Nagas. Manasa is known as the pre-Aryan goddess who is widely worshiped in different parts of West Bengal. Usually she is invoked with offerings and offerings.

The story of Manasa is called "Manasamangal," which tells the story of her recognition and how she got her place in the pantheon of Hindu gods and goddesses. It is also the name of a certain form of Vishnu, born from Sambhuti, along with the gods of Abhutarajasa in the Rawala Manwantara.

Manasa, the mythical deity of snakes, was worshiped for the prevention and healing of snake bites, and also for fertility and abundance. In the Puranas, Masana has the role of the sister of Vasuki, King of the Nagas. She is the wife of the great sage Jagatkaru. Manasa is also known as Vishahara, the destroyer of poison.

The legend of the goddess Manasa Manasa Devi was the daughter of Shiva and a beautiful mortal woman. Her stepmother, Bhagawati or Parvati, didn't like her; therefore she took up residence on earth with another daughter of Shiva, named Neta. Manasa desired the due veneration of the goddesses, and knew that it would be easy to obtain if she could only secure the veneration of the rich and powerful merchant prince of Champaka Nagar, called "Chand Saudagar" in Bengal . He was a widower and had six sons. He was very attentive to his sons so that they never felt their mother's absence. She tried to convince him for a long time, but he was a staunch admirer of Shiva himself, whom he did not want to abandon for a snake goddess. Therefore, Manasa destroyed Chand's magnificent garden several times and each time Chand was able to restore the beauty of his garden with the help of his magical powers, which he had received from Shiva.

One day Manasa took the form of a beautiful virgin and appeared before the widower Chand, who was delighted with her beauty. He decided to marry her, but the lady requested that the magical powers be transferred to her before the wedding, and Chand did so. Then Manasa showed her original self and again ordered Chand to worship her. This time too, Chand rejected her request. As a result, Chand's six sons were killed with snakebites.

Chand remarried, had a son, and named him Lakshmidara. Lakshmidara grew up to be a handsome fellow, and Chand chose the beautiful girl Behula to marry him. The couple became engaged and a wedding date was set. During these years Manasa did not give up hope and reappeared with her determination to subdue Chand by killing Lakshmidhara.

Manasa killed Lakshmidhara, and finally Lakshmidhara was brought back to life through the love and piety of Behula. Behula convinced her father-in-law to worship the goddess Manasa, so Chand agreed and promised to worship Manasa by performing the ceremony with his left hand. This was accepted by Manasa, and Chand worshiped Manasa with all devotion. Through this legend of the goddess Manasa, Manasa Devi got a lot of good standing and people worshiped her in all parts of India.

Video on the topic of Manasa

Manasa is a Sanskrit word. Sanskrit is the language of yoga. Here is a lecture on yoga, meditation and spirituality