The veal hump near Kleinostheim am Spessart -
a classic site for staurolite!

by Joachim Lorenz, Karlstein a. Main 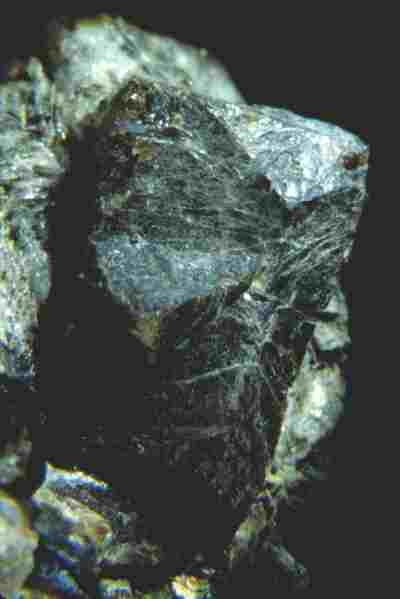 Important NOTE:
Evidence can only be collected with perseverance in the small quarry on the west side of the heavily overgrown mountain slope, as everything has now been searched and no fresh rock has been extracted for decades. Summary
For a long time, mostly cracked staurolite crystals up to 2 cm in size have been found in the staurolite-garnet-plagioclase gneiss. With the appropriate perseverance, finds are still possible today. The best discoveries were made in how the gas pipeline had been laid at the foot of the hill and the road had not yet been paved.

location
It is a small wooded ridge that shows a small old quarry as well as rocks. 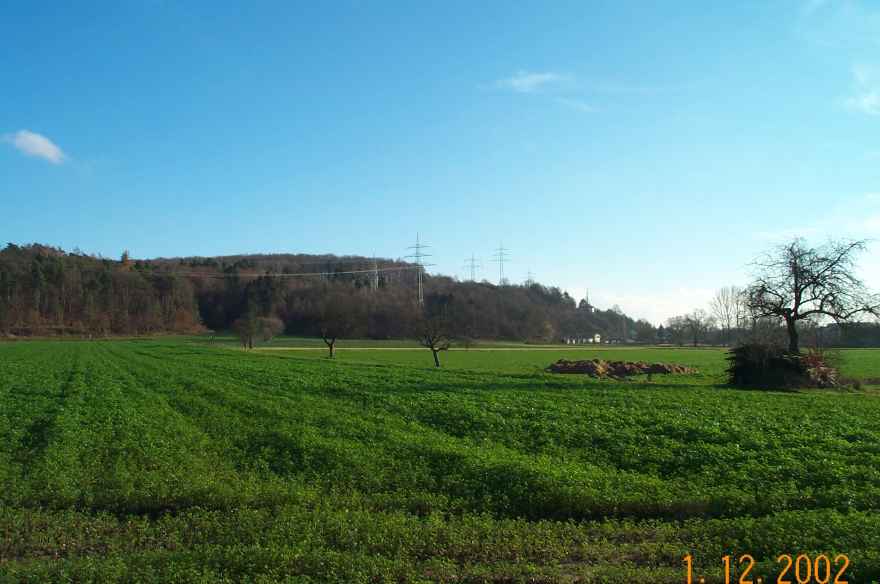 The easiest way to get there is from Bundesstraße 8 via the underpass at the train station in Kleinostheim and then parallel to the train to the west to the Schützenhaus. The last part of the road is only partially accessible (note the prohibition signs! See OKRUSCH et al. 2011, p. 149, information no. 23 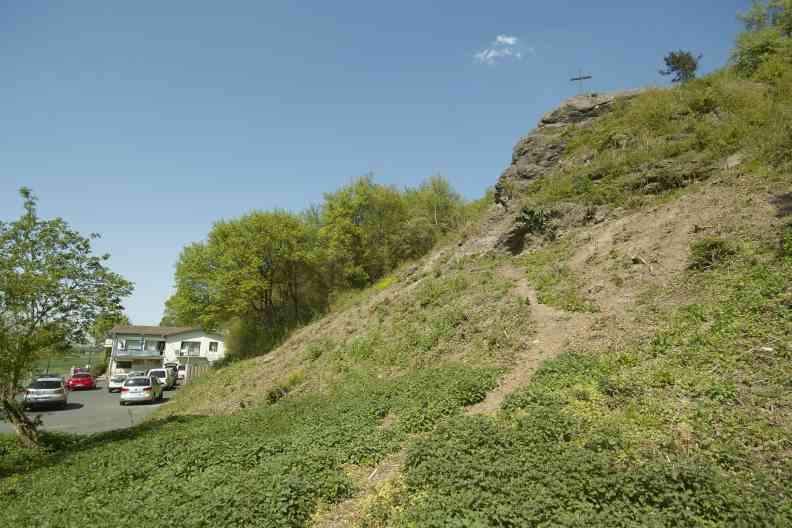 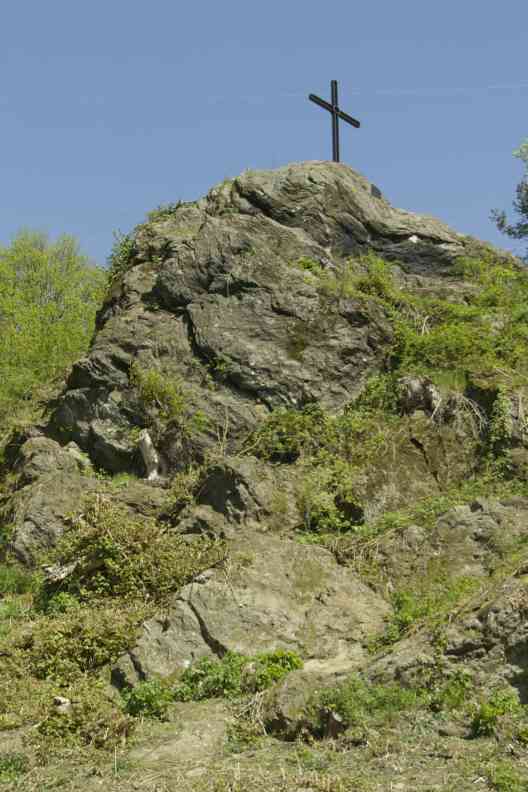 In the late winter of 2012, the slope with the rocks (known in Kleinostheim as "Ellertstein" or "Kettelerfelsen", after the Mainz Bishop Wilhelm E. Freiherr v. KETTELER (* December 25, 1811 † July 13, 1877) of the calf's hump next to the Schützenheim (left A new cross was set up on the top of the rock (Main-Echo of April 3rd, 2012, p. 19). The old cross was from 1946 and was getting on in years new one, which was donated by Horst FLEISCHER. The free cutting is a great thing, you have to be grateful to those who did it, because now you can see rocks again and can climb up to the cross without injuries. April 2012 at 30 ° C and a blue sky.

geology
At the edge of the crystalline basement of the Spessart, a staurolite gneiss stands right next to the sediments of the Main. The Spessart Edge Fault runs not far from here. During the last glacial period, the Main flowed directly past the rocks.

In the small quarry and the rocks above ("Kettelerfelsen", but strongly overgrown) consists of a barely fissured gneiss, which is very rich in the brown, up to cm-large, idiomorphic staurolite crystals. These are usually surrounded by the mica and therefore only loosen from the rock to a limited extent. Since the other rock minerals have often grown into the interior of the staurolite crystals, they break easily or have no smooth crystal surfaces.
In contrast to this, there are also small, thin, black tourmaline pillars with end faces, which, however, are not surrounded by mica and can easily be prepared. 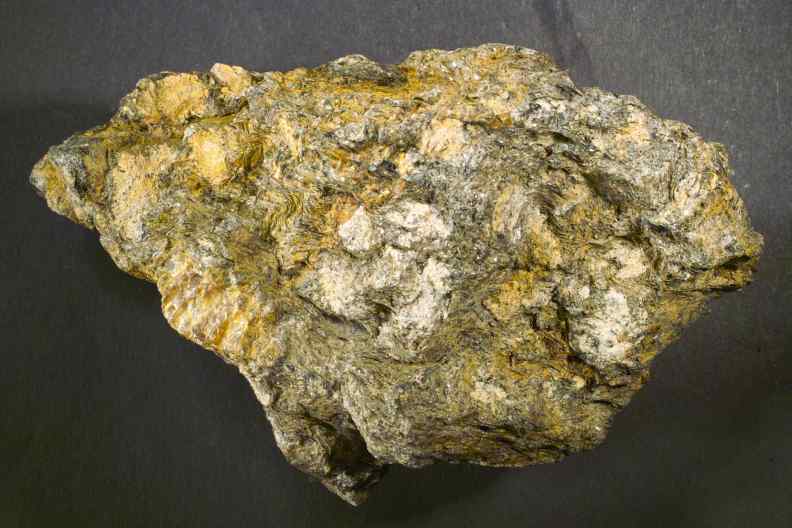 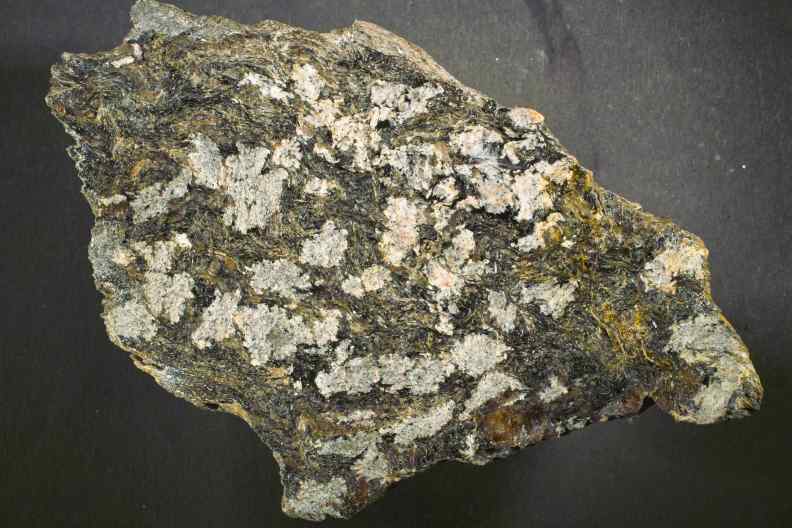 Piece of staurolite-garnet-plagioclase-gneiss (actually a piece of mica slate, left in the quarry like from a quarry, right ground and
polished, image width 13 cm) with the feldspar grains (porphyroblasts) barely visible in the break.

The staurolite leading mica schist was formed from a clayey sea sediment (turbid deposits or turbidites) Cambrian or Ordovician age. The layers poor in mica have a greywacke as a forerunner. These sediments were probably located in a shallow sea area on the Baltic shelf. 6 kbar and temperatures of 600 - 650 ° C were derived as pressures (OKRUSCH et al. 2011: 151).

history
The very small quarry on the slope with the few rocks has certainly not been used for more than 30 years. Local collectors made good finds during the construction of the rifle house and the road.
The last noticeable "mining" activities probably took place on the occasion of the annual meeting of the Upper Rhine Geological Society in Aschaffenburg in 1967, when the 547 Engineer Corps of the American Army thankfully provided "fresh rock"! According to BACKHAUS, the approval for the activities was given by the municipality of "Mainaschaff" (?). The history of the rock and its use was described in detail by LANG (2013). However, there is enough rock in the area that can be searched for the staurolite crystals.
The striking rock, which is located a little to the south and above the parking lot of the Schützehaus, was exposed and protected from vegetation as a natural monument: 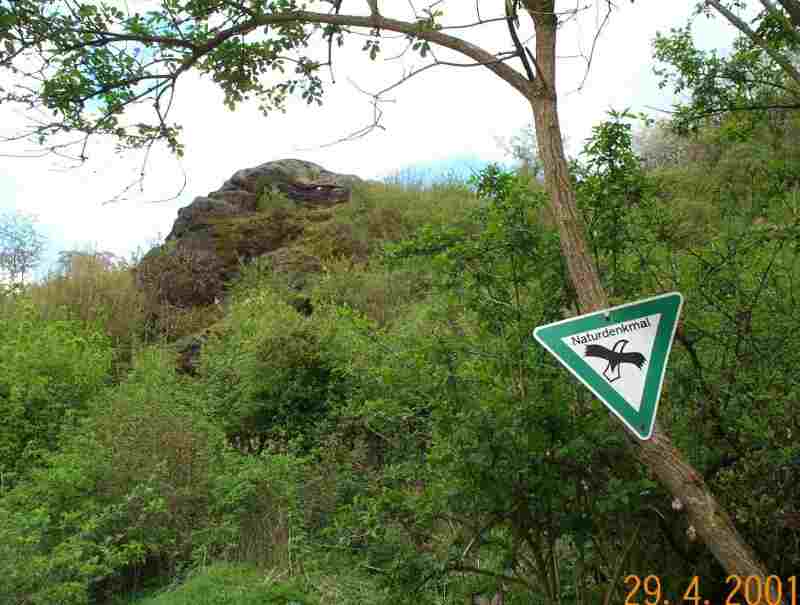 Minerals
The rock contains the following minerals, but in widely varying proportions: 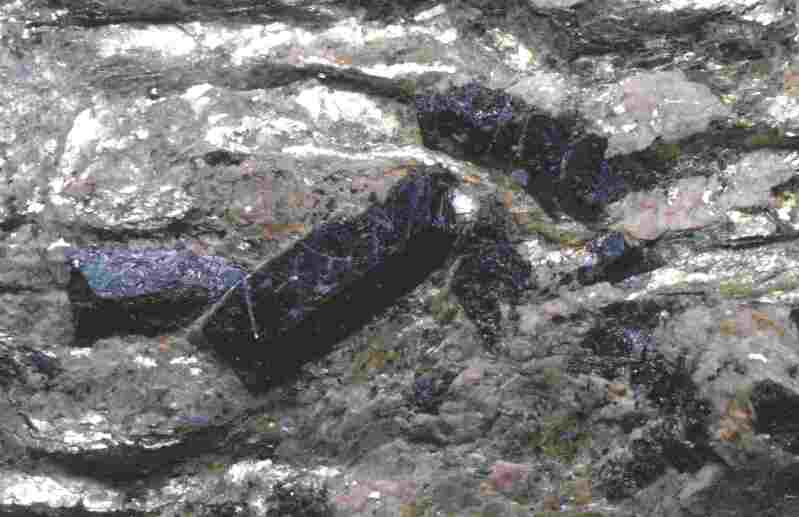 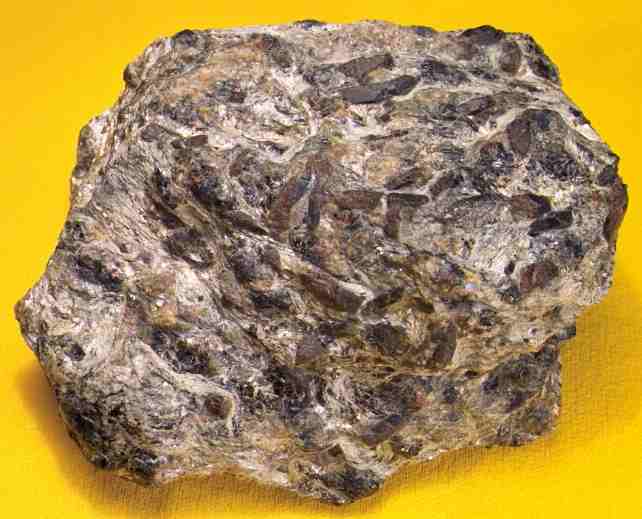 Colorless kyanite crystals in gneiss, found in 1974
Image width 2 cm
Larger pieces of rock can be found in places in the gardens of Kleinostheim. Since the rock also occurs in other parts of the Vorspessart, similar finds can of course also be made there. For example, the Wenighösbach and Feldkahl areas, but also the Aschaffenburg-Damm area, are mentioned here.

The place is one of the most famous sites for the mineral staurolite in Germany. The island silicate staurolite belongs to a group of several minerals with very similar external properties but different chemical compositions:

They can only be differentiated by chemical analysis. Staurolite is widespread in metamorphic rocks, but beautiful crystals are not that common. Usually mica crystals or other minerals have grown in (porphyroblast), so a pockmarked image can be observed on the crystal surfaces. Adhesions between staurolite and cyanite are known from some sites. The size of the crystals ranges from a fraction of a millimeter to 10 cm - but such large crystals are not known from the Spessart. The name is derived from the Greek "Kreuzstein", since cross-shaped adhesions (twins after (232)) are not uncommon. The brittle and very hard mineral crystallizes in the monoclinic crystal system. It is very resistant to acids and weathering, so that it can also be found in the heavy mineral fraction of sediments due to its high specific weight of 3.7 - 3.8 g / cm³.

Heavy metal zinc - a problem?
As you can see above, the heavy metal zinc is fixed in the crystal lattice of the staurolite. The very stable - chemically and mechanically - silicate staurolite (it is found in the heavy mineral fraction of sands) is completely insoluble in the soil and our climate, so that the zinc could not be released in historical periods. If someone now builds in the area of ​​distribution of the Mömbris Formation, the soil or rock can become a problem due to a locally high staurolite content, because the LAGA allocation values ​​for zinc are (far) exceeded. Then it can happen that a building owner has to dispose of the "contaminated" excavation at a dump at great expense. In Germany, for example, a large amount of hazardous waste is generated according to regulations, which is driven around for a lot of money without any sense or benefit. 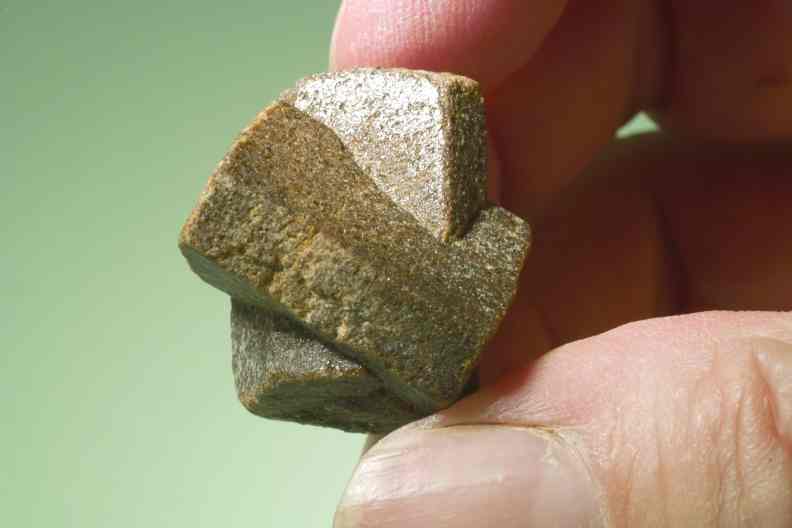 Large staurolite crossover twin after (232) found at Coray,
Finistere in France. Here also a crystal after one has not yet been made
known twin law, which is now known as the "Coray twin"
can be designated (NESPOLO & MOËLO 2019),
Image width 6 cm 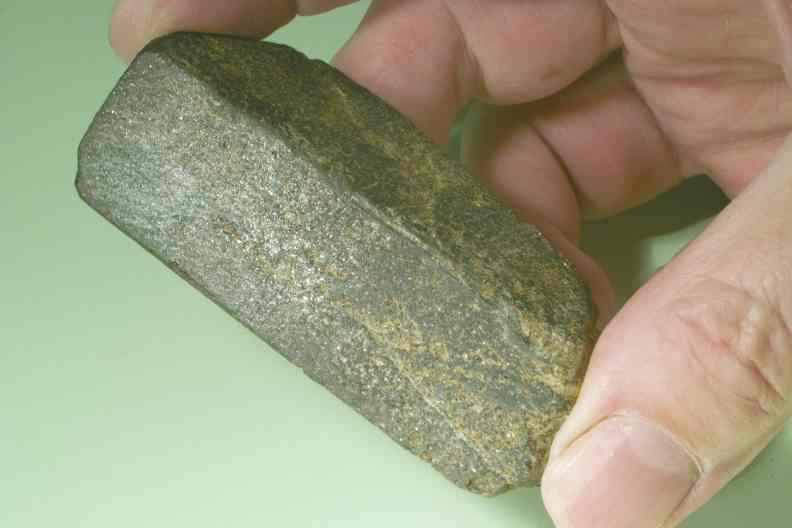 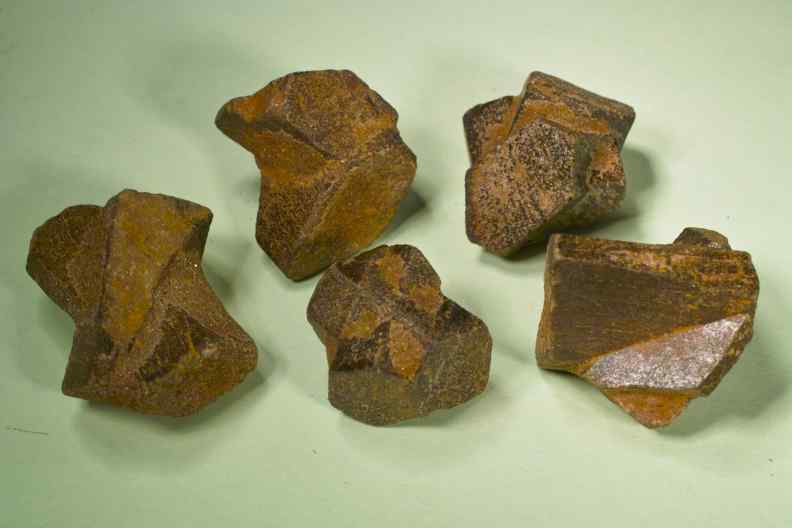 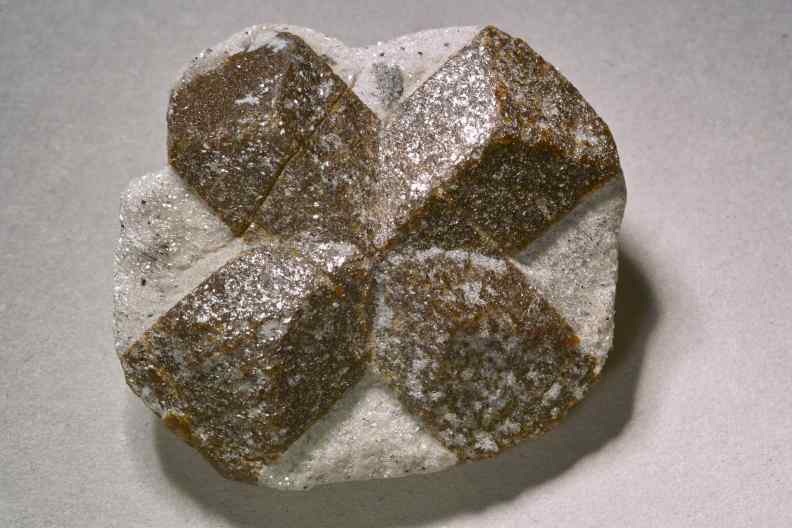 Cross-shaped fused staurolite twin from a staurolite
Mica schist (2.5 - 2.7 Ga years old!) From the Ploskay mountain (Semiostrovie)
in the Keivy Mountains in the eastern central Kola Peninsula, Murmansk Region,
Russia. The deposit is only approx. 100 x 100 m and has been around since 1979
known. The most beautiful staurolite twins in the world are likely to come from here
(LYKOVA. & PEKOV 2015). The brushed pieces from here will be on
offered to almost all mineral exchanges,
Image width 5 cm. 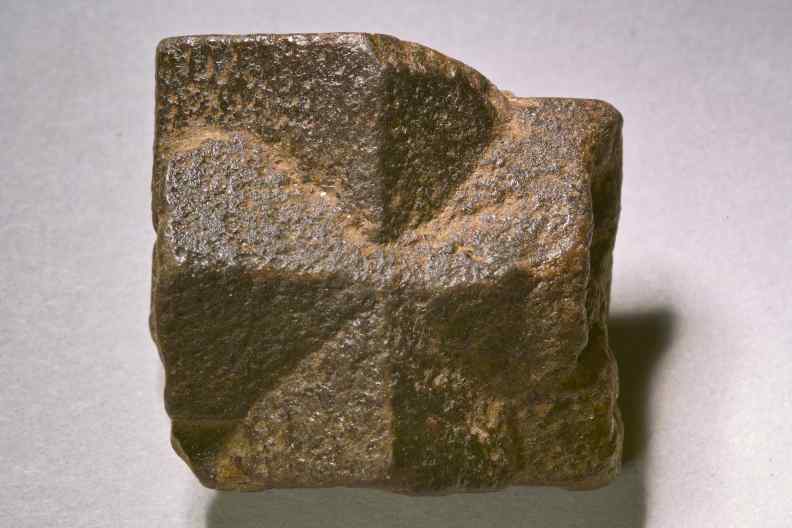 Crossing twin of a staurolite from Brazil (unfortunately without
details),
Image width 5 cm 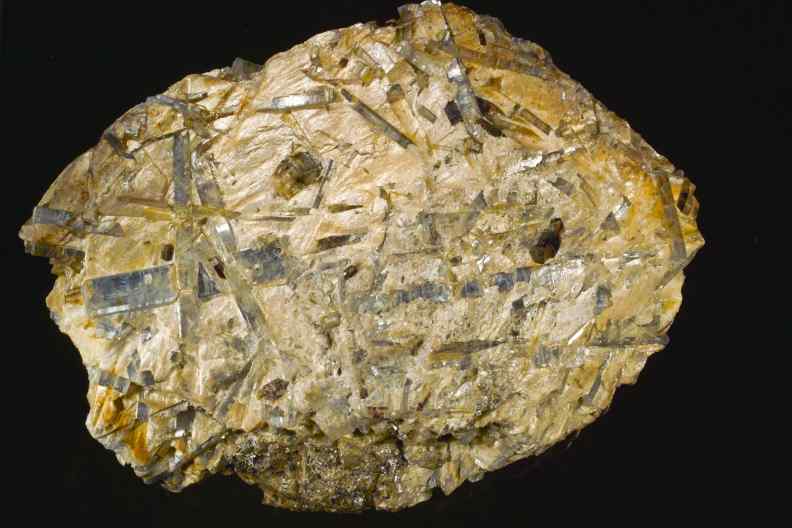 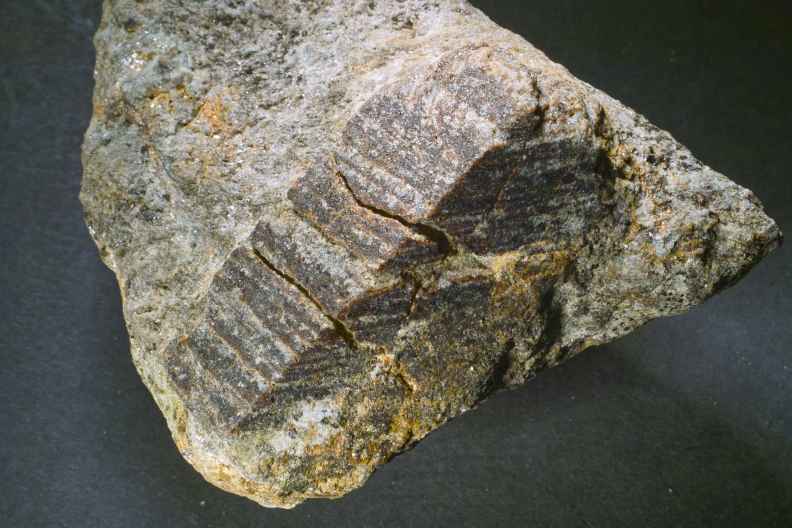 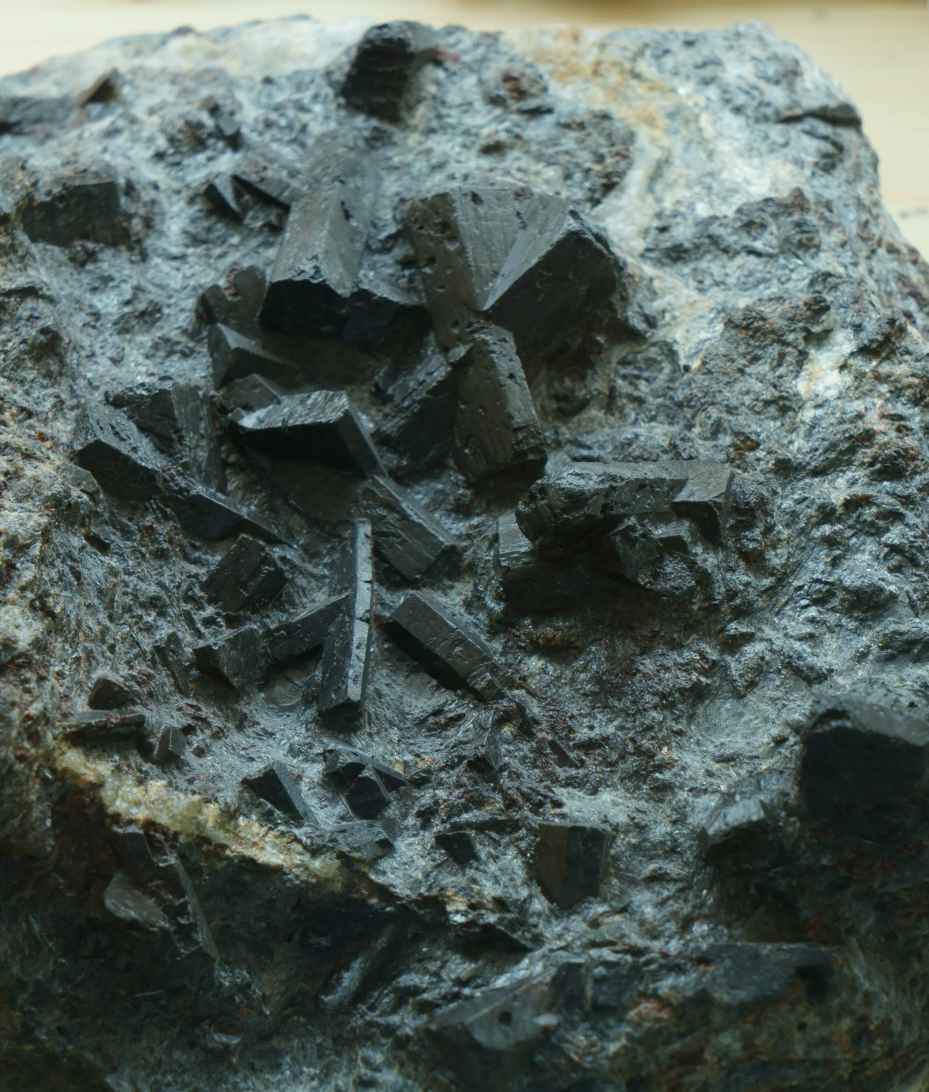 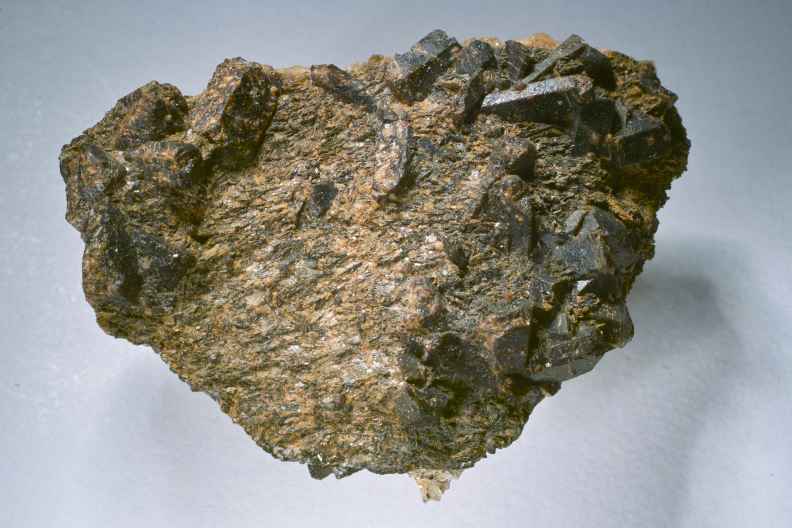 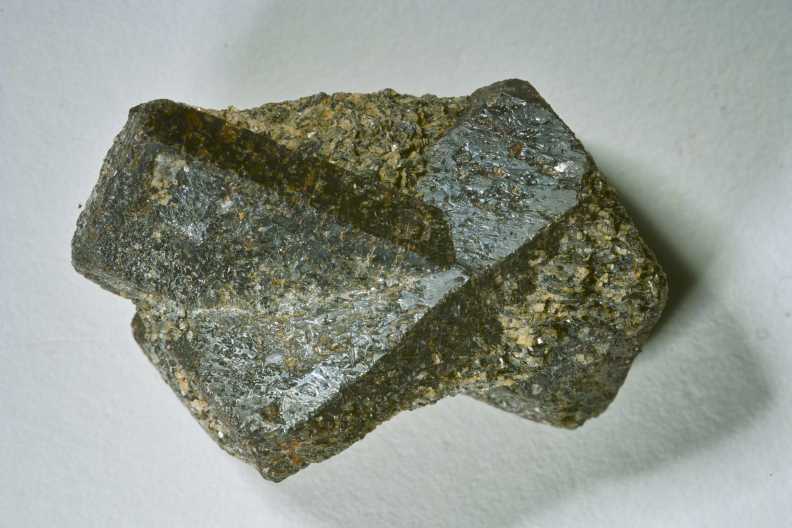 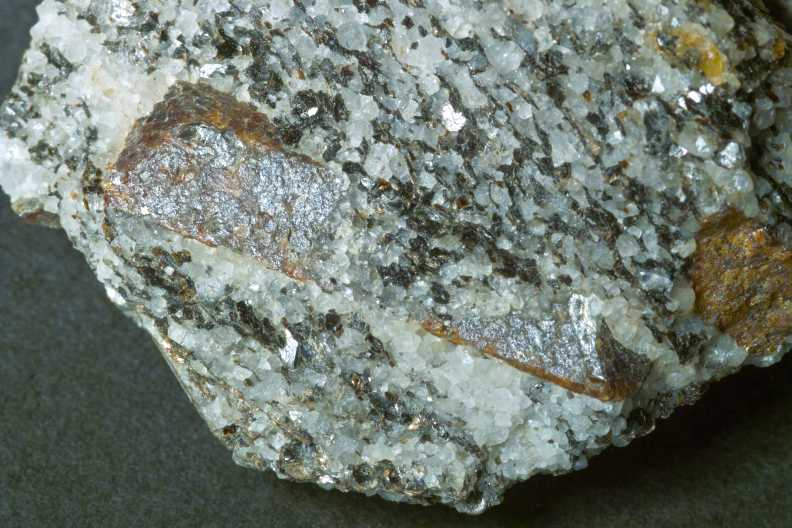 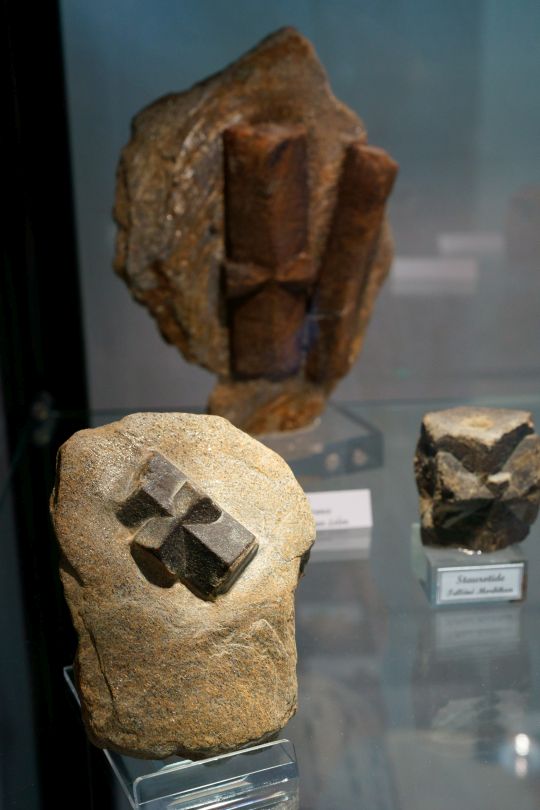 The special show at the large mineral exchange in St.-Marie-aux-Mines
2015 showed an impressive collection of beautiful,
large and mostly twinned staurolite crystals of numerous
Locations and supplemented by images of old literature,
Taken in the swimming pool on June 26th, 2015 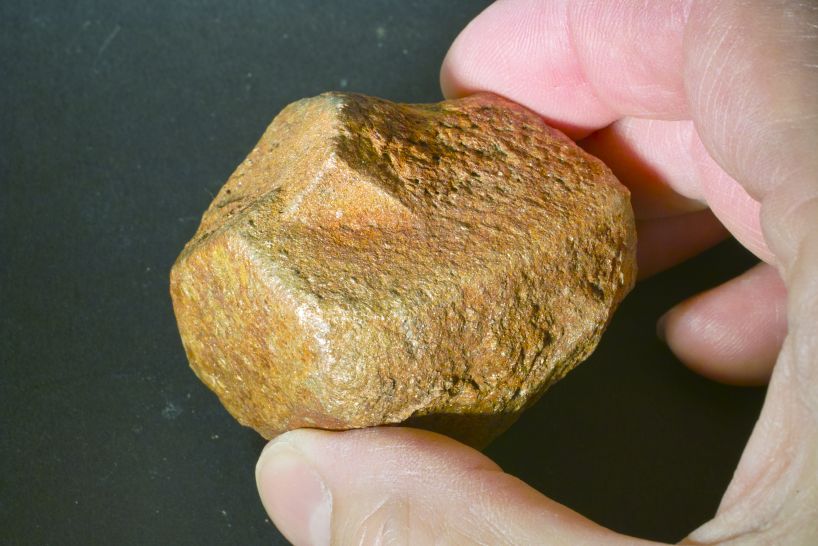 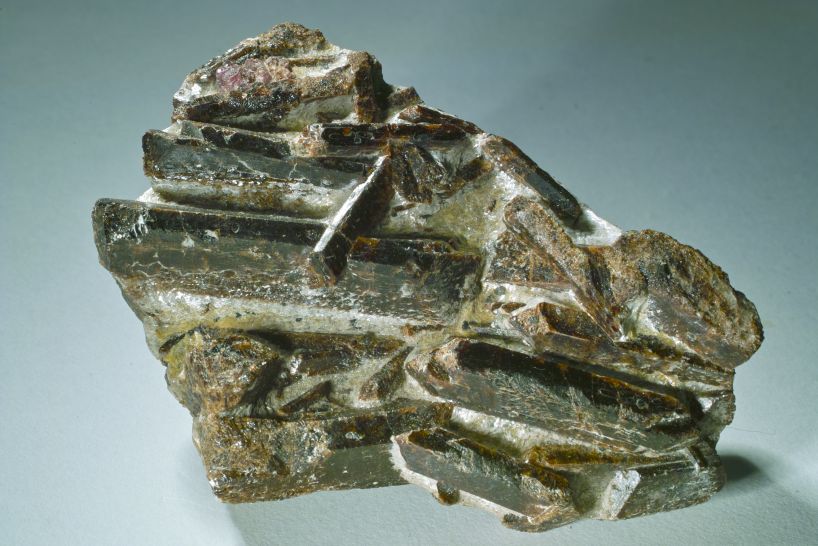 Back to the homepage or to the top of the page