To the gym despite the coronavirus pandemic?

Lars Holdorf grimaces. The teeth bared, the eyes narrowed, the forehead furrowed. The sweat drips from his chin. Another repetition, another, and then another. He sits at the biceps machine and gives everything. His strong arms keep pulling the machine's handles upwards, his biceps rears up and his head turns red. It doesn't look like fun.

But that is exactly what it is for Lars Holdorf. "Great!", He says with a smile and takes a breath after he has finished his workout on the biceps machine. "The gym is very important to me," he says, and you can only guess from his voice how much he missed the "pumping" function on the equipment. As a football player for the Bonn Gamecocks, he needs strength and mass to be able to throw himself into the ranks of the opponents. And fitness is part of everyday life for him. 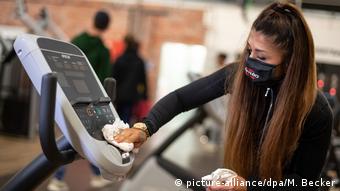 Disinfection is a new sporting discipline in the studios

His gym was closed for two months, like everyone else in Germany. People sweating close together - exactly that had to be prevented during the corona lockdown. The first fitness studios in Germany opened again this Monday. Initially only in the west of the country, as here in the former federal capital Bonn. The other federal states will follow in the coming days and weeks. And many neighboring European countries, where even stricter rules of conduct apply, look to Germany and ask themselves: can this work?

The easing path that Germany has taken is courageous. Because the number of infections has been rising again for a few days and Chancellor Angela Merkel is already warning not to gamble away everything that has been achieved through careless behavior. Germany is loosening the reins, people are coming out of their home refuges - and many are going back to the gym. 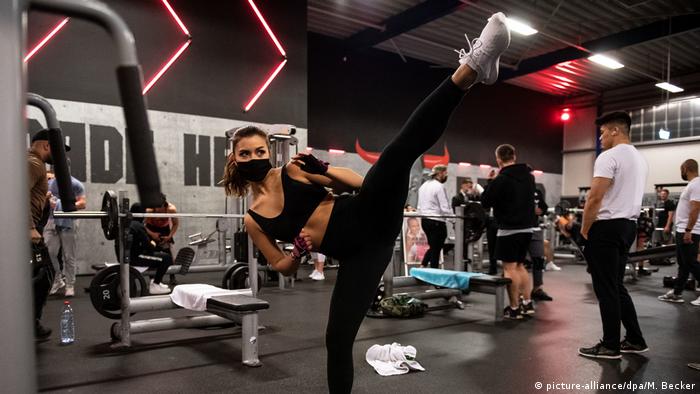 With motivation out of the crisis? Many Germans are still skeptical about the easing

Almost twelve million Germans visit the approximately 9,700 fitness studios in the country more or less regularly, according to statistics from the Employers' Association of German Fitness and Health Systems (DSSV). For comparison: According to the German Bishops' Conference, of the 23 million Catholics in Germany, an average of 2.1 million people attend Catholic services in Germany. For many people, fitness studios are an integral part of their everyday life. And they pay for it: The average monthly fee was 42.60 euros in 2019. This brings the industry in Germany a turnover of 5.5 billion euros - and thus also political weight. The DSSV lobbied for the fitness industry, which was and is hard hit by the restrictions of social life.

Some are happy, many remain skeptical

"That was a tough hit," remembers Max Walter. Tall, strong stature, short hair, lots of tattoos. He runs the Fivestar Fitness Studio in Bonn, one of 13 studios in the fitness chain. "Sunday came the message that we Have to close on Tuesday. We had to keep our costs to a minimum, it was a tough time. "That was true not only for the customers, but also for the staff: Twelve of the 19 employees in the studio lost their jobs. Almost all of them are students who deal with After a two-month break, the Bonn fitness studio is one of the first in Germany to be allowed to reopen - a great relief for Max Walter, who had to accept several resignations from members during the closure.

The restart is now only permitted under strict conditions. The gyms have to provide space, seven square meters per customer is the rule of thumb for the staff at the entrance. Long queues do not form in front of the studio in Bonn on this first day of opening. Probably also because many customers are still reluctant. 72 percent of those questioned stated in a recent YouGov survey in Germany that they will not go back to their gym immediately when it opens. A DW poll on Twitter produced a similar result.

That is why Max Walter knows that he has to convince his customers: "We ask every member to wash or disinfect their hands when entering. Members are asked to disinfect the devices, and our employees do that too. And we have the requirement that each device must be at least three meters away from the next, "he explains.

That works well on the first day, the customers take the hygiene measures seriously. For example Melanie Meger. The student came to training with her mother on the first day of opening because she "missed the gym very much". At home she lost her focus on training, but the atmosphere in the gym motivates her a lot. She's a little scared of getting infected, she says. "But I just try to stick to all the rules: I put on a face mask where it is necessary, I disinfect my hands and the equipment I use." She knows that highly intensive training such as maximum strength exercises or spinning are prohibited here, because you sweat and breathe too heavily.

Training only under strict rules 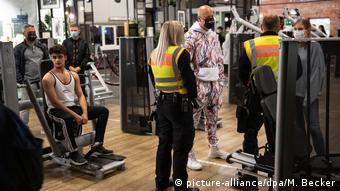 The public order office checks the hygiene measures in the studios

The operators of the fitness studios are aware: Only with these restrictions can they continue their business in times of the pandemic. As soon as a new outbreak of COVID-19 can be traced back to infections in gyms by the health authorities, the sporty relaxation exercises could quickly be over again. Sports physician Wilhelm Bloch makes it clear in a DW interview that he can only operate the fitness studios “under strict rules, equipment disinfection and with a limited number of visitors, so that minimum distance can be maintained without any problems, as well as well-functioning ventilation that prevents aerosol stay in the room longer ", can imagine.

Amateur football player Lars Holdorf takes this for granted. He has long since got used to the restrictions and hygiene rules in everyday life. And: "The infection numbers in Germany show that we can now take this step," he says. "I treat the others here in the gym with a respectful distance. If you stick to it, the risk is no greater here than when shopping in the supermarket."