Videos show how a gamer abuses and burns a suffragette in "Red Dead Redemption 2". The community is thrilled. 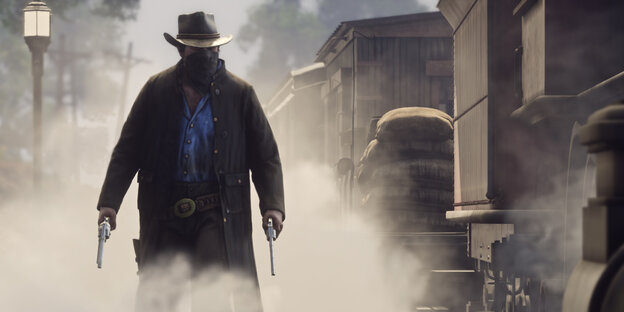 In “Red Dead Redemption 2” you can beat up, set fire to or shoot almost any character Photo: rockstargames

BERLINtaz | The setting is reminiscent of the 19th century in the Wild West. A historic suffragette stands on a busy street in the virtual city of Saint Denis, which is modeled after the real New Orleans. With loud shouts, she demands that women finally be allowed to vote. There is a sign next to her. On it is written: "Voting rights for women" and "Abolish discrimination". A man comes up to her. "Hello my friend. What do you think of the right to vote for women? ”He is asked by the women's rights activist. The man answers cynically, pushes her and finally knocks her to the ground.

In the open-world video game "Red Dead Redemption 2", players can address, rob, beat up, set fire to or shoot almost any character. A particularly popular destination: the historic suffragette from Saint Denis.

Because after the first video was so successful, Shirrako released two more clips with misogynistic content. In one of the videos he tries to feed the suffragette to an alligator. In the other he catches it with a lasso, then places it under a train and then sets the corpse on fire.

Sections of video game culture not only have problems with outdated gender stereotypes, but also with sexism. At least that's what the shocking comments under the videos reveal. Some members of the community just find the videos hilarious. Others feel encouraged by them to express themselves openly misogynist and derogatory. One user writes, “The only good feminist is DEAD FEMINIST”, while another comments on the video with “Thats the best answer to feminism!”.

YouTuber Shirrako distances himself from the comments posted under his videos. In a conversation with Motherboard he said: “Of course I disagree with the sexist comments. But I can't do anything against them either. I don't want to censor the opinion of other people - regardless of whether I think the same way or not. ”Why Shirrako put the videos with misogynistic content online in the first place remains an open question. He just uploaded a funny moment from one of his streams as a video, he says.

YouTube reacted to the criticism and deleted the videos and Shirrako's account. But only for a short time. The channel is currently back online.