People with borderline personality disorder often have a long history of unhappy love relationships, breakups, and reconciliations. Their friendships also follow a similar pattern: Sometimes they are very close to a certain person, spend a lot of time with them and idealize them, then again they fall apart so badly that the friendship breaks up. Difficulty getting on with other people is the most persistent symptom of borderline personality disorder (BPD). According to a longitudinal study by John Gunderson and his colleagues at Harvard University, 85 percent of patients no longer met the diagnosis after ten years. Unfortunately, they were still not really healthy: The majority still had major problems in partnerships, friendships, with family or colleagues.

The relationship problems are related to the fact that people with borderline personality disorder experience very intense feelings: Even small things can cause them great fear, guilt, shame, anger, sadness or pronounced self-hatred. Such outbursts of emotions occur several times a day and often alternate very quickly. Not only are they stronger than those of healthy people, but they also last longer, which is why they sometimes overlap and add up. As a result, those affected get into a highly uncomfortable state of diffuse tension, which they can no longer assign to a specific feeling - and want to end as soon as possible. 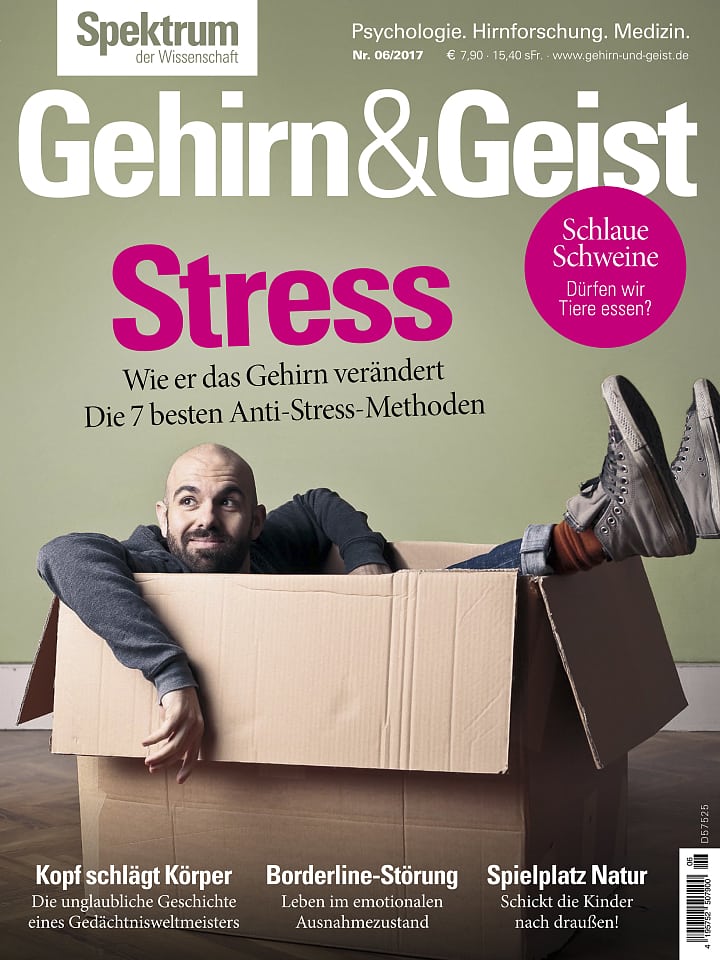 In a meta-analysis published in 2016, we investigated the extent to which the brain of people with borderline personality disorder processes emotional stimuli differently than that of healthy people. Together with Lars Schulze from the Free University of Berlin, we evaluated 19 studies with functional magnetic resonance tomography. The result: the patient's left amygdala reacts more strongly to negative images, words and faces than that of healthy subjects. This brain region plays a key role in the development of feelings. In addition, compared to healthy people, those affected have a less active dorsolateral prefrontal cortex, which plays a key role in the regulation of emotions. This could explain why they are poorly able to deal adequately with their tension and strong emotions.

Patients often dampen their violent emotions in an unhealthy way: for example, they harm themselves, consume excessively alcohol or other drugs, drive riskily, spend uncontrollably or overeat. Such behavior can actually relieve the inner tension for a short time. In the long term, however, it harms the body, the financial situation or professional success.

Due to the intense feelings of the patient on the one hand and the lack of skills to deal with them appropriately, on the other hand, permanent emotional instability arises. It can burden relationships, but sometimes also enrich them. In therapy we usually talk about the downsides that this "rollercoaster of emotions" brings with it. At the same time, however, many who work or live together with an affected person find the connection very deep and lively.

When we interact with our fellow human beings, it is particularly important to be able to name and influence our own feelings. We express our feelings, needs and desires so that others can understand us. We also assess what the other person feels, thinks and wants. We control how close someone should get to us and know when we need distance. We have to resolve conflicts and deal with disappointment and rejection. Borderline patients are overwhelmed by all of these situations. They then react, for example, irritable and angry or withdraw. In a study published in 2017, Johanna Hepp from the Central Institute for Mental Health in Mannheim and colleagues recorded the well-being of those affected several times a day for 27 days using a smartphone app. The results show the vicious circle from which it is difficult for patients to get out: Many respondents stated that they feel angry or sad at the moment. As a result, they often got into arguments with or were rejected by others, which in turn increased their negative emotions.