How to run properly

The right footrest when running 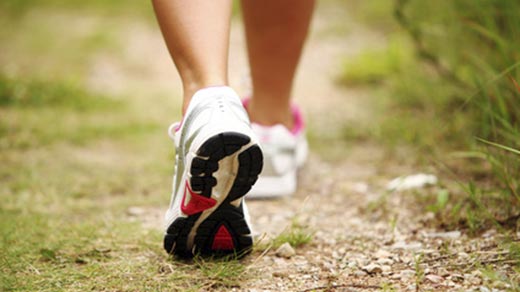 Shouldn't we run as we walk? Then the healthiest thing would be for us to hit the floor with our heels and roll forward to our big toe before moving on to the next step. This movement is called heel running and it seems so natural to us. And heel running is what novice runners usually do right from the start.

The only thing is: walking and running are two distinctly different sequences of movements. When walking, for example, there is no phase in which one foot is not on the ground and supporting the body. On the other hand, when running And so it happens that when running, two to four times the impact force acts on the body as soon as it touches the ground.

Now running is by no means alien to us humans. On the hunt or on the run - humans have always been designed to set a higher pace. The body therefore has a suspension in the foot: the medial arch of the foot. Roughly and unmedically speaking, this is the area between the ball of the foot and the heel.

But if you come up with your heel first while running, as when walking, a large part of this suspension is lost, the force of the shocks continues in the body - for example down to the knees, hips, back and so on. And that is exactly what can lead to pain, wear and tear, and injury.

So aim for a different footrest when running?

The three ways of walking

When running, we know three different types of footrest:

How do the top runners run?

An examination with high-speed cameras during a half bamarathon showed how the first fifty runners put their feet on the 15 kilometer.

The result: the heel running style still dominates at the very front of the field (see illustration). So it is by no means the case that the faster and more experienced the runner, the more forefoot.

Nevertheless, one could almost think: the further ahead, the better. Nothing is more springy than coming up with the ball, right? However, the runner gives away at the Forefoot rolling and straining the calf muscles and the Achilles tendon excessively. That is why the forefoot walking style is not necessarily the healthier one - and it is certainly not "natural" per se. But for sprints and short distances, it can certainly ensure high speed.

And the heel? Is it as bad as it is often done? Neither. Because the Heel run is quite economical and therefore a good choice, especially for long journeys. However, ligaments and bones are heavily stressed. This does not have to be bad at first, but can lead to problems - especially in connection with a severe buckling of the foot. In addition, the heel walking style can only be mastered longer in connection with cushioned shoes.

The compromise is made by Metatarsal It is considered to be both reasonably healthy and economical. It is also suitable for distances up to a marathon.

However, everything has to be practiced except walking on the heel - and that is precisely where there is a danger: too fast and uncontrolled adjustment can lead to overload. So what to do

Conclusion: not one style, but all

So there is nothing wrong with the heel walking style, especially at the beginning the athlete should be able to just start running - keyword: fun in movement. It is important that the athlete is already wearing suitable footwear. Also with support and cushioning.

The problem lies precisely in this cushioning: the more cushioned, the lazier the foot becomes. Going barefoot and exercising moderately in the other variants is ideal. Then there is the ABC of running and stretching.

In the end, you should be able to master all three styles and call them up for the respective purpose.

One answer to "the right footrest when running"