A career at IPS in India 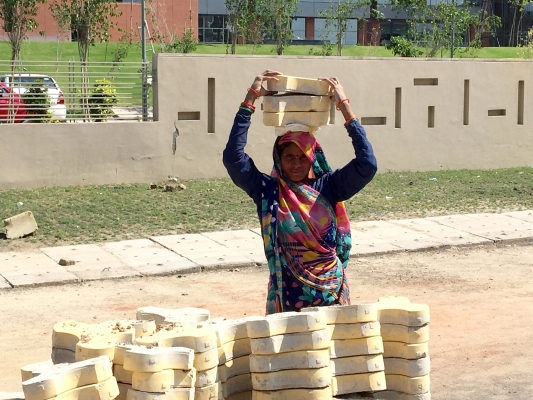 The mechanization of industries such as construction makes it more difficult for women to find a job
Image: © Neeta Lal / IPS

New Delhi, April 2 (IPS) - India likes to call itself the "greatest democracy in the world". The 380 million women of working age might disagree. New research shows that only about 125 million of them are in paid work. And since 2004 the number of women in employment has been falling.

Experts see this development as a warning signal for Asia's third largest economy. If the country with around 1.2 billion inhabitants did not guarantee equal opportunities for women, it would fail to achieve fundamental development and poverty reduction goals.

According to a report published by the International Monetary Fund (IMF) at the beginning of March, the labor market participation of women in India is lower than in almost any other emerging market. According to this, only 33 percent of all women of working age are working or looking for a job. On average, the proportion in East Asia is almost twice as high at 63 percent. The global average is around 50 percent.

Hardly any women in boardrooms

There is currently heated debate in India about why there are fewer than five percent women on the boardrooms of companies. This is a lower percentage than in all other member states of the so-called BRICS group, which includes Brazil, Russia, India, China and South Africa.

In 2013, a new law was passed in India that requires all companies listed on the stock exchange to appoint at least one woman to the board of directors from August 2014. However, the deadline has now been extended to April 2015, as only a few companies have met this requirement.

Due to the lack of working women, India is wasting a great opportunity for its economic growth, the managing director of the IMF, Christine Lagarde, criticized during a recent visit to India. Economists see equal rights for women in the world of work not only as a sign of political correctness, but also as an economic imperative.

According to a 2013 IMF study, the country's growth is slowed by the exclusion of women. "If the gender gap can be halved by 2017 and reduced to a quarter of its 2008 level by 2027, India's per capita income will increase by ten to 13 percent," the report said.

According to some, the main reason women are invisible in work is because they are not included in statistics on the informal sector. Most Indian women do unpaid housework on a regular basis. Their contribution to the gross domestic product is thus neglected.

"A woman's work in her own household is not counted as part of economic performance. Thus, they are worse off than the paid domestic help, whose work is seen as a contribution to the national income," explains Preet Rustagi, director of the Institute for Human Development in New Delhi . "They cook, take care of older relatives and raise their children. In rural regions they also look after the cattle. This work of theirs does not appear in the statistics either."

Experts see women's access to the labor market also being hampered by cultural norms. The patriarchal Indian society sees women primarily as housewives and mothers, explains Bhim Reddy of the 'Indian Journal of Human Development'. On the other hand, he sees one reason for the falling number of working women in the fact that more girls and young women are attending schools or universities.

According to a study by the investment firm 'Everstone Capital', although more female students are enrolling at universities, the proportion of female university graduates with a university degree in working life has remained low at 22 percent. Even the proportion of women without school education who find a job is higher.

The integration of well-educated city dwellers into working life is also surprisingly low. According to official figures, 57 percent of all working Indian city-dwellers with a higher level of education only did household chores in 2009/2010. This was the case for only 31 percent of women in rural areas with primary and secondary education.

According to experts, the continued introduction of new technologies in agriculture and construction has resulted in a preference for male workers.

The situation is made worse by exploitation and harassment in the workplace. India passed a law against sexual harassment last year, which obliges companies with more than ten employees to set up a complaints office. But according to a study by Jawaharlal Nehru University, less than 20 percent of employers in the capital New Delhi adhere to the requirement.

Surveys show that a more women-friendly work environment would encourage more Indian women to work outside the home. For example, if they could feel safer on public transport and in the workplace, more women would choose to work full-time. (End / IPS / ck / 2015)