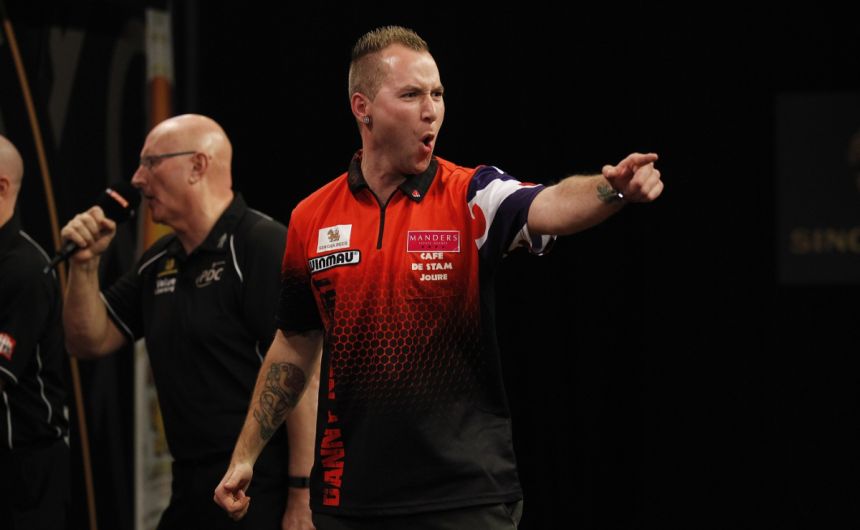 Final day of the Finder Darts Masters 2017 at the Hotel Zuiderduin in Egmond aan Zee, the Netherlands. The men’s quarter-finals, semi-finals and final were played today. The final was on the program of the women's and junior tournaments. The mode was changed, so today was played in sentence mode.

In the first quarter-finals, Scott Mitchell prevailed against the Lithuanian Darius Labanauskas. Mitchell took the lead 2-0. In the third set, Labanauskas led 2-0, but did not bring the third leg over the finish line, so it was a clear 3-0 win for the former world champion.

Then the two Dutchmen Willem Mandigers and Danny Noppert faced each other. Mandigers grabbed the first set, but then the World Cup finalist became stronger and was able to turn the game in his favor. In the end, a 3: 1 success for Noppert, who is back in the semifinals of this tournament after 2015.

Englishman Jamie Hughes won the quarterfinals number 3 3-0 against Wesley Harms from the Netherlands. The first sentence went into the decider, which Hughes won. The other sets were very clear with 3: 0 and 3: 1.

The last quarterfinal match was played by former world champion Scott Waites and Welshman Jim Williams. The first set went clearly 3-0 to Waites, then Williams got two sets in a row before Waites could equalize and force a decisive set. Williams opened and took the lead 1-0 and 2-1. Then Waites did not start well in his own leg, Williams worked out two match darts of which he was able to accommodate the second dart in double 10 to win.

The round of the last four started with a perfect chase by Danny Noppert against Scott Mitchell. The Englishman started much better and was quickly 2-0 ahead in sets. With a 3: 1 in the third set, Noppert got back into the game and shortened. In the fourth set two match darts from Scott Mitchell, which he missed. Danny Noppert with a break in the decider and so he forced a decision sentence. The Dutchman won this decider 3-0 and then celebrated the much-acclaimed final in front of the home crowd.

In the second semifinals, Jim Williams won against Jamie Hughes. The first set went to Williams after Hughes dropped several set darts. The second set was then clearer, Williams also won this 3-1. Hughes fought his way back into the game with a 3-1 in the third set before he even managed to equalize the set. In the decisive set, the first three legs were in sequence, then Williams with a break to 3-1 and to win the match.

In the big final for the coveted title and around 5,000 pounds of prize money, the Dutchman Danny Noppert and the Welshman Jim Williams faced each other. The Dutchman grabbed the first set after a bull finish with 3-1. Set 2 was a clear affair for Williams, who equalized 3-0 to 1-1. The Welshman went one better and took the lead 2-1 after two breaks. Set number 4 went back to Noppert with a smooth 3-0 to make it 2-2. The following set was again very competitive and was only won by Danny Noppert in the decider. Williams made up a 0-2 deficit in the sixth set and won the set 3-2 to equalize again.

In the decisive phase, Noppert was able to present again and win "his" set with 3: 2 for a 4-3 lead. In the 8th set the Dutchman started with a break and then had every chance to win the match. He succeeded and he won the set 3-1 to make it 5-3. Much to the delight of the Dutch fans, who celebrated a home win at this tournament for the first time since Raymond van Barneveld in 2004.

The English played in the junior final (U18 tournament) Jarred Cole and the Scot Nathan Girvan. In a brisk game with a good level, the first set after a lightning start went 3-0 to Cole. An even game in the second set. In the decision leg, however, Cole prevailed again, who was able to win a title at a TV tournament for the first time in his career. Jarred Cole is the successor of Justin van Tegouw, who recently won this tournament twice.

In the women's final, the local hero Aileen de Graaf and Deta Hedman faced each other. The first set went confidently 3-0 to the Dutch woman. Hedman missed countless darts on the doubles and never found his way into the match. De Graaf had an easy game and was able to get her second title at the Finder Darts Masters with a smooth 3-0 in the second set, after the success of 2013.

This ends the year 2017 for the BDO and WDF players. From January 6th to 14th, 2018, the BDO World Championship will continue in the legendary Lakeside Country Club in Frimley Green.

If you would like to see this tournament on site, you can book a trip as a complete package through our travel partner for 2018.

back to overview: Dart News from dartn.de | RSS feed