This is how fruitarians eat

What do fruitarians eat? 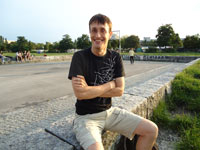 Fruitarians like Bert Rutkowsky (41 / photo) from Berlin, they probably eat according to the strictest rules, not even plants may be destroyed for their food. Bert Rutkowsky therefore only puts food on the table that can be picked from the plant. These include nuts, fruit, for example apples or berries, vegetable fruits such as tomatoes and pumpkins, or legumes such as peas or beans. But potatoes, beets, onions or cabbage are not allowed to be eaten. Because these foods are root, tuber, leaf or stem parts. The plants would be destroyed when harvested.

Are there exceptions to the diet?

Grain products are actually allowed for fruitarians. However, some followers still do without grain because it is grown in monocultures. Bert Rutkowsky, on the other hand, is not that strict about it: “Grain plants end their life on their own after the seeds ripen.” If the grains have not yet germinated, no new life has emerged.

Why do they impose these rules on themselves?

While many people can still understand the reasons for a vegetarian or vegan diet, it becomes more difficult with the Frutarians: Why do people impose these ascetic dietary rules on themselves? For Bert Rutkowsky there are ethical reasons. He doesn't want any living thing to be killed for his nourishment. According to his own statements, he developed this attitude at the age of ten. It was then that he learned that all the chickens were to be killed on his grandfather's farm. The grandfather moved to town. Bert Rutkowsky decided to pay more attention to animals. At first he only ate less meat, later he became a vegan and in 2000 he finally became a fruitarian. He sees this as a logical step: “For me, plants have the same right to exist as humans or animals. And that's why I don't want to let her die for me. "

Bert Rutkowsky would like to live in harmony with nature. He therefore extends his rules to other areas of life: Even for furniture, no wood should be destroyed if possible. But if it comes from a fallen tree, he would make an exception.

What do nutrition experts think of frutarians?

Rutkowsky says he had a vitamin test only recently. Everything was fine. Nevertheless, doctors warn against the frutarian self-restraint. "The more dogmatic the diet, the higher the risk of undersupply," says nutrition expert Prof. Claus Leitzmann. Compared to vegetarians or vegans, the choice of food is considerably limited, especially with frutarians.

How many fruitarians are there?

According to Leitzmann, it is not possible to say exactly how many fruitarians there are at the moment. The best known was certainly Steve Jobs, if that's true. The co-founder of the Apple group is said to have lived exclusively on fruits for a while in the 1970s. This is how his later company supposedly came up with the legendary logo with the bitten apple.