Share the Internet connection with your neighbors - that's how it works 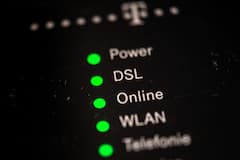 Share WiFi with neighbors - this is important to note
Image: dpa A normal DSL internet connection is available from around 20 euros a month. For connections with data rates beyond 100 megabits or cable connections for single-family houses, however, it becomes more expensive. Wouldn't it be a good idea to share the connection with neighbors or roommates?

Share the internet connection? This is possible and is part of everyday life in many shared apartments. From a purely legal point of view, nothing speaks against it, says Berlin lawyer Prof. Niko Härting. "There is no ban on sharing your WLAN with others." Only the general terms and conditions of many Internet access providers (ISPs) preclude making the connection available to others in return for payment. So there is no penalty, at most termination by the provider.

Share WiFi with neighbors - this is important to note
Image: dpa If you want to let others surf, you have to make a few thoughts beforehand: for example, which technology you want to use. The simplest solution is to simply reveal the WiFi password to roommates or neighbors. Then you can join the network. The WLAN should always be password-protected. The Federal Office for Information Security recommends a complex password with 20 characters or more and WPA2 encryption.

If the reception in the neighboring apartment is insufficient, a repeater or additional access point amplifies the signal. Modern mesh WLAN solutions from manufacturers such as AVM, Netgear or Google Wifi also supply larger areas with WLAN networks.

But just letting others use your WLAN is not necessarily the best solution. "You don't want to share all the resources, just the Internet connection," says Ernst Ahlers from the specialist magazine "c't". Because devices in a network can see and communicate with each other. Not everyone wants that. The solution is called: guest network.

More and more router manufacturers are already offering this second simplest solution ex works. In addition to the normal radio network, a second network is set up. "This has the charming advantage that you can withdraw your neighbors' access again," says Ahlers. Another advantage: In the guest network, you can often set the internet speed of the co-users or, for example, only enable e-mail and website visits. Communication between the devices in the network can also be blocked. In this way you keep control over the activities of other users and - ideally - you don't have to fear any trouble due to illegal file sharing or downloads.

Even safer: set up a router cascade

Somewhat more complicated, but technically the cleanest is the so-called router cascade. A modem or router establishes the connection to the Internet, explains Ernst Ahlers. All other users connect their own WiFi router to it using a network cable. The advantage: Everyone can set up their own access the way they want. With a little work, several IP telephone connections can be operated with their own telephone number, so that you do not have to share the main connection.

However, the router cascade can also have pitfalls. The two methods currently used for assigning an IP address, IPv4 and IPv6, can cause problems with the router behind the router when streaming or playing online games. The response time of the Internet connection can - in some cases - go into the basement.

Illegal activities by co-users - what to do?

But what if the co-user does illegal things over the Internet connection? Therefore, if a warning flutters in the house, you are obliged to name the co-users, says lawyer Härting. But then the other side has to prove who caused the damage. As a WLAN operator, you are not liable. And: "There is no obligation to record the activities of others in the network."

How fast the shared connection should be depends on how the network is used and how many users there are. If you are practically only surfing, you can also share a slower DSL access. If all connected users want to stream HD videos, things look different. "It shouldn't be below 16 Mbit / s," says Holger Bleich of the "c't". "Otherwise, parallel streaming is not possible. For parallel 4K streams, correspondingly 25 Mbit / s and more are required. And downloads such as updates for the PC or mobile devices should also be considered and capacities planned so that there are none in the shared network in the end Data congestion there.

In a separate guide, we explain how to set up a WLAN.