Can you have a negative electrical charge

This article deals with the electrical charge on bodies. We also deal with units and terms such as coulomb, elementary charge and current strength.

In order to understand the electric charge, one has to take a look at the basics of physics and chemistry. Or to be more precise: we have to take a closer look at the structure of an atom. Put simply, an atom consists of an atomic shell in which there are electrically negatively charged electrons. In the atomic nucleus, on the other hand, are the electrically neutral neutrons and the positively charged protons.

By nature, substances are not charged to the outside; one then speaks of electrically neutral. On the other hand, if a body has more electrons than protons, it is negatively charged. And vice versa: If a body has more protons than electrons, it is positively charged. An electron has the smallest electrical charge, which is called the elementary charge.

In order to be able to calculate with charges, the coulomb was defined. A coulomb is the electrical charge that is transported through the cross-section of a wire when an electrical current of 1 ampere flows for 1 second. The equation looks like this:

annotation: The terms current, voltage and resistance will be examined in more detail in a subsequent article.

In addition, the charge on a body can be calculated using the following equation. The elementary charge is e = 1.602 · 10-19 C.

A small sample calculation should clarify the use of the formula. Here we have a negative charge of 0.5 C and want to calculate the electron excess. 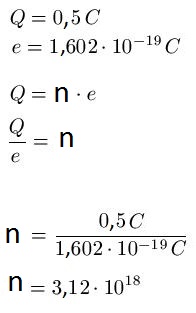 In addition, there is another formula with which the current strength, the charge and the time can be related.

A current of 0.5 A is maintained for half an hour. The load moved must be calculated. 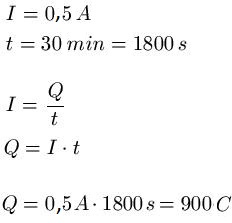