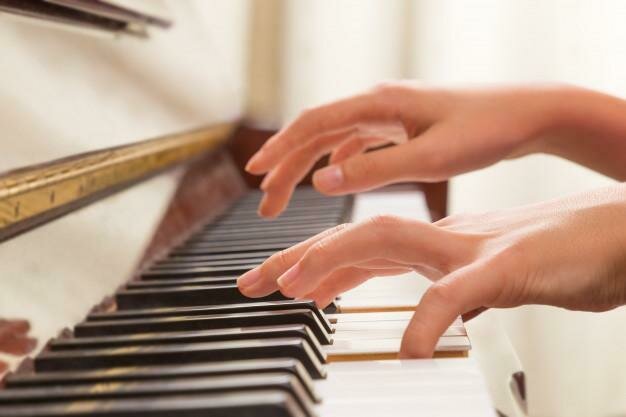 The piano (from clavis: key), formerly also pianoforte or more rarely fortepiano, today often piano for short, is a musical instrument invented in Florence at the end of the 17th century, in which small hammers are struck against strings by a special mechanism at the press of a button. In terms of operation, the piano is therefore a keyboard instrument, in terms of the type of excitation it is a percussion instrument and in terms of the vibrating medium it is a stringed instrument. The modern main forms of the piano are the grand piano (English grand piano) and the pianino (English upright piano).

Regardless of whether you are learning to play the piano, harpsichord or church organ - the keyboard instrument is an exciting adventure. The piano is a harmony instrument, so it is practically independent of the interaction with other instruments or singers. But it is all the more in demand as an accompanying instrument. Whether the student strives for a career as a solo pianist or as a companion is up to them. The tonal and stylistic variety for these instruments is immeasurable, the literature as good as inexhaustible, as many compositions were also arranged for piano.

The piano does not differentiate between serious and popular music, in every style it is an important part of the music.

The starting age for piano lessons should be between the ages of six and ten. However, if you have a recognizable talent or special interest, it is also possible to start earlier. There is no such thing as "too late".

costs: from approx. 1,000.00 euros. We recommend consulting the teacher beforehand.

Information and advice from Heidi Reiter.

An electronic keyboard in the broader sense is an electronic keyboard instrument that has emerged from electronic pianos and organs, the tones of which are generated and amplified electro-mechanically, electronically or digitally. In a narrower sense, a keyboard only describes those instruments that typically have 61 keys derived from the organ keyboard and the characteristic feature of an automatic accompaniment, the arranger keyboards. The players of this instrument are often called "solo entertainers" or (euphemistically "entertainers"). Since the further definition, due to historical development, does not allow any differentiation to the electronic pianos, synthesizers or home organs with regard to sound generation and equipment, reference is usually made today to the narrower one. In linguistic usage, keyboard is occasionally used for master keyboards and generally for all electronic keyboard instruments as anglicism in its original meaning. In the names of the instrumentalists in a band, "keyboarder" stands for all players of a keyboard instrument that is not a piano or grand piano. Keyboards in the narrower sense are smaller and lighter than this due to the less extensive and lighter keyboard compared to an electric piano, from which the term portable keyboard is derived. Making music with the automatic accompaniment requires a different playing concept and the organ keyboard a different playing technique than a piano. For this reason, a keyboard is very different from an electronic piano or a piano.

Here, too, it would be ideal if the student had their own instrument to practice the material to be learned at home.

costs: from 300.00 euros advice from a specialist teacher makes sense.