Has the Gulf Stream changed course? 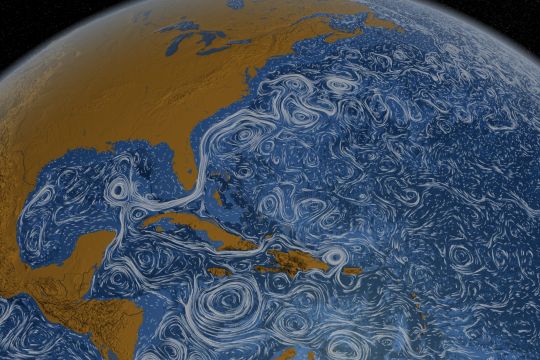 A Europe without the Gulf Stream? That means: all of Scandinavia is under an ice sheet, and in Hamburg or Berlin there is a Siberian climate. The polar cold air falls mercilessly over Europe, because there is no temperature-controlled northern sea water that warms the arctic winds before they reach the mainland.

The scenario makes it clear: The natural "heat pump" - the Gulf Stream and its extension towards Europe, the North Atlantic Current - is an elixir of life for Northern and Central Europe.

The current transports gigantic amounts of warm water from the Gulf of Mexico to the northeast across the Atlantic, past the coasts of Great Britain and Ireland up to northern Norway. In front of Greenland, the water then sinks into the depths and, when cooled, flows back south.

Without this circulation system, Northern and Central Europe would have a climate comparable to Alaska. Since its abrupt formation around 15,000 years ago, at the end of the last Ice Age, the system has been stable within certain limits. But it is now clear: the pump is already running much slower.

The Gulf and North Atlantic currents are part of a widely ramified current system in the world's oceans. The Gulf Stream system transports up to 150 million cubic meters of water per second: more than 100 times as much as flows into the oceans via all the rivers on earth.

The heat that the current carries with it corresponds to the output of around a million nuclear reactors. This comparison makes it clear why a possible drying up of the circulation would have a major impact on the northern hemisphere - and why climate researchers refer to the Gulf Stream as one of the tipping elements in the Earth system.

Data from thousands of measuring buoys

The name Gulf Stream was coined by the American all-round genius and statesman Benjamin Franklin. Franklin was the first to have a map of the ocean currents in the Atlantic made in 1770. The Spanish navigator Juan Ponce de Léon is considered to be the discoverer of the Gulf Stream.

In fact, it was his navigator Antón de Alaminos who, on an expedition to today's Florida in 1503, noticed a huge ocean current that made it difficult for his ships to travel south near the coast. A short time later, Alaminos made use of the current by choosing a course for the way back to Spain, on which the route could be covered in the then sensationally short time of two months.

Nowadays the Gulf Stream and other thermohaline currents in the world's oceans are scientifically measured precisely. The international Argo program launched 20 years ago uses almost 4,000 automated floating buoys worldwide, a large part of which is in the Atlantic between Greenland, Scandinavia and North America, Africa and South America.

From there, the Argo buoys transmit the water temperature, salinity and currents, which are collected up to a depth of 2,000 meters. In the British-American measurement project Rapid, 226 instruments anchored on the seabed have been used since 2004 to determine the total current at the particularly suitable latitude of 26.5 ° north.

In order to be able to identify long-term changes, researchers use data sets on sea temperatures in the Atlantic, which have existed since the 19th century, as well as analyzes of drill cores from sediments on the sea floor, which provide information about the flow conditions in the past 1,600 years.

Climate models have long predicted that the consequences of the increased temperatures could endanger the stability of the Gulf Stream-North Atlantic Current system - up to a complete standstill.

It is feared that the warming of the oceans, a growing influx of meltwater from Greenland and more precipitation will slow down the sinking of warm water in the North Atlantic and thus its return to the Gulf of Mexico. Main reason: The relatively high salt content of the water, which also causes the sinking, would decrease due to the greater addition of fresh water.

In fact, several international research teams have shown that the overturning current in the Atlantic has already weakened and is now less than it has ever been in the past 1,000 years. Experts around Stefan Rahmstorf from the Potsdam Institute for Climate Impact Research showed in a study in 2018 that it has decreased by 15 percent since 1950.

"In absolute terms, this means a weakening of the current by three million cubic meters per second - an amount that corresponds to three times the discharge of all rivers on earth," explains Rahmstorf, one of the world's leading researchers in the field.

If the tipping elements in the climate and earth system are triggered, chain reactions can occur that would increase global warming in an uncontrollable manner. Scientists have identified 16 tipping elements that could even bring an end to human civilization as we know it. We present them in a series.

According to a study by British climate experts who reconstructed the overturning current over the past 1,500 years, the anomalous weakening of the North Atlantic Current began as early as 1850 and has intensified since then. The researchers estimate the minus at 15 to 20 percent.

The trends correspond "exactly to what computer simulations predict for a slowdown in the flow system," says Rahmstorf. He believes that a further slowdown is likely if global warming is not stopped between 1.5 and two degrees, as agreed in the Paris Climate Agreement. It is still unclear whether the feared complete failure of the Gulf Stream could occur.

However, even a weakened Gulf Stream system can have far-reaching consequences. Experts warn that if the trend continues, it could fundamentally change Europe's weather patterns. The changed temperature distribution in the sea influences the air currents and thus leads to low pressure areas and storms moving on different paths. For example, the risk of storms in Europe could increase.

Paradoxical consequences are also conceivable: A colder Atlantic, which is less warmed by the Gulf and North Atlantic currents, can trigger heat waves in Europe because this favors the influx of warm air from the south.