Amazon Echo Start: Why Many Don't Get Invitations 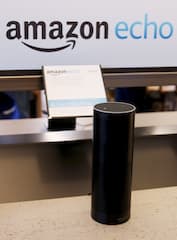 Amazon Echo - here the US model - is a long time coming from most interested parties in Germany
Photo: dpa It has been almost six weeks since Amazon presented its latest coup for Europe: Amazon Echo with the virtual assistant Alexa. In the US, Echo and Alexa have been available for a long time. Alexa should develop into a personal helper in the living room, but preferably in the entire apartment and thus in everyday life. In all situations, it should understand the owner, answer questions about the weather, raise and lower the electric blinds of the smart home in response to a voice command, or simply play music from Spotify on your own Sonos system.

Many customers have long faces

Amazon Echo - here the US model - is a long time coming from most interested parties in Germany
Photo: dpa As of today, Amazon Echo should be available in Germany - but only if customers have registered with Amazon beforehand. Then Amazon will invite its customers to buy the new product by email. Many Amazon customers must have checked their mailboxes this morning and missed this invitation in addition to the usual newsletters and one or the other spam email. Because, according to a report by Wirtschaftswoche, these invitations were sent out specifically to certain customers. It was not based on sales at Amazon or the speed of registration, but rather, for example, on the region of origin of the customers.

Those customers who are allowed to try Amazon Echo or the small offshoot Echo Dot these days are, according to WiWo, less regular customers than testers for Amazon - with the positive effect from Amazon's point of view that they even pay for the test. Because first of all, Alexa has to understand the German language. This is not only difficult for foreigners who want to learn German, it is also very regional. For example, the Duden lists Weggli, Bürli, Weck, Semmel, Weckerl, Rundstück, Weggen or Schrippe as alternatives for the word bread.

Alexa must be able to understand all of this. According to WiWo, the Amazon developers have therefore specifically selected those interested parties from whom they expect a strong accent or unusual grammar, for example due to their place of residence, who can challenge Alexa. Because only when Alexa really works nationwide and understands the people, the big market launch should take place.

According to the Wirtschaftswoche, there should be a few thousand invitations that are sent out to customers today. However, many have not received any and are trying to get Amazon to send out an invitation, for example via Facebook. But Amazon blocks here. Everyone who requested an invitation will receive one, according to the responses to the customers. Of course, Amazon does not say when the invitation will come. The WiWo assumes that in the second quarter of 2017 everyone can bring Alexa home.